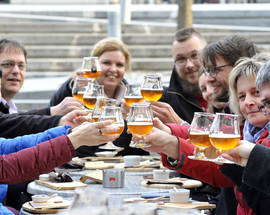 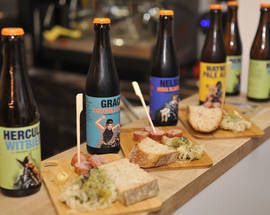 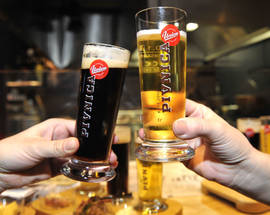 Locals love their beer, but Ljubljana's brewing tradition is far older than most people would imagine. In fact, it goes back some four millennium, which was proven by the discovery of 3,900-year-old beer barrels during excavation the Ljubljana Marshes, a UNESCO Heritage site just south of the modern city. The earliest known brewery in Ljubljana dates back at least to 1592, and by 1796 the city had six breweries, which all the more impressive since it had less than 10,000 inhabitants at that time. Meanwhile, recent years have seen a rapid growth in the popularity of craft beers made by different microbreweries in Ljubljana and its surrounding area. The Beer Experience Tour includes a stop in a local pub, with participants getting to taste eight different beers from five different breweries, two based in Ljubljana and three in other parts of the Central Slovenia region. Afterwards, the tour continues to the award-winning Brewery Museum at Pivovarna Union, where the popular Union beer has been brewed since 1864, and finishes at the brewery's own Pivnica Union pub.

Celovška 22
featured
/ljubljana/pivnica-union_132978v
It may have taken 150 years, but the wait was most certainly worth it. One of the ‘Big Two’ of Slovenian beer producers, Union’s pub is a welcome addition to the brewery complex. Located in the former workers canteen it retains this workingman’s feel, wr
see more
Featured

Celovška 22
featured
/ljubljana/union-experience-tour_145231v
Slovenians love their beer, and no beer is more popular in Ljubljana than locally brewed Union (pronounced 'oo-nee-yon' in Slovene). Founded in 1864 at a strategic location above a pure natural water source and near the railway tracks, today the brewe
see more
Featured

Adamič-Lundrovo Nabrežje 2
/ljubljana/ljubljana-tourist-information-centre_37961v
A small but extremely well-equipped resource with plenty of maps, lots of brochures in English, information about what’s on in the city and helpful advice on what to see and do in the region. Led by
see more

Krekov Trg 10
/ljubljana/slovenian-tourist-information-centre-stic_40079v
Ljubljana's central tourist office is a bit larger and usually less crowded than the main branch located a few hundred metres away opposite Prešeren Square, and they also helpfully stock heaps of maps, brochures and general information for the entire cou
see more