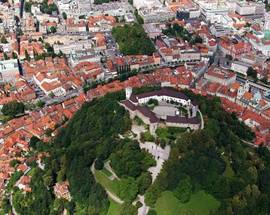 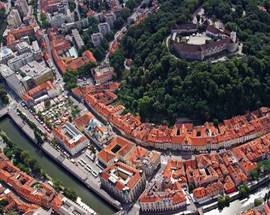 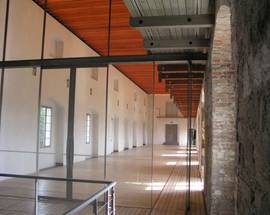 Take your kids to see the magical puppets at the Puppet Museum! Take a fun, interactive Time-Machine Tour with live actors. Easy access by foot or by funicular for a fancier ride.

Covid-19: If you are planning to visit Ljubljana Castle please check their website for the latest information. Click here to purchase tickets online.

Perched on top of Castle Hill (Grajska planota) and dominating the city skyline to the south, Ljubljana’s magnificent castle stands on the site of several former defensive buildings in a hilly area of land stretching away to the south of the Old Town. The castle in its current form was built by Emperor Frederick III of the Habsburgs in the second half of the 15th century. The fortress was used to consolidate Frederik’s influence in the area and to defend against increasing incursions of the Ottoman Army. Not unlike Kraków's Wawel Castle in Poland, Ljubljana Castle has served as both a royal residence, penitentiary,  military barracks and social housing over the centuries.

The current main points of interest for the visitor are the Viewing Tower (Razgledni Stolp), built in the 19th century and raised a further 1.2m by the government in 1982. The tower’s Virtual Castle screens a 12-minute film translated into more than 10 languages showing an interesting and informative history of the castle.

On the same floor find a small door that takes you to the top of the tower up some 100 red cast-iron steps, each individually decorated with an image of the tower and the city’s dragon. A door at the top leads to a small viewing platform (not for the faint-hearted) with wonderful views of the city.

Underneath the tower and located down a small flight of stairs tucked away through a doorway in the corner of the courtyard is the diminutive St. George’s Chapel (Kapela sv. Jurija), one of the oldest parts of the castle. By the order of Cesar's document from 1489 it was dedicated to St. George, the patron saint of Ljubljana and was renovated in the Baroque style and in 1747 decorated with the coats of arms of over 60 rulers, including Herman and Ulrich of Celje, Henrik of Gorizia County, and Krištof Rauber, a former bishop of Ljubljana.

The Castle also has a beautifully presented permanent Exhibition on Slovene History and visitors of all ages will enjoy a trip to the Museum of Puppetry housed above the Castle’s Estate Hall.

The castle also offer a range of tours such as guided viewings of the Castle and exhibitions by knowledgeable locals and the unique Time machine and Behind Bars immersive tours with actors assuming the roles of different characters throughout the history of the castle. Take a tour of your own pace at Ljubljana’s premier attraction at your own pace with commentary courtesy of an audio guide available in 14 languages. You can even save a dragon in a fun adventure game Escape Castle. Escape Castle runs every 30 minutes, last entry is two hours before the castle's closing time.

There are also small art galleries featuring temporary exhibitions as well as a café, restaurants and castle souvenir shop. It’s also a popular place for local weddings, and during the summer puts on concerts and, in July, hosts the popular Kinodvor's outdoor Film under the Stars Festival. To reach it, several small paths lead up from the Old Town, or take the funicular from next to the Puppet Theatre on Krekov trg. Click here for event tickets.


Ljubljana Castle is just one of many attractions that are on the bucket list of Free things to do in Ljubljana.

Want to know more about other similarily magnificent castles in Slovenia?

Open 10:00-18:00.
PLEASE NOTE: Due to C-19 the castle is only partially open and the funicular is not currently operating.

Tivoli Park
EDITOR'S PICK
/ljubljana/tivoli-park_37974v
Tivoli Park Ljubljana: A Centre of Recreation Tivoli Park is where the people of Ljubljana who don’t leave the city spend the weekend. Laid out in 1813 as a place for the general health and recreation of the city’s population, at some five squar
see more
Editor's pick

Grajska Planota 1, LJubljanski grad
featured
/ljubljana/friderik-the-castle-rat-souvenir-shop_136563v
With Ljubljana’s spectacular castle proudly overlooking the city there’s surely no better place to purchase souvenirs and keepsakes than from its very own gift shop. ‘Friderik’ is named after the castle’s oldest resident, Friderik the rat, who was one of
see more
Featured

Ljubljana Castle
featured
/ljubljana/grajska-kavarna_38370v
Swanky, cool and chic in equal measures. The café brings together the perfect blend of old meets new throughout its interior. As part of the Kaval Group one would expect nothing less, and its recent upgrade has certainly brought it up to scratch. The mod
see more
Featured

Grajska Planota 1
featured
/ljubljana/jazz-club-ljubljana-castle_151805v
One of the city's coolest nightlife venues and performance spaces is once again open to the public. If you've never been to an event held in the subterranean hall beneath Ljubljana Castle, you're in for a real treat – with craggy, natural rock formati
see more
Featured

Grajska Planota 1
featured
/ljubljana/strelec-castle-wine-bar-shop_163495v
Ljubljana Castle is the most visited place in the city and now there’s a new reason to head up the hill. The Strelec Wine Bar and Shop is a wine lover’s dream. Located on the upper level this stylish venue stocks wines exclusively from the three Slovenia
see more
Featured

Grajska Planota 1
featured
/ljubljana/strelec_113408v
Perched high up in the archer's tower, this award-winning restaurant at Ljubljana Castle overlooks the city from a grand position. A combination of the Roman Emona, Medieval and modern in terms of both cuisine and ambiance, the menu was created with t
see more
Featured

Grajska Planota 1
featured
/ljubljana/time-machine-at-ljubljana-castle_129119v
PLEASE NOTE: DUE TO C-19 THE TIME MACHINE TOUR IS NOT CURRENTLY RUNNING. CLICK HERE FOR MORE INFORMATION. Whilst it may be an often-claimed slogan, the Time Machine guided tour at Ljublj
see more
Featured

Behind Bars at Ljubljana Castle

Ljubljana Castle
/ljubljana/behind-bars-at-ljubljana-castle_149440v
PLEASE NOTE: DUE TO C-19 THE TIME MACHINE TOUR IS NOT CURRENTLY RUNNING. CLICK HERE FOR MORE INFORMATION. These days everyone can enjoy the Ljubljana Castle though hundreds of years ago
see more

Grajska Planota 1, Ljubljana Castle
/ljubljana/castle-experiences_153396v
While Ljubljana's famous castle is a must-see attraction in its own right, nowadays it also offers a numerous experiences in which visitors can participate, making it a full-day destination for those interested in taking advantage of all there is to s
see more

Krekov Trg
/ljubljana/castle-funicular_40049v
DUE TO C-19 THE FUNICULAR IS NOT CURRENTLY OPERATING. Spare yourself the slog up the hill by taking the train up to the castle.
see more

Grajska Planota 1, Ljubljana Castle
/ljubljana/castle-viewing-tower_153886v
No visit to Ljubljana Castle is complete without a journey to the top of the viewing tower. Standing exactly 400 metres above sea level, it offers panoramic views of the entire city, stretching all the way from the rolling hills of Dolenjska to the so
see more

Grajska Planota 1, Ljubljana Castle
/ljubljana/escape-castle_153395v
Escape rooms have become increasingly popular over the last few years, newest on the block for Ljubljana is Escape Castle which, as you may have guessed, takes place within the castle walls. You have one hour to follow the game map and rescue the drag
see more

Grajska Planota 1
/ljubljana/gostilna-na-gradu_68139v
DUE TO C-19 THE RESTAURANT IS TEMPORARILY CLOSED. Decidedly upmarket in appearance and service, the prices are surprisingly modest - especially given the truly unique location and dining experience that goes along with it. Na Gradu's award-winning
see more

Ljubljana Castle, Grajska Planota 1
/ljubljana/museum-of-puppetry_149439v
Slovenia has a rich history of puppetry dating back to the 1920s and beyond when the grandfather of Slovene Puppetry Milan Klemenčič opened his Tiny String Puppet Theatre. Almost 100 years later the Ljubljana Puppet Theatre is still going strong and c
see more

Grajska Planota 1, Ljubljana Castle
/ljubljana/virtual-castle_153887v
Located under Lookout Tower, the Virtual Castle is a 12-minute video presentation that takes visitors on an historical tour of both the castle and its grounds, beginning all the way in prehistoric times, covering the most important historical periods and
see more