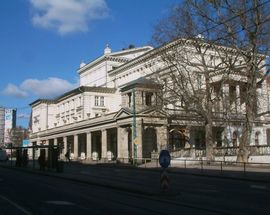 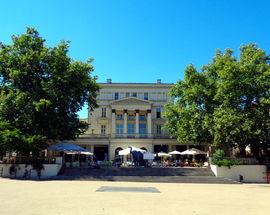 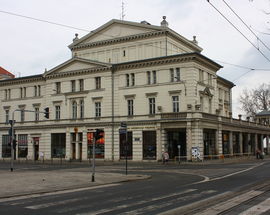 This freestanding neoclassicist building on Plac Wolności was - in its first incarnation - Poznań’s first municipal theatre. Designed by David Gilly and built between 1802 and 1804, shortly after Plac Wolności was first demarcated, it was a bit of a dud from the very beginning: lacking architectural finesse and central heating, it proved unpopular with theatre-goers. This was a stroke of luck for the city’s Polish actors, who couldn’t easily stage performances in Prussian-occupied Posen; the half-abandoned playhouse was rented out to them for a number of Polish-language shows. The last Polish performance took place in 1874, whereafter the action moved to the newly opened Polish Theatre. The same year, the disgraced building was shut down completely due to its poor technical condition, and three years later it was completely razed - the Prussians decided it’d be best to start over. Between 1878 and 1879 a new theatre was whipped up, but proved to be unlucky yet again: it was too cramped and had to be enlarged several years later. Once functioning, it continued to host German performances until 1910, when the more snazzy Great Theatre opened its doors. More renovation works took place in 1911, giving the theatre its present-day form, but not its present-day function: throughout the roaring twenties and much of the turbulent thirties, the building was a popular cafe frequented by the city’s upper classes. Originally called Cafe Esplanade, the establishment was renamed Cafe Hohenzollern by the Prussian authorities, who didn’t want pesky French propaganda. Financial problems caused the cafe to shut down in 1937, but just a year later another one opened in its place: the name, Arkadia, far outlasted the cafe itself. Around the same time, the Poznań Radio opened a studio in the building’s unoccupied space, where it would remain until the outbreak of WWII. After the war, the former theatre housed a variety of commercial and gastronomic establishments, including a casino. Currently, Arkadia is home to a tourist information centre, and Empik bookstore, and the Eighth Day Theatre.