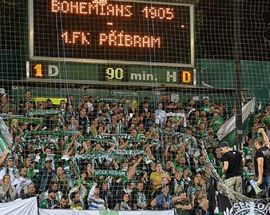 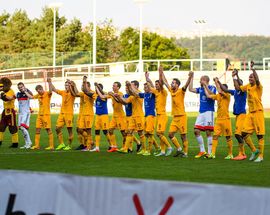 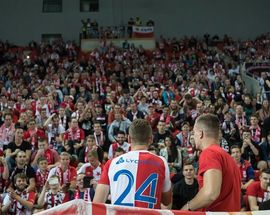 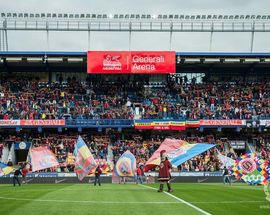 It may have been surpassed by ice hockey as the nation’s favourite sport, but football and the Czech Republic have a whole lot of history, going all the way back to a 1-1 draw with Hungary in 1906. The team was called Bohemia then, but with independence came footballing independence and a whole lot of glory. Czechoslovakia were losing World Cup finalists in 1934 and 1962, going one better and winning the European Championships in 1976. Being the capital and biggest city Prague had a whole lot of input in these successes, and the city predictably dominated the Czechoslovak First League.

47 out of 67 Czechoslovak championships were won by clubs from Prague, with Sparta leading the way with a remarkable 21 titles. When the Velvet Divorce came in 1993 Prague clubs continued their stranglehold on Czech championships, with nine of the first 10 being won by capital clubs. The football riches have begun to spread throughout the country with titles being won by clubs in Liberec, Plzen and Ostrava, but Prague still acts as the traditional centre of power in Czech football.

Whilst there are a whole host of clubs in Prague itself (14 at last count), only five of these have consistently performed in the upper reaches of Czech football since the demise of Czechoslovakia. If you’re looking to take in a bit of football culture whilst in the city we wholeheartedly recommend checking out one of these five, unless you’re more of a Sunday shirts and skins type. Sparta and Slavia are the two true powerhouses, Bohemians 1905 the scrappy underdog, Viktoria Žižkov the resigned elder statesman and Dukla the former leader experiencing something of a renaissance. Confused? Let us explain in a little more detail.

Chances are if the casual European football fan knows one side from the Czech Republic, it’ll be Sparta Prague. With 21 Czechoslovak championships and eight of the first 10 Czech titles safely in its trophy cabinet, Sparta are the Prague club with the biggest continental reach by some way. It helps that well-known modern names such as Tomáš Rosicky, Petr Čech, Karel Poborský and Patrik Berger (among others) all became stars here.

Sparta itself came into being way back in 1893, when a group of young lads decided the time was right to set up a sports club. The club are now famous for wearing redcurrant shirts, and for that we have English club Arsenal FC to thank. Sparta actually wore black up until 1906, at which point then-club president Dr. Petřik saw the Gunners play on a tour of the United Kingdom. If it worked for Arsenal it could work for Sparta, and from that point on variants of red and white were the colours of the club.

The side in redcurrant simply dominated Czechoslovak football, winning the Czechoslovak league a whopping 21 times (including eight championships out of the last 10). This domination continued in the Czech league, where Iron Sparta won seven of the first eight titles. Sparta are that club, the one that is always there or thereabouts at the top of the league. They play their home games at the Generali Stadium (known informally as Stadion Letna). The Sparta women’s team has been even more dominant in recent times - it won every league title between 2005 and 2013 for example.

It might not be the most popular descriptor possible, but one can be forgiven for viewing Slavia Prague as the Manchester City to Sparta’s Manchester United. Older than Sparta by one year, Slavia have largely been in the shadow of their biggest rivals throughout their history, their impressive achievements somewhat dwarfed by those of Sparta. This may change however, as in 2015 Slavia were bought by CEFC China Energy Company.

Founded in 1892 by medicine students in Vinohrady, Slavia was initially a cycling-focused sports club looking to increase sporting activity amongst the students. Football really kicked off in 1896, and on March 29th of that year the very first Slavia/Sparta derby was held. The match ended 0-0, and suffice to say there aren’t a whole lot of glowing reports of the battle.

Everything changed for Slavia in 1905, with the arrival of a Scottish man by the name of John Madden. A former Celtic player, Madden brought new tactics, new ideas and a new footballing culture to the club, and the results were impressive to say the least. Madden won 134 out of his 169 games, establishing an early golden age for the club known as Věčná Slavia (The Eternal Slavia). In fact, Slavia were far and away the strongest club in the country up until the climax of World War Two.

Slavia would win the first post-war Czechoslovak League in 1946/47, but they wouldn’t taste championship success again until 49 years later in 1996. They would have to wait another decade before winning the title again, and they celebrated their move to the Eden Arena in 2008 with another title. The Red and Whites also have a successful women’s team, who regularly compete with Sparta for the championship.

Every nation has its slightly wacky neutral’s favourites, and Bohemians 1905 are certainly that in the Czech Republic. The green and whites came into being in 1905 (obviously) as AFK Vršovice, and their mascot isn’t a kangaroo without reason. In 1927 Australia chose the club to represent all of Bohemia, giving them two live kangaroos as a gift in the process. As a result of the Aussies choice the club changed their name to Bohemians, dropped the kangaroos off at the zoo and plonked the marsupial on their badge for all eternity.

Bohemians 1905’s golden era was the early 1980s, when the club did the unthinkable and somehow managed to win the 1982/83 Czechoslovakian League, as well as reaching the semi-finals of the UEFA Cup. It was a remarkable achievement, but 20 years after this success it seemed as though the club would be no more as it stared financial oblivion in the face. The club was eventually saved by the fans, who paid off a considerable portion of the sizeable debt.

For a short while there were actually two Bohemians Prague clubs in the top flight. The traditional club used to be associated with the TJ Bohemians Praha franchise, who took advantage of the Kangaroos’ financial issues in 2005 to rent the logo out to lowly FC Střižkov Praha 9, who subsequently rose to the top division on the back of TJ’s finances. It wouldn’t last however, and much like the Highlander films there can be only one Bohemians.

Bohemians’ fans are unique to say the least, one of the few ideologically left-wing supporters’ groups in football. The Vršovice derby with Slavia Prague is the second biggest game in Czech football, with Slavia’s ground standing just 1km from Bohemians’.

A bit of a confusing one this, unless you happen to be a fan of either AFC Wimbledon or MK Dons. Playing their home games in the monolithic Juliska Stadium, a cursory glance at the winner’s table will show that Dukla Prague were 11-times champions of Czechoslovakia, as well as eight-times winners of the Czechoslovak Cup. Not only that, but the club were also the subject of a song by UK rockers Half Man Half Biscuit on their 1987 album ‘Back Again in the DHSS’.

This only tells half (well, less than that) of the story. The ideological Dukla came into being in 1948 and would win their first title in 1953. The club were backed by the army, which meant they had the pick of the talent across Czechoslovakia. This didn’t exactly make them the most popular club in the country, but it did make them one of the most successful.

When communism died, Dukla began to die too. They finished bottom of the first ever Czech League (by some way), and in 1996 Dukla merged with second division club FC Portál Přibram, a club based some 40km away from Prague. A number of name changes followed with the club eventually settling on their current name, 1.FK Přibram.

So if Přibram are Dukla, who are Dukla? Well, Dukla are Dukla, obviously. Maybe not the legal successor to the historic club, but they are the modern day version nonetheless. Dukla came from local amateur side Dukla Dejvice, finding themselves in the second division in 2007 before finally winning promotion back to the top tier in 2011. They wear the traditional red and gold, play in the monolithic Juliska and represent the modern day continuation of the Dukla Prague legacy.

Based in trendy yet gritty Žižkov, FK Viktoria are one of the founders of Czech football. By the time World War Two ended they were the third most successful club in Czechoslovakia, winning the championship in 1927/28, but they fell by the wayside somewhat during Czechoslovakia’s communist period and only found themselves promoted back to the top tier of Czech football in 1993 when all the Slovak teams walked away from the system.

FK Viktoria went through the usual mass of name changes during the 1950s with little success, before reverting back to the classic in 1965. Žižkov have experienced much more success in the cups, winning that particular trophy seven times between 1913 and 1940, before doing so again in 1994 and 2007.

In recent times Žižkov have become something of a yo-yo club, although the 2001/02 season did see them come within a few minutes of a miraculous league title, finishing just a point behind winners Slovan Liberec. Corruption scandals and financial peril followed however, leaving the Viktoria faithful dreaming of these better days.

British fans may know the club best from European adventures against Chelsea and Glasgow Rangers, although fans of the latter may well want to forget their away goals defeat in the UEFA Cup in 2004. The club were the subject of popular 1931 Czech film ‘Muži v offsidu’ (Men Offside) and once featured the so-called ‘King of Comedians’ (Vlasta Burian) in between the sticks.
Football

Vršovická 31
featured
/prague/bohemians-1905_30506v
Every nation has its unorthodox club, and Bohemians 1905 are certainly that in the Czech Republic. The green and whites came into being in 1905 (obviously), …
see more
Featured
Football

Generali Arena, Milady Horákové 98
/prague/ac-sparta-praha_30505v
Far and away the most successful club in the history of Czech football, Sparta came into being as a sports club way back in December 1893 when three friends …
see more
Football

Na Julisce 28
/prague/fk-dukla-prague_147675v
The may not be the legal successors to the successful club of the communist era (1.FK Přibram hold those deeds), but FK Dukla Prague are certainly the …
see more
Football

Stadion Viktorie, Seifertova 2871/10
/prague/fk-viktoria-zizkov_30507v
Champions in 1927/28, Viktoria Žižkov fell by the wayside somewhat during Czechoslovakia’s communist period and only found themselves promoted back to the top …
see more
Football

Eden Arena, U Slavie 1540/2a
/prague/sk-slavia-praha_1880v
Founded way back in 1892 by medicine students in Vinohrady as a way to get people to be more active, Slavia didn’t really kick off as a football club until …
see more