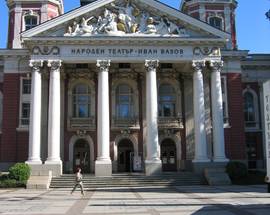 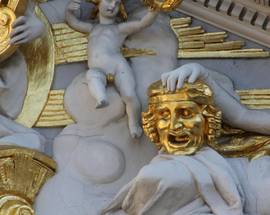 Built in 1907 by the Austrian architects Helmer & Felner, the National Theatre is one of the most ornate buildings in Sofia. The 40 metre high façade, is fronted by a large pediment, supported on six white marble columns, depicting Apollo and the muses. The twin towers that rise up behind are crowned with sculptures of the goddess Nike.The interior was destroyed by fire in 1923, and restored again six years later increasing the theatres seating capacity to over 1000. The ornate main hall has an 850 audience capacity. The stage curtain, with its mythical firebird motive from Stravinsky’s ballet, was woven by women from Panagyurishte.

Although you are unlikely to want to see a play unless your Bulgarian is excellent, you can still sit out front at one of the many cafes and soak up the atmosphere.
Show on map