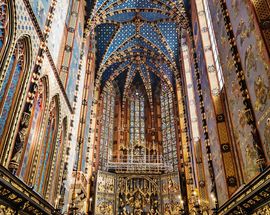 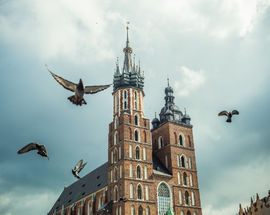 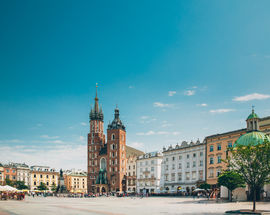 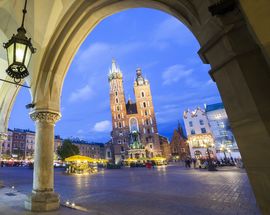 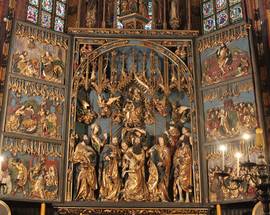 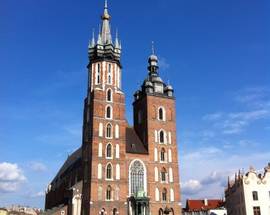 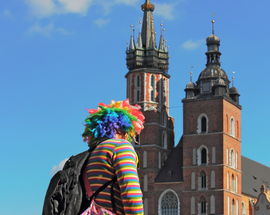 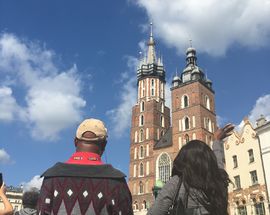 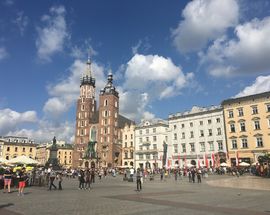 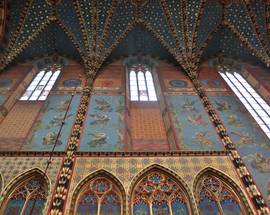 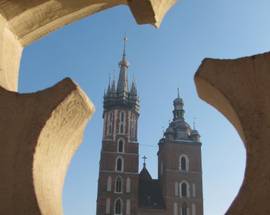 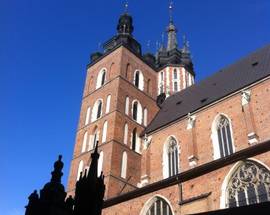 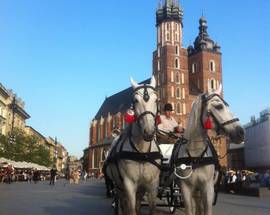 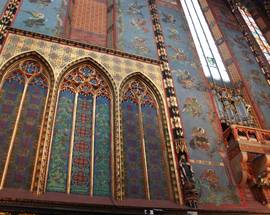 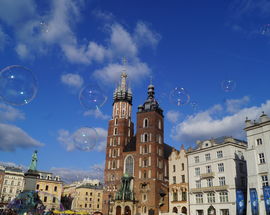 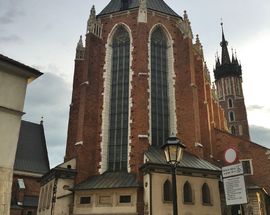 After Tartar raids in the 13th century left the original church in a heap of ruins, St. Mary’s was rebuilt in Gothic style on the existing foundations and consecrated in 1320. In the early 15th century the towers took the iconic form they have today, when the northern tower was raised to 80m high and made into a watchtower for the city. It is from here that the hejnał mariacki - the city's famous bugle call - is played every hour on the hour. One of the city's most enduring traditions, the tune ironically breaks off mid-melody in honour of the mythical trumpeter who was shot in the neck while belatedly warning the city of Mongol invaders; don't miss it.

No matter how many times you see them - the altarpiece, stained glass windows of the nave, and the blue, starred ceiling on St. Mary's will take your breath away. The magnificent wooden altarpiece was the principal work of 15th century German artist Veit Stoss (aka Wit Stwosz) for 12 painstaking years, and depicts the Virgin Mary’s Quietus among the apostles; note, however, that gradual conservation work on the altar is currently underway (projected to last until 2020), and not all elements may be on display during your visit. Surrounding the altar are polychrome paintings by Polish masters Matejko, Mehoffer and Wyspiański done in the late 19th century.

The church is typically available for worship without paying an entry fee via the main entrance. Tourists are asked to use a side entrance, however, and not visit during services; we list the tourist visiting hours below. Tickets are purchased in a separate building across from the tourist entrance. The two church towers are also open seasonally to tourists, but require separate tickets. The Bugle Tower is open from March to December (weather dependent, ticket required) to groups of 10 people max every 30mins from Tue-Sat 09:10-17:30, Sun 13:10-17:30; Nov, Dec, March open Tue-Sat 09:10-11:30, 13:10-17:30; admission 15/10zł, no kids under 7. [Note that these tickets cannot be bought in advance and sell out very early in the morning.] Bell Tower open by appointment only from April until end of October; admission 15zł, no kids.

22.01.2018
lady Melinda,
usa
iam looking for information about birth records of my great grand father an his son great Grand name was Lord Michael.Safian live there in 1800 marrided there Krakow an his loder son Lord Walter, Safian born,an birth was there in Krakow a was church menber of St Mary Basilica Church if anyone could give me more infornation about these people if they were Nobiel of poland is know Lithuanian stats ??not sure
04.08.2016
Phil C
Krakow
Amazing Basilica right in the main square, take a climb up the tower on the hour to get a real close up of the Hejnal. A Tip, if you enter via the front doors you avoid paying the entry fee.
11.05.2015
Lady melinda.waladyslaw&#34;safian
toledo,ohio usa
in quireing about family that live in krakow durning the earl too lmiddle of 1800? that familt attended there a batizls there childern there&#34;&#34; Went by Lord Michael,Waladylslaw&#34;Safain a several son oldest son my grandfather by Walter,Waladyslaw&#34;Safian batizle, commioun there too need information please of there birth records there
13.10.2007
Alfred Sciberras

I have been to Cracow last August and I was greatly fascinated with its beauty. Among the places of interested I have visited St. Mary's Basilica in the Main Square. Its beauty took my breath away and left me speechless. Just before I left this beautiful church I noticed that there are two pulpits, I wonder why as I have never seen a church with two pulpits and I have sisited several basilicas, cathedrals and other churches in different countries. Can anyoneone please let me know why?
14.07.2007
Sue Karolski

A beautiful, fabulous church full of wonderful carvings and pictures. Like all churches in Krakow it is filled with historical interest. Krakow is wonderful if you love fine buildings, restaurants and places to drink and socialise.
Take your guide with you Download a pdf