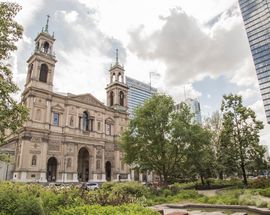 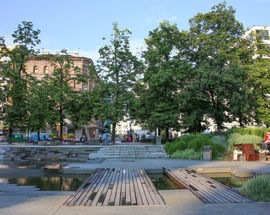 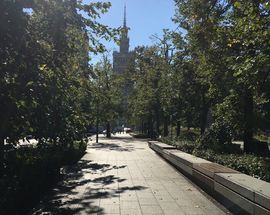 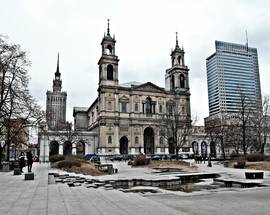 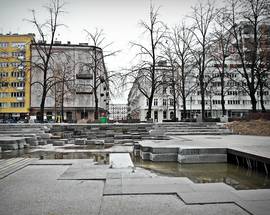 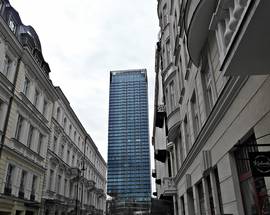 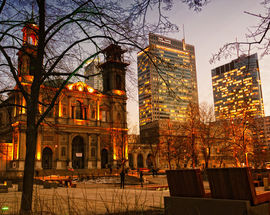 Plac Grzybowski (Gryzbowski Square/Plaza) is situated behind the crossing of ul. Świętokrzyska and ul. Marszałkowska and, as with the majority of the city, is an area with a fascinating and rich history. IYP unravels its somewhat complicated past and takes you on a guided tour of its promising present filled with bustling bistros, cool cafes and cultural hot spots.

The roots of this characteristically triangular square date back to the early 17th century when it was simply an undeveloped section of land which served the role of being a crossing point linking the Old Town, Ujazdów Castle and the outlying village of Słuzewiec (now a popular residential part of Warsaw). By the middle of the 17th century the area had become a popular, bustling market square and became known as Grzybów - named after Jan Grzybowski, the owner of the land. During this period, the land was granted Jurydyka status – a specifically Polish concept dating back to the 14th century whereby the Catholic Church or the nobility, as landowners, could set their own laws and regulations for land on the outskirts of, or in enclaves of Royal cities. One of the main benefits of this was the ability to bypass strict trading laws and licences, therefore allowing the flow of free trade. In this way, Grzybów became an important trade centre of the time.


As Warsaw continued to grow, Grzybów was integrated into the Warsaw area in 1791. Its local town hall was converted into a prison and served this purpose until 1830, after which it was demolished to make way for a vast grain market. As trade prospered, the beginning of the 19th century saw the building of imposing neo-classical style townhouses around the market square and its surrounding streets. Wealth appeared to be no object and some of the top architects of the time, including Antoni Corazzi - best known for the imposing Teatr Wielki (the Grand Theatre) on Pl. Teatralny - were employed to design buildings in the area. The square itself became officially known as Grzybowski Market in 1830. It’s actually slightly odd to call it a square as the former market space was actually in a triangular, almost arrowhead shape.

By the mid 19th century the area had become mainly inhabited by Warsaw Jews, the market thrived and small businesses, mainly involved in ironmongery, sprung up in the little shops around the open air market. Up until a few years ago, and the renovation of the grand buildings on ul. Próźna, the little ground level shops in the post-war, almost derelict and rundown buildings carried on the popular trades of that bygone era by selling things like 2000 types of metal washer or 10,000 different types of nails for every need etc. All of those ‘hark backs’ to a different era have sadly vanished, although on the opposite side of the square, in a strip of renovated facades some little oddities still remain; like the rope and string specialist with a nice sideline in felt, or the ironmongers shop with a fabulous selection of sandpaper and drill bits. Those last few specialist traders now find themselves, sandwiched between a trendy jewellery store, a designer spectacle emporium and a connoisseur wine shop.

In 1897 the market was closed for good and relocated to, the now long gone Witkowski Square. With the outbreak of World War II in 1939, the square and surrounding buildings suffered from heavy bombing, with some buildings having to be totally demolished in 1940. The worst was yet to come, as by the end of 1940, the area was integrated into the Warsaw Ghetto and became part of what was known as the 'Small Ghetto', with a wall separating the Jewish from the non-Jewish parts. After the liquidation of the 'Small Ghetto' – with the majority of Jewish residents transported from the Umschlagplatz to the extermination camp of Treblinka, the townhouses and other properties were handed over to Polish residents of the city.

Heavy fighting during the Warsaw Uprising of 1944 also saw significant damage to buildings, including the beautiful, Enrico Marconi designed, neoclassical styled All Saint's Church (Kościół Wszystkich Świętych). The church, the largest in Warsaw, was restored after the war (much to the irritation of the post-war Communist authorities, but that's another story!). After the crushing of the Uprising, the Germans destroyed the western side of Grzybowski and raised the nearby Aron Serdyner Synagogue (1861) to the ground, its former site at ul. Twarda 4 is now home to the luxurious, 44 storey Cosmopolitan apartment building designed by German architect Helmut Jahn.

Over the last few years, Plac Grzybowski and its surrounding streets have slowly but surely been undergoing comprehensive restoration and renovation projects. Ul. Próżna’s poignantly moving and semi-derelict original tenement houses have now been given the full renovation treatment with a slight film-set feel (it’s all beautifully done and hopefully it will all start to look and feel more “real" as the buildings age). Until 2013 this little street stood as a living memorial and testament to the past but, as with most of the city, the problem lies with the dilemma of leaving areas as reminders of Warsaw's depressingly sad WWII legacy and moving with the times. Próżna is a brilliant example of how this dilemma can be addressed in a sympathetic manner while evoking the atmosphere of the streets pre-war glamour. The short strip, where our beloved little specialist ironmongery shops once stood, is as yet unrestored, so spend a little time musing over the details of this section for an idea as to how the whole street looked up until only a few years ago.

The hardware stores of the derelict era may have gone, but the upgrade means that Próżna now attracts the culinary brigade and most of the eateries are varied and come highly recommended. They may cover the whole ‘wallet range’ spectrum but we don’t think any of them will disappoint; a weak contender simply wouldn't survive on this little gem of a street. It’s also worth popping into the Austrian Culture Forum at Próżna 7/9 to check out their events programme. The centre has been an important cultural organisation in Warsaw since the 1960's and organises regular concerts, readings, poetry events and exhibitions in the city.

The end of Próżna leads you onto the market square area of Pl. Grzybowski. Take note of the corner site tenement block, it's also still being renovated but up until a couple of years ago it was the site of one of our favourite, and simplest, "memorials” to the area’s past. The crumbling rust-red brickwork was adorned with large scale sepia prints of former Jewish residents of the tenements. The installation made for a truly moving sight as the melancholy faces looked down on their former home ground, particularly in the evenings when the facade was subtly lit up. Sadly, as with the real people, even their images were to be with us only for a short time.

Take a short stroll around the market square area which is now a nice paved and landscaped space with water features, boardwalk style walkways and seating. It’s a popular place for the locals to sit around chatting, relaxing and just taking a break from the ever increasing, number of jam packed trendy eateries around the square or the nearby bustle of the city centre.

On the foodie front, the last few years have seen some cracking new additions surrounding the square, in particular two places with a hip approach to modern eating. During our wander around, on a Saturday morning, all places were already packed to the gunnels with the type of trendy Varsovians and tourists that make it seem inevitable that Pl. Grzybowski may finally get a serious stab at being the next coolest point to visit in Warsaw.

Other places of interest once included the now demolished Ester Rachel & Ida Kamińska State Jewish Theatre at Pl. Grzybowski 12/16 (as of 2017, temporarily located on ul. Senatorska 35 but will eventually return to the revamped tenement on ul. Próżna 14). This famous theatre performs classics of Yiddish literature as well as contemporary works relating to Jewish topics. The Nożyk Synagogue (ul. Twarda 6) dates back to 1898 and is the only synagogue in Warsaw to have survived the war, mainly due to the fact that the Nazis used the building as stables and a store during the war years. The synagogue was restored after the war and continues to be a place for daily worship and is the main meeting place for Warsaw's Jewish community.

Without a doubt, one of the highlights in the Warsaw calendar is the yearly Singer’s Warsaw Festival. It takes place towards the end of August and the whole area around Pl. Grzybowski turns into eight days of festivities, performances, concerts, exhibitions, markets with spontaneous events and good natured camaraderie in the locales around the square. Since its inception in 2004 the festival gets bigger and more popular by the year, attracting visitors and performers from around the globe. So, start thinking ahead and book yourselves tickets to return to Warsaw later in the year!