In Your Pocket takes a tour of the Turopolje region in Croatia, where wooden architectural gems - churches, houses, town halls - stand waiting to be admired at seemingly every turn, and often in the most unexpected places.

What’s so special about this architecture?

Though the style changes depending on whether you’re in the North or South Carpathians, in Kyiv or Murmansk, the uniting factor is wood.

These are buildings that have survived despite the fact that they are built entirely out of timber; in some cases, not even allowing themselves the luxury of the odd nail or two. And we’re not talking sheds here.What mischievous sprite dwelt within those dark and brooding souls that compelled them to build these monuments out of wood?

Well… between the Black Forest and the eastern seaboard of Siberia there are quite a lot of trees. Since Cro-Magnon Man first knocked up a shelter, it has been common practice to build homes out of the material most easily available locally. (Unless you were a Roman Emperor or David Beckham or something).

Building stuff out of wood is hardly novel. Just ask a Mountie or a gardener in Wimbledon. But the wooden folk architecture of eastern Europe can be stunning. Ranging from charming little chapels to awe-inspiring multi-onion-domed edifices, from simple and colourful peasant dwellings to aristocratic residences, each one is unique. 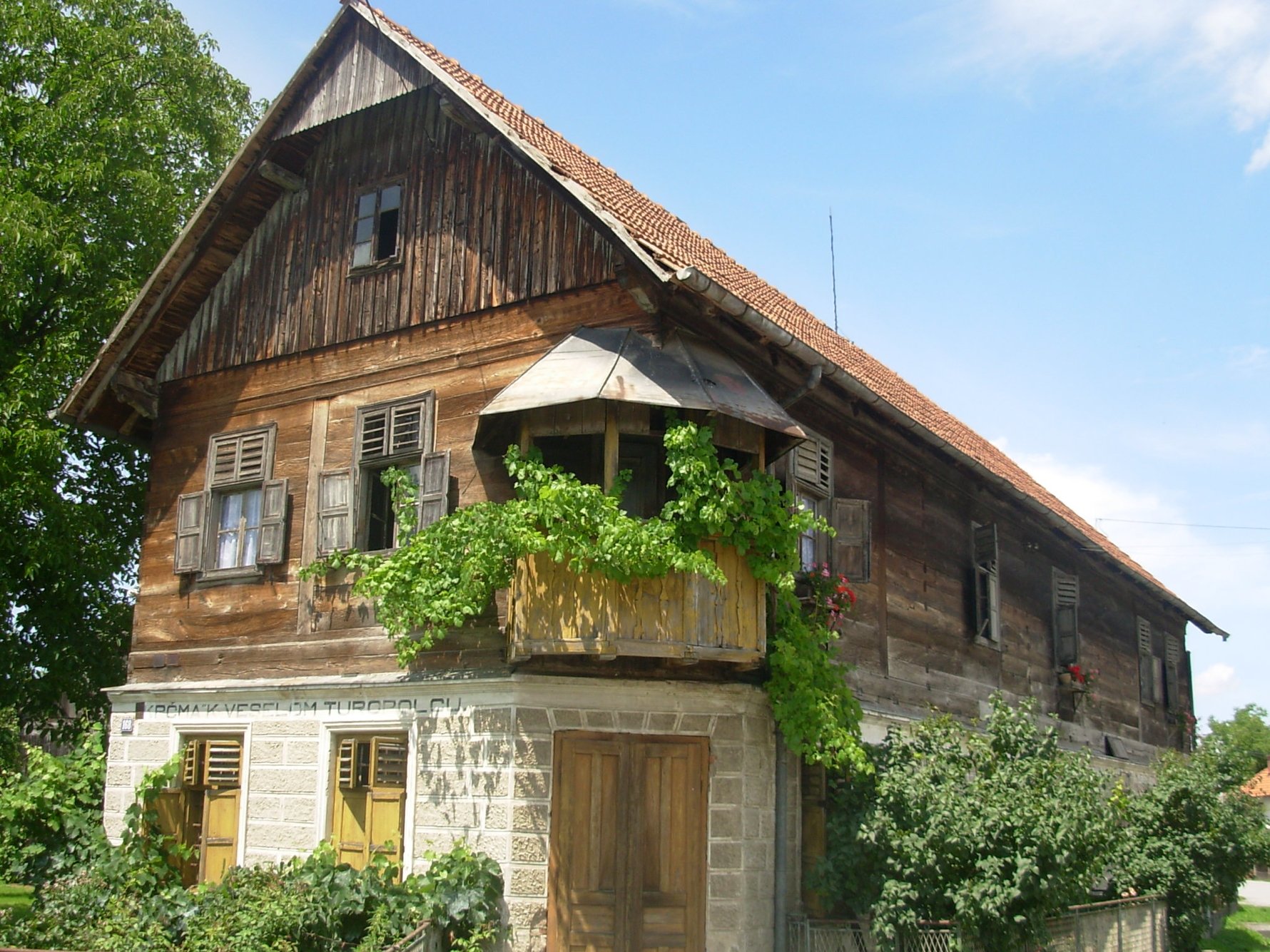 The good news is you don’t have to travel to Archangelsk to see this. It’s on your doorstep.
The first stop on our tour of the traditional wooden architecture of Turopolje region is at Velika Gorica.
Standing curiously isolated in the middle of a field by the village of Pleso, within sight of the air traffic control tower and some 1970s apartment blocks, is the minute wooden Chapel of the Wounded Jesus (Kapelica Ranjenog Isusa). This is still a working chapel, and mass can be heard there on Sunday mornings – quite a special experience.

The carving and painting on the portal is very attractive,well worth stopping to take a look. The reason we mention this chapel first is because of its location next to a Zagreb landmark. But there is an even more rewarding experience awaiting you in Velika Mlaka.

The Chapel of St Barbara there is known as the Turopoljska Ljepotica, or “Turopolje Beauty”. You can hardly believe you’re just a stone’s throw from the Zagreb city boundary. When we arrived, not only were we greeted by the sight of the delightful little chapel flanked by other wooden buildings and a rustic old farm, but a couple also trotted by in a pony and trap. It was morning, cocks were crowing, and suddenly we were in a different world.

Even though our party included folk born and bred in Zagreb, we were all surprised not only how different the atmosphere was in this corner of a dormitory of Zagreb, but also at how attractive the chapel was. Built from dark wood, its charm lies in the combination of simplicity and touches of decorative folk carving. The shape of the chapel is really unusual, with two steeples. It really is a nice break from the daily grind of city life to poke around the churchyard, trying to peek through the windows, surrounded by trees, morning sunshine and birdsong.

What you may not know about the nearby town of Velika Gorica is that it’s the administrative centre of a region called Turopolje, bordered in the north by the River Sava, and to the south and east by the upland region of Vukomeričke gorice and the River Kupa. Turopolje’s water table is rich, and provides an ideal habitat for oak trees. The quality of Turopolje oak is renowned, and so has become intertwined with the heritage of daily life there. Turopolje is also famous for its “peasant nobles”, a politically privileged community represented for generations in the Croatian Sabor (Parliament). The Turopolje nobles tended to be rather conservative and, you may be interested to know, physically fought with the supporters of Ljudevit Gaj’s National Party at county elections in 1845, who called for Slavs to unite and demand greater freedom for the from the Hungarian rulers at the time. Turopolje is still scattered with relics from the heyday of these families. The wooden chapels have been supported for generations by them, and they also built characteristic wooden mansions, called kurija. Some of these still survive today.

From Velika Mlaka, cross the highway, and you’re in the village of Donja Lomnica. Here is the best-preserved of the kurija, Modić-Bedeković. Having been much impressed by what we had seen at Pleso and Velika Mlaka, we were wondering why Turopolje wooden architecture is not much more well known. We were looking forward to seeing the Modić-Bedeković house, since it sounded so special in the little information we had managed to find about it.

Donja Lomnica is a quiet little village with an attractive church, but the first two people we asked had never heard about the kurija. And when we finally found it, it was not quite as we had imagined. A large-ish house stands in a patch of once fine but now unremarkable garden, surrounded by a chicken wire fence. A neighbour (who turned out to be the house’s caretaker) was happy to show us around. Apparently, the owners don’t live there, using the place only from time to time in the summer. While they are away, the upper storeys are kept locked - a pity, since apparently they are quite grand.

But to peep inside the ground floor is a lovely experience. One could imagine estate agents convulsing over “character” and “potential” – there are thick oak beams and stone floors. In the entrance room, a simple four-wheeled carriage gathers dust in the corner, sharing space with our host’s dinner table and a washing line. Just to the left, huge oak barrels are room-mates with an automatic washing machine. In a room to the right, an original brick stove serves as a podium for a pair of Adidas trainers.

Don’t imagine that it isn’t interesting to take a look. But just don’t expect to find cases full of exhibits in museum condition. Due to lack of funds or lack of will (who knows), there is so much that is so worthwhile to see, of which so little is made at the moment in inland Croatia. The time will come when tourism away from the coast is developed to its full potential, and the crowds will come. But for now, hidden corners and a more personal experience awaits you if you take the time to look. There is beauty in the details. The only problem is that these treasures are in danger of being lost forever.

We went in search of more kurija. Beyond Velika Gorica, in the village of Staro Čiče, is a house which once was Turopolje’s County Hall. Now, it’s a rather idyllic, if careworn, family home. We knocked on the door: a woman holding a baby confirmed it was OK to take photos. All the neighbouring dogs barked at us including the 101 Red Setters living across the road.

Then it was on to neighbouring Vukovina to see the Alapić family kurija. This is indeed a curiosity.
A long, low building with a deep roof, the house is in a desperate state of disrepair, allowing you to see clearly rush wattles and wooden boards (and sometimes brickwork) beneath, as the façade crumbles away. The dilapidated look is offset by the fact that one of the co-owners, Mladen Mikulin, a well-known local sculptor, has turned the garden into a sculpture park. A peek through a window (with a neighbour’s blessing) revealed a room full of body parts of plaster statues in various states of construction. Great studio! Mr Mikulin wants to investing in renovation, we hear, but his hands are tied by ownership issues and it seems impossible to rescue the building from collapse at the moment.

Moving on, just a short drive south in Buševec, is maybe the corner with the most atmosphere. Set back just a little from the road, on the right as you’re driving into the village, is the tiny chapel of the Holy Apostle: a dark wood chapel with a tower shaped like a mushroom, surrounded by a tiny churchyard shaded by yew. The chapel is not in the best state of repair, but the mossy shade and the quiet give a most pleasing air.

Across country towards the village of Cvetković Brdo, you approach the hills of Vukomeričke gorice, a summer idyll for those with weekend cottages. We come to the chapel of St Rocco, just outside the centre of the village. The view makes you want to gulp lungfuls of clean air and start singing “The Sound of Music”. The chapel is a chubby little affair, with a (typical Turopolje style) steeple and porch hanging over the front, threatening to capsize the church over onto its chin. In contrast to the last few places, the chapel has been freshly renovated. It looks quite different; the façade being wooden shingles rather than boards as we have seen up to now.

Last stop on our tour was the chapel of St Anthony of Padova. Different again: this one a delicate, spindly character, in two-tone light and dark wood with a lot of decoration, that somehow reminds one of the Wild West. Two bell ropes hang in front, presumably to ring to warn of approaching Injuns. We gave one a tinkle – nobody seemed to mind.

We didn’t have time to call in the chapel of St Katharine in Dubranec, or to go south to Lukinić Brdo or Lijevi Štefanki, where there are also wooden chapels. Even further south are more examples of wooden architecture, in the region Pokupsko. But, driving back, we did have time to see the Lukavec fortress, which you will pass on the way back to the highway. It’s surrounded by a swamp, like a shallow moat, which sadly isn’t crocodile-infested.

You’ll have noticed that we didn’t manage to get inside any of these places, as we went when the churches were closed, and the kurija are not so easy to get into.

If you do manage to look inside, you will be rewarded by baroque statues, folk carving, period furniture and art.

Another way to get a good idea of what lies inside is to visit the Turopolje Museum in the centre of Velika Gorica. Itself an eighteenth century Baroque building, and it contains an exhibition of household goods and textiles giving you a little more idea of the colour of daily life in this region in times gone by.