Steaks, steaks, nothing but steaks.
share post a comment
Despite the trend towards vegetarian and vegan food, Zurich has experienced a real renaissance in terms of steakhouses and meat restaurants over the last couple of years. And while meat in general as well as steaks, t-bones and the like have always been a favourite of Zurich's residents when dining out, there have been many additions and openings just recently. Today you can find anything from Argentinian steakhouses and establishments specialising in French-style entrecôtes (with secret sauces) to small delicatessens with more of a head-to-tail approach. We found that the meat quality in Zurich is consistently high, but we have nevertheless put together a list of the best steak and meat restaurants that we've encountered in Zurich. Just skim through the reviews and pick the one that most matches your expectations of a steakhouse or a restaurant specialising in meat, be it a place where you can choose your own piece of meat at a butcher-style counter, a grill restaurant with a charcoal oven or a small romantic establishment.

Goodwin is a classy steakhouse located in the Alden hotel. It offers all the traditional beef cuts from porterhouses to T-bones, the meat usually originating in Australia or the US. We ordered the rib-eye and received a juicy piece of meat cooked to a
perfect medium rare and the charcoal oven definitely added some extra flavour. Read more here 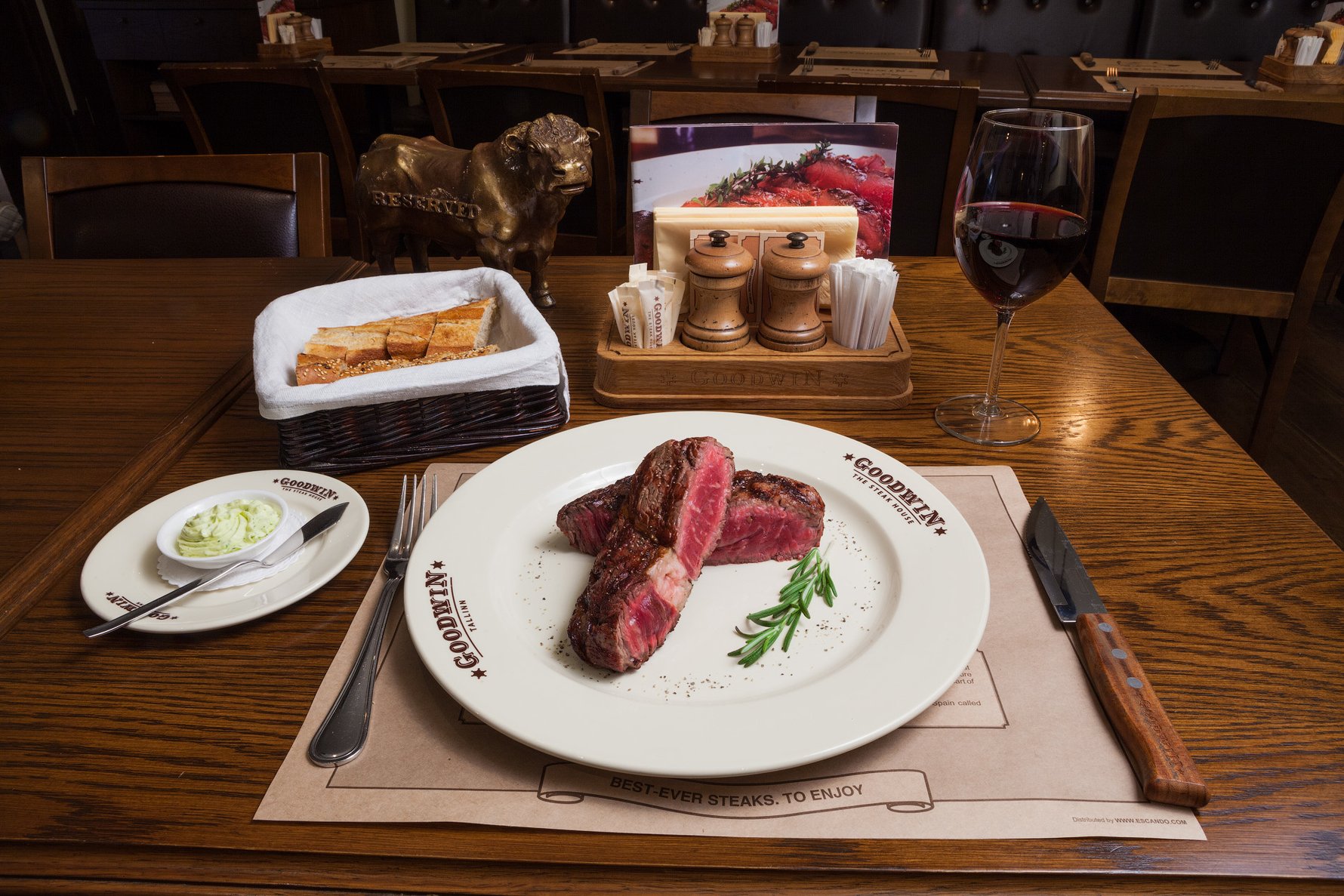 The simple yet refined concept of Le Relais de l’ Entrecôte was invented in 1959 in Paris, but only reached Zurich’s old town in the spring of 2019. They only serve one dish: entrecôte with its famed secret butter sauce, small cut French fries (pommes allumettes) and a green salad with walnuts as a starter. So all you have to do is choose how you’d like your steak cooked (authentic French style is bleu or rare). Read more here. 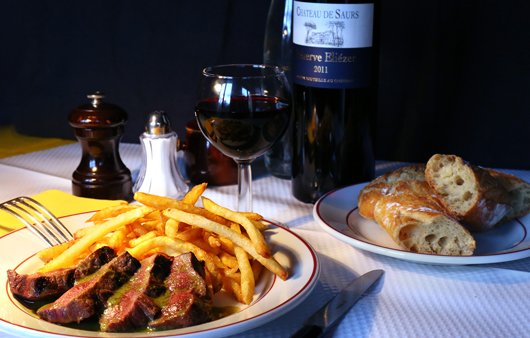 At the Butchers Table you choose your meat at the display counter, but don't be afraid to ask for a private consultation from the butcher himself. He convinced us to pick the so-called 'second cuts' of beef, which are essentially less common pieces (at least around here), instead of the more popular tenderloins and fillets. Don't miss out on a bone shot, where the waiter pours some vodka through a bone directly into your mouth. Read more here. 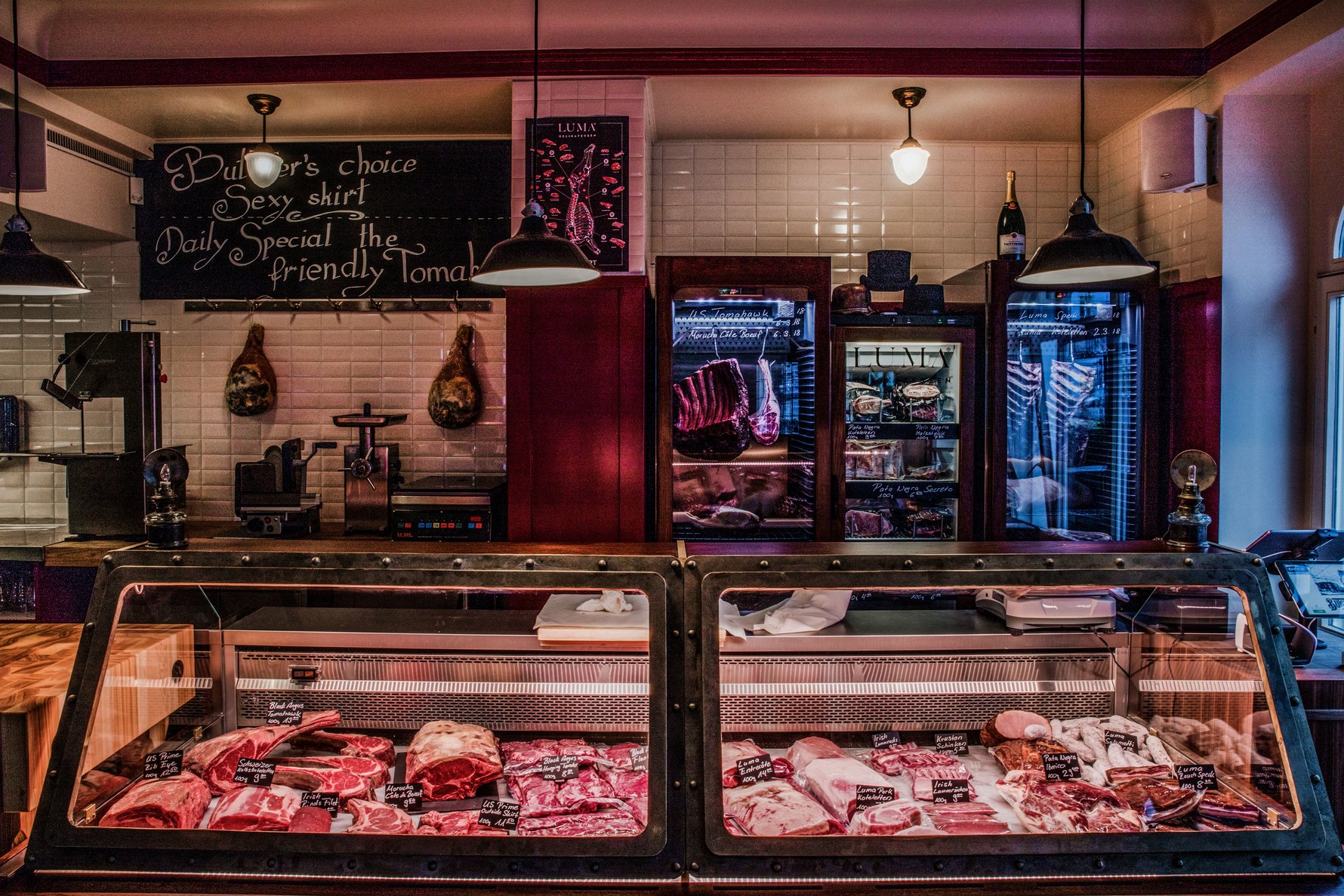 This small, pleasant restaurant specialises in Argentinian beef that comes straight from the charcoal grill and our entrecôte was tender and bursting with flavour. The chimchurri sauce that accompanied it was authentic with loads of freshly chopped parsley. They import the beef themselves, by the way, which probably explains the outstanding quality. Read more here. 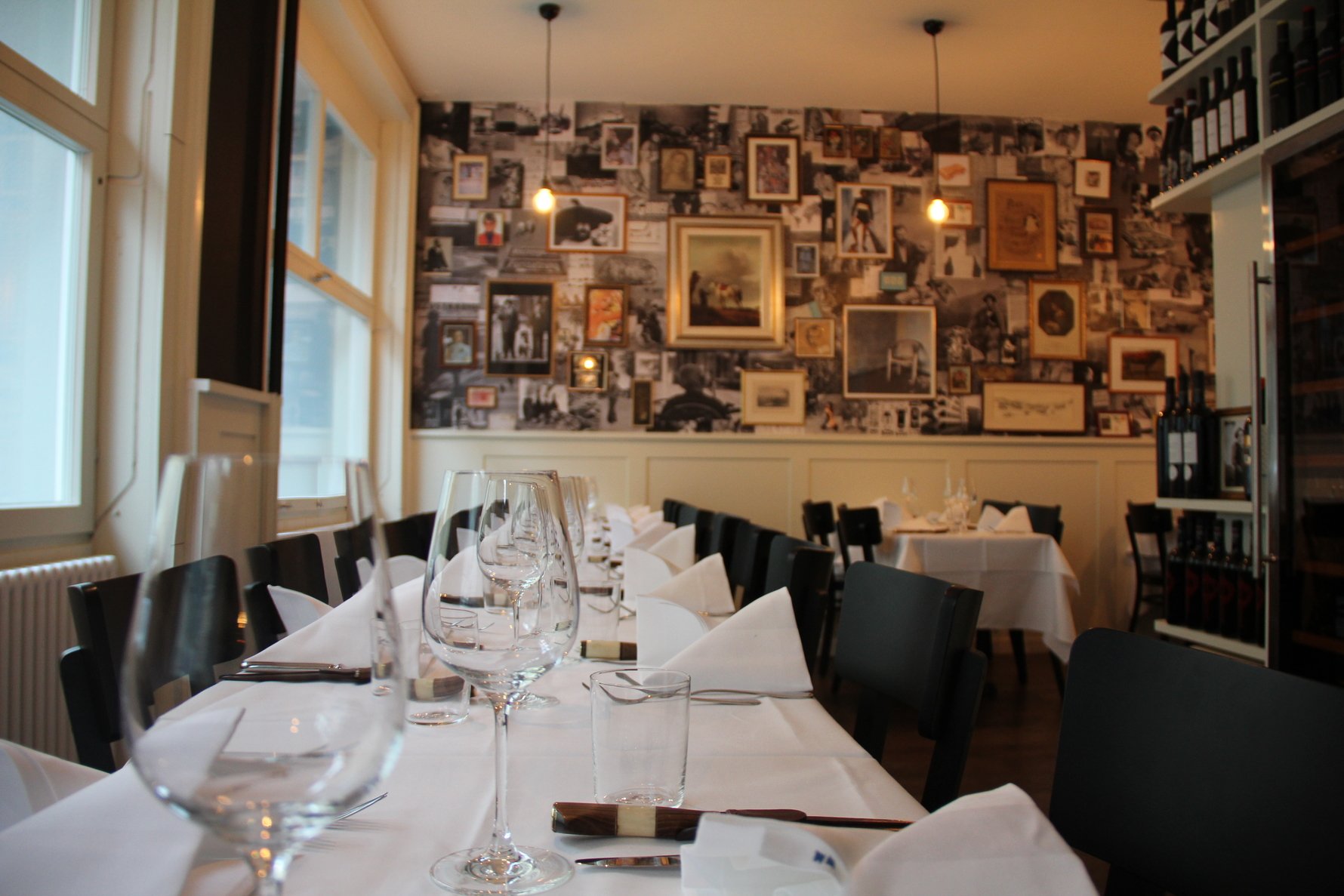 Metzg is a butcher shop and a restaurant in one. It specialises in local meat, be it beef, pork, lamb or local game. After perusing the small, yet ever-changing menu, we chose the pork heart with fennel to start, which was excellent. But what really sold us on this place was the Angus beef steak, which was tender and perfectly grilled - a real treat. Read more here. 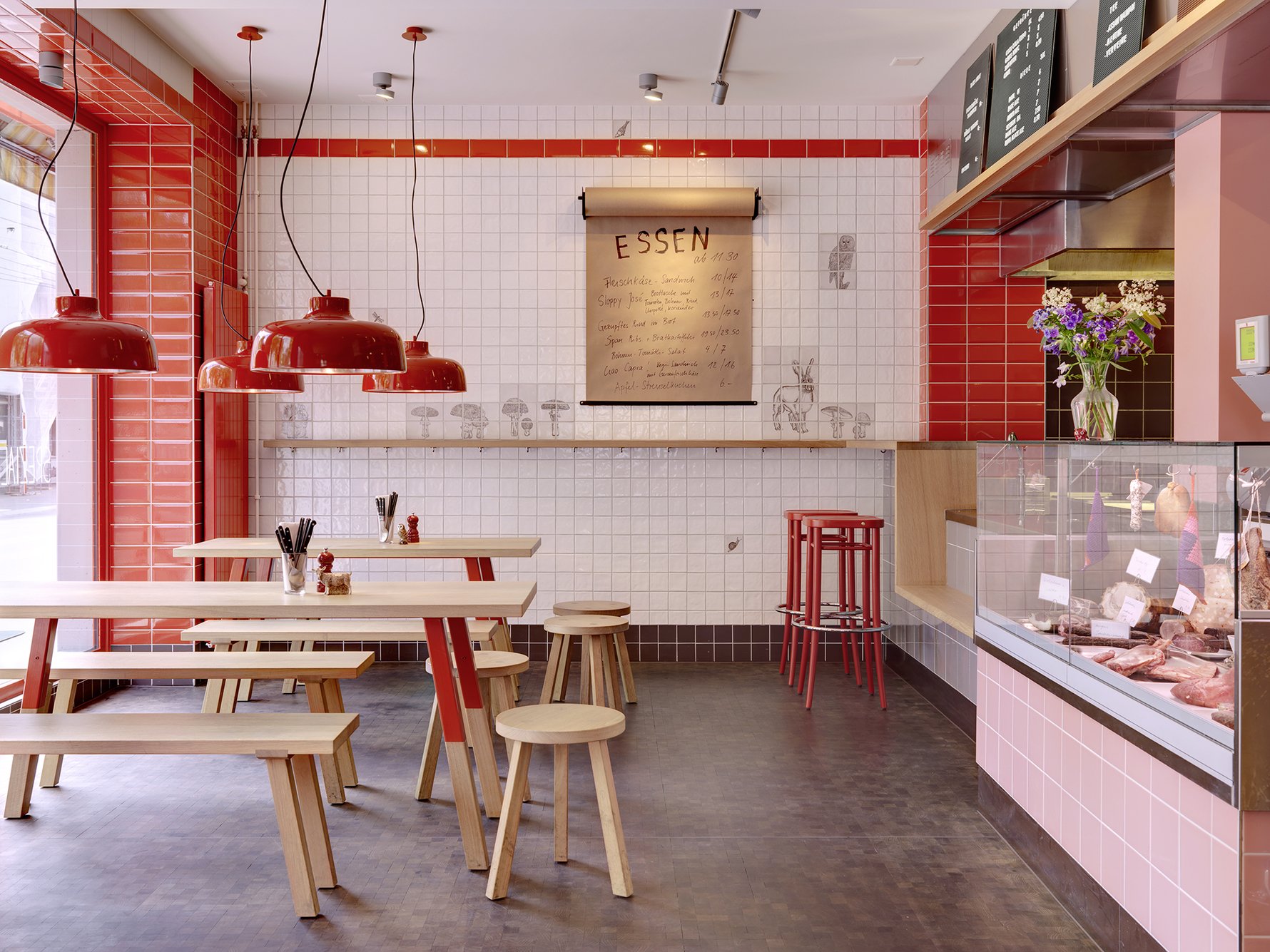 This is a joint project by Smith & Smith wine purveyors and De Luma meat producers. Our aged beef was outstanding, both the entrecôte and the fillet, and not only was the meat tender, but the flavour created by the mould culture they add to the entrecôte during the ageing process is simply remarkable. Naturally, given its owners, the wine recommendation, a Chianti from Tuscany, by our friendly waitress was a real treat. Read more here. 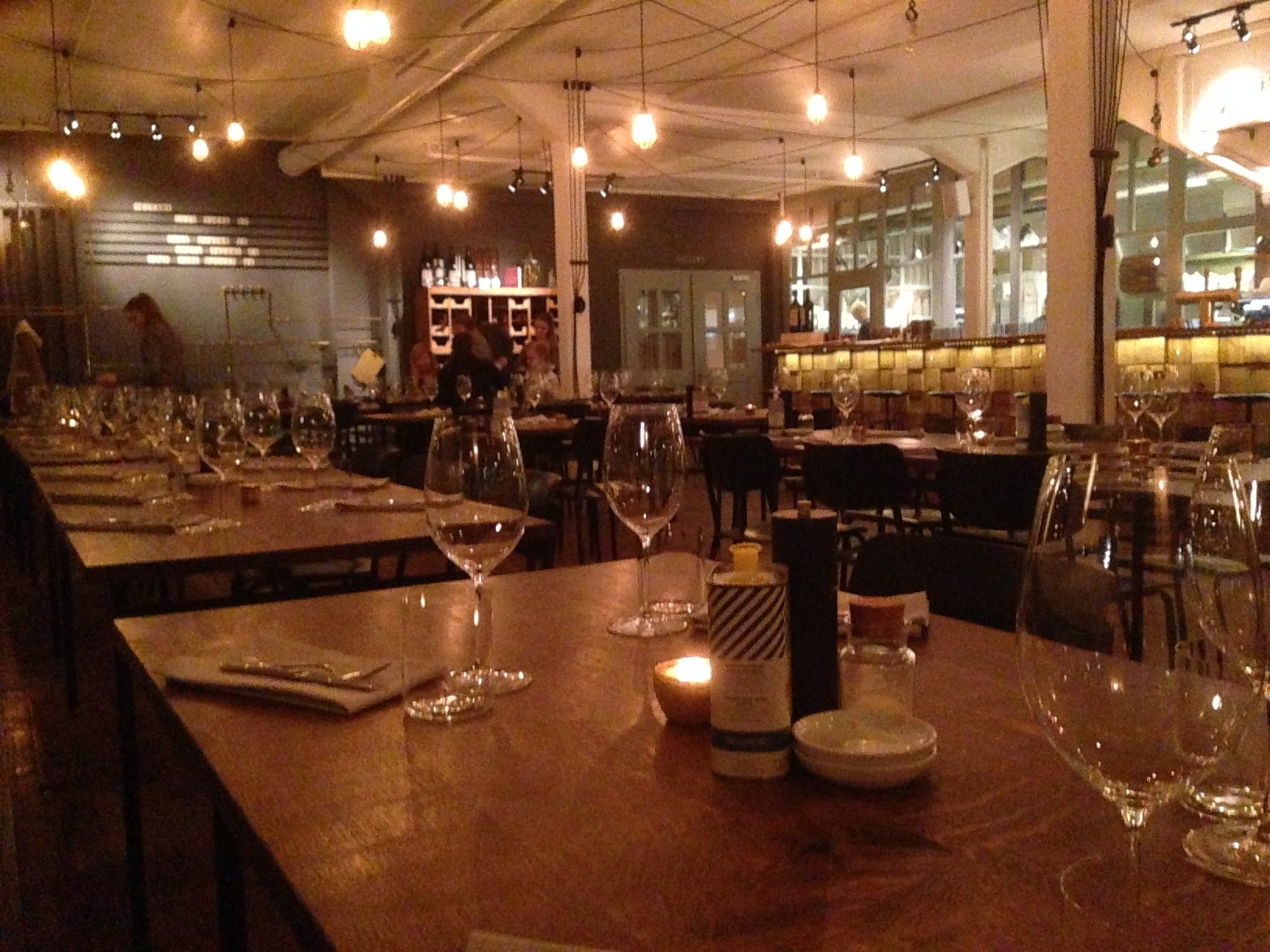 The best steakhouses in Zurich

Splügenstrasse 2
featured
/zurich/goodwin-the-steak-house_158703v
Goodwin is a classy steakhouse located in the Alden hotel, close to the lake. It offers all the traditional beef cuts from porterhouses to T-bones, the meat …
see more
Featured
French

Nietengasse 18
/zurich/gaucho_130865v
You just have to love the Gaucho - except if you’re vegetarian, perhaps. The small restaurant with its walls plastered with photos and dozens of framed …
see more
Steaks & Barbecue

Langstrasse 31
/zurich/metzg_147208v
Metzg is a butcher shop and a restaurant in one. It specialises in local meat, be it beef, pork, lamb or local game. By day the restaurant operates as a …
see more
Steaks & Barbecue

Central 1
/zurich/kings-cave_66737v
Walk down the stairs from the entrance of the Central Plaza Hotel and dive into the atmosphere of a mediaeval castle’s cellar: a fireplace, candle holders and …
see more
French

Ankerstrasse 113
/zurich/brasserie-cafe-de-paris_157888v
The speciality of this French brasserie is entrêcote with café de Paris sauce, a buttery sauce that, according to legend, was invented by the brasserie of the …
see more
Steaks & Barbecue

Sihlstrasse 50
/zurich/george-bar-grill_129524v
Located on the top floor of the same building that hosts the Zurich casino, the kind of swanky George boasts a great terrace. On both sides of the building one …
see more
Steaks & Barbecue

Neumünsterstrasse 34
/zurich/butchers-table_154687v
At the Butchers Table it's all about the meat, be it beef, Black Iberian pork or veal. Choose your meat at the display counter, but don't be afraid to ask for …
see more
Steaks & Barbecue

Glockengasse 9
/zurich/churrasco_68855v
Large cuts of Argentinian beef - that's what the Churrasco in the middle of the old town is all about. Choose your preferred weight and cut - fillet, sirloin, …
see more
Steaks & Barbecue

Manessestr. 38
/zurich/gran-sasso_153862v
The key feature of Gran Sasso is its charcoal grill, which can be found in the middle of the excessively decorated dining room (think oil paintings, mirrors …
see more
Steaks & Barbecue

Klosbachstrasse 2
/zurich/bohemia_97195v
Bohemia’s waiters wear ties - and they’re not the only thing with style around here. The tiled floor and the crystal chandeliers give the Bohemia a …
see more
Steaks & Barbecue

Niederdorfstrasse 13
/zurich/simons-steakhouse_157112v
When you enter Simon's in the Niederdorf section of the old town, you're instantly faced with the core of its kitchen - the flame grill. Luckily the grill and …
see more
Steaks & Barbecue

Bleicherweg 1A
/zurich/coco_152764v
Our evening at Coco was a real blast, and we're not just talking about the food. They serve a surprise menu here, so all you have to choose is the main course …
see more
Steaks & Barbecue

Neufrankengasse 29
/zurich/schnupf_151893v
We like simple concepts, especially if they're executed well and that's definitely the case at Schnupf. The menu offers steaks, Argentinian entrecôtes to be …
see more
Restaurants in Zurich Nord

Schaffhauserstrasse 352
/zurich/rollis-steakhouse_64157v
This is a very popular steak house: if you are a meat lover, this is the place to go - beef, pork, lamb, they have it all. But don't forget to book a place in …
see more
Steaks & Barbecue

Grubenstrasse 27
/zurich/smith-and-de-luma_148777v
We'll be brief. We had a great evening at Smith and De Luma, a joint project by Smith & Smith wine purveyors and De Luma meat producers. The aged beef was …
see more
French

In Gassen 5
/zurich/le-relais-de-lentrecote_161115v
The simple yet refined concept of Le Relais de l’ Entrecôte was invented in 1959 in Paris, but only reached Zurich’s old town this spring. They only serve one …
see more