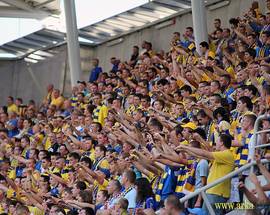 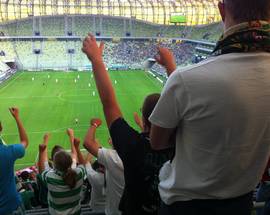 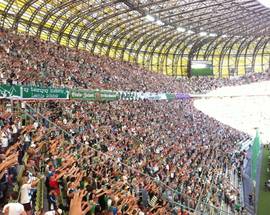 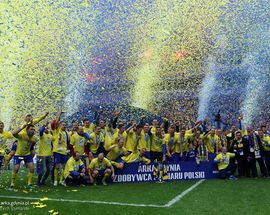 The Tri-city is home to two professional football clubs – Lechia Gdansk and Arka Gdynia. While neither have troubled the trophy engravers a great deal during their history (although that changed in 2017 when Arka surprisingly won the 2016/17 Polish Cup and the 2017/18 Polish Super Cup), both enjoy decent local support and each set of supporters see the other as their major rivals. With the two teams only occasionally being in the same division as each other at the same time, these rivalries are generally lived out through graffiti around the city. On those occasions when they do come up against each other though trouble has been known to flare between the more troublesome elements of each clubs’ supporters.

Both clubs now play in very good stadiums and attendances are on the rise. If you are in town and want to sample a bit of local sporting culture, either club is worth a visit, but don’t expect too much in the way of quality. Despite more money being invested in the sport and with Canal Plus giving the top division (the wonderfully named Ekstraklasa) lots of exposure, it is still a fact that the best Polish players ply their trades abroad. The absence of a Polish club in the group stage of the Champions league in the period from the 1996/97 to 2016/17 seasons should tell you all you need to know about the relative strength of Polish domestic football.

If you're interested to know more about what's going on in the top division in Poland take a look at our season preview and follow the links there to more knowledgeable Polish football watchers than us.

The roots of football in Gdańsk/Danzig can be traced back to 1903, and the creation of Fußballclub Danzig. A new stadium was built in 1927 on what is now ul. Traugutta and in 1935 a modernization program was undertaken to make the arena one of the most advanced in this part of the world.

At the same time that Fußballclub Danzig were kicking their first ball a club called Lechia Lwow (Lechia is the historical name of Poland) was founded by students in the city of Lwow. The club played in the Polish league in the inter-war years, claiming runners-up spot in 1935. However, once WWII kicked off Lwow found itself under Soviet occupation, and both club and players disappeared. After the war the city was ceded to Ukraine and renamed Lviv – which it remains today - while German Danzig became Polish Gdańsk. Waves of Poles migrated westwards to Gdańsk, and in 1945 former residents of Lwow reactivated Waves of Poles migrated westwards to Gdańsk, and in 1945 some, including former residents of Lwow, created Lechia Gdańsk on the ul. Traugutta ground that had been home to Fußballclub Danzig. While the senior side now play their games at the Energa Stadium, Traugutta is still used for training and the matches of junior Lechia sides. It is also where the German national side trained during the Euro2012 tournament. Those interested in the club’s history might like this Facebook page which publishes old photos of the club back to the days of Lechia Lwow.

It is probably fair to say that there is no team in the Polish Ekstraklasa which has experienced as many ups and downs as Lechia Gdańsk. The low-point of the club's history was probably relegation to the third division in 1982, although it would in effect serve as a catalyst for what remains the team's finest hour the following year. Thanks to the coaching duo of Jerzy Jastrzębowski and Józef Gładysz, Lechia were promoted back to the second division in 1983, and, despite being the underdogs, defeated Piast Gliwice in that year's Polish Cup final. This triumph brought European football and the most famous night in the club’s history (see Solidarity F.C.)

This proved to be the high-water mark in the club’s history and by the 1990s things were looking bleak. With the club back in the third division, little investment and limited prospects, someone came up with a plan - ‘why wait for promotion when you can launch yourselves instantly into the premiership’.

The plot reads like an Ealing comedy. In 1995 a merger was proposed with first division Olimpia Poznań, who, anxious to escape the shadow of Lech Poznań, fell for the idea. However away teams refused to travel to Lechia, and the unimpressed FA – who hadn’t sanctioned the merger – awarded away teams an automatic three points. This culminated in a relegation decider with GKS Katowice, who refused to turn up, with the result seeing Lechia being turfed out of the league. What followed was meltdown. Players deserted likes rats and Lechia/Olimpia fell to the third division before Olimpia dissolved the merger and tried to scuttle back to Poznań (Lechia kept the name). Having failed disastrously with the merger idea, Lechia decided to have another go in 1998 and merged with Polonia Gdansk who were also in the third tier. Another relegation followed and Polonia left.

Disillusioned fans, who regularly organised collections to help pay the players’ wages decided enough was enough. Sensing the only way forward was to make a new start in what was effectively the sixth tier of Polish football, they re-booted the club as O.S.P. Lechia Gdansk in 2001 and this sense of a new-start and a new purpose had the desired effect. Lechia, supported by thousands of passionately loyal fans, quickly progressed through the lower leagues winning four successive promotions as champions and by 2008 they were back in the Ekstraklasa, the Polish top division. Though 2011/12 was a poor one on the pitch another milestone was achieved with the club moving from the familiar, but run-down Traugutta ground to the shining new PGE Arena. Built especially to host games in the EURO 2012 finals the stadium was officially opened with a 2-2 draw between the Polish national side and Germany. Lechia enjoyed a pre-Euro boost as well and the stadium saw the 40,000 seats nearly filled for its opening games (attendances have since dropped back into the teens), but the potential for the club, sitting as it does at the heart of a huge potential catchment area, remains huge. With Lech Walesa a proclaimed fan and both the President of the European Council - Donald Tusk - and the President of Gdansk - Pawel Adamowicz both die-hard Lechia supporters, the club has big hopes for the future.

Lechia’s biggest rival is Arka Gdynia, but despite both teams coming from one of the country’s biggest conurbations the first top league derby only happened in 2008. Lechia and Arka have met on relatively few occasions which is probably just as well seeing as these matches can cause huge problems for local police forces. An increasingly family atmosphere and more forward looking and modern club structures make most games at both clubs a pleasant experience. Beware of the peculiar alliances which exist between the fans of different Polish clubs which mean relaxed, celebratory atmospheres when Lechia are playing their 'friends' from Slask Wroclaw (the friendship with Wisla Krakow seems to have been dissolved however) but quite the opposite when they meet their enemies from Lech Poznan or, of course, each other.

One final point worth noting is that you’ll often hear the supporters singing B.K.S. This refers to the name of the club in the period 1955-1992 when it, like many sporting clubs in Poland, was affiliated to one part of the national apparatus. While Legia Warsaw was affiliated to the Polish Army for instance, Lechia were affiliated with the construction sector and were called B.K.S. Lechia Gdansk – the letters standing for Budowlany Klub Sportowy (Building Sports Club).

Gdynia's major club Arka Gdynia trace their roots back to 1929 to the Klub Sportowy Gdynia and to this day they still kick off their evening home games at 19:29 as opposed to the 19:30 favoured by the rest of the league. The year 1934 saw them change name to Kotwica Gdynia (Anchor Gdynia), a direct reference to their dock worker fan base. Another name change followed in 1964 when the club was re-christened Morski Związkowy Klub Sportowy Gdynia (Maritime Union Sports Club Gdynia), and the club chose to celebrate the new millennium by once more changing their title, this time to Arka Gdynia.

Success has largely eluded AG, and it wasn’t until 1974 that they finally made it to the top flight. Their one piece of silverware arrived five years later in the form of the Polish Cup and this was as close as they came to enjoying a heyday. A record seventh place finish had been achieved two years previous, and it was during this decade that the side could rely on local legends like Janusz Kupcewicz and Andrzej Szarmach, a star of the Polish bronze medal winning side at the 1974 World Cup Finals.

As is the fashion in Polish football, Arka fans have allied themselves to Lech Poznan and Cracovia Krakow, and matches featuring these sides see mixed sections and a good ole’ knees-up. If, by chance, Slask Wroclaw or Lechia Gdańsk are in town then expect battalions of robocops trying to keep the peace.

These days Arka play in their completely rebuilt, 15,000 seater Municipal stadium which forms part of the city’s sporting complex (there’s also a rugby stadium and top-class sports hall which hosts basketball and volleyball). The stadium was the Republic of Ireland football team’s training base during Euro 2012.

Arka fans are nicknamed the Herrings (śledź), a name they embrace with a wry sense of humour.

ul. Olimpijska 5, Gdynia (Redłowo)
/gdansk/arka-gdynia_35240v
Arka Gdynia play at the modern 15,000 seater stadium built on the site of their old one at Gdynia-Redłowo. Foreign visitors are best advised to take seats in …
see more
Places of Interest

ul. Pokoleń Lechii Gdańsk 1, Gdańsk (Letnica)
/gdansk/stadion-energa-gdansk_111932v
‘What did the Euro 2012 football finals ever do for us?’ Well in Monte Pythonesque style, apart from the new roads, the new airports, the new train stations, …
see more

Where to watch the match in Tri-city feature
Did Poland Really Escape the Black Death? Coronavirus in Poland
Visit Toruń feature
see more