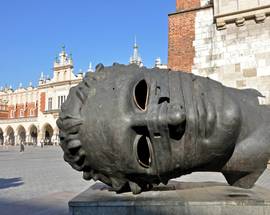 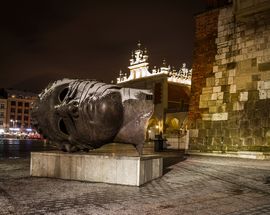 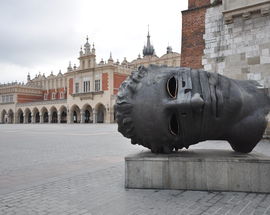 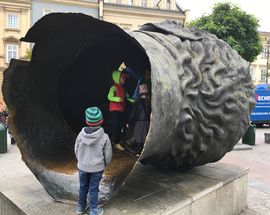 Among Kraków’s most well-known landmarks, this sculpture in the western corner of the market square is a popular meeting place and at some point serves as a photographic backdrop for almost every tourist who visits the city. Affectionately referred to as ‘The Head’, the bronze body part’s official title is ‘Eros Bendato’ (Eros Bound) and is the work of Polish artist Igor Mitoraj (1944 - 2014). A student of Tadeusz Kantor at the Kraków School of Art, an exhibition of 14 of Mitoraj’s monumental works dressed the Rynek from Oct 17, 2003 to Jan 25, 2004, during which the artist gifted this work to the city, sparking controversy over what to do with it. Initially, the sculpture was designated for the square in front of Galeria Krakowska, but the artist was indignant about having his work in front of a commercial building. Despite protest from historians and many locals, the sculpture eventually found its current place near the Town Hall Tower, where it has become an unexpected tourist attraction. In summer, children can be seen crawling all over the hollow edifice, sticking their heads and limbs through the eyeholes for camera-snapping parents, though winter too often finds it profaned with trash and foul-smelling liquids. Fans of Mitoraj’s work will find another of his large sculptures – titled ‘Luci di Nara’ - adorning the charming courtyard of Collegium Luridicum (ul. Grodzka 53), and another in front of the Kraków Opera building (ul. Lubicz 48).

Rynek Główny 1
/krakow/town-hall-tower_17118v
After many fires, renovations and uncaring demolitions, the only element of the 14th century Town Hall remaining is this 70m-high tower, proudly standing next to the
see more