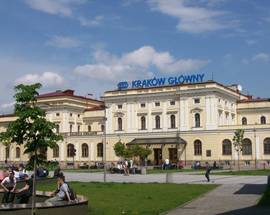 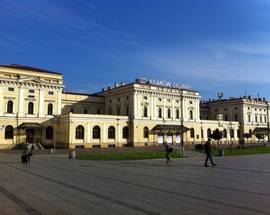 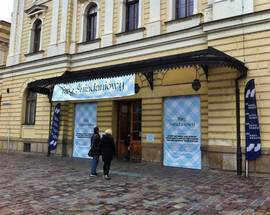 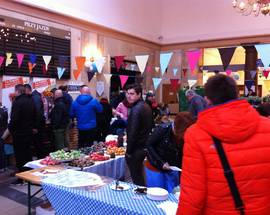 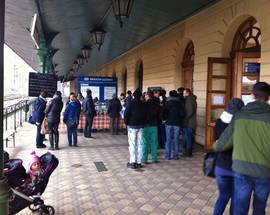 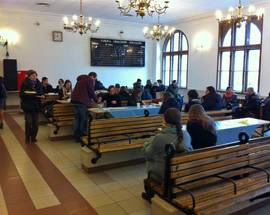 The work of architect Peter Rosenbaum – who would go on to design Wrocław’s immaculate station ten years later – the main hall of Kraków's was built between 1844 and 1846, with neo-renaissance decorations like turrets and crenellations whimsically added to the exterior. Over the following decades it would be extensively re-modelled, with bits and pieces knocked down and added at the drop of a hat. A bridge over ul. Lubicz designed by Teodor Talowski was built in 1898, and a spate of tunnels and platforms were added in the immediate years before and after. In spite of extensive modernisation in the 1920s – which included the creation of a water tower, printing house and residential estate for railway workers – plans were drawn up in 1934 to relocate the train station – albeit by only 300 metres.

Under Nazi occupation the future of the station again fell under threat, with plans to build a new one in the government quarter located across the river in Dębniki. Even after the Nazis were vanquished the train station could not breathe easy; in keeping with the decentralisation policy of communist planning, sketches were drawn up to build a primary station next to Rondo Mogilska, an area that the authorities wanted to develop in a bid to outshine the decadent Old Town. Fortunately cash is king and the commies had run out of it; the only sign of their grandiose plan today for over 40 years was the half finished NOT building, lovingly referred to by locals as 'Skeletor', which will finally be completed in 2017.

With the Soviet era scuppered and the capitalists at the controls, the city went about cleaning up the area, creating a new plaza in front of the building and capping it with the Galeria Krakowska shopping mall in 2006. But why stop there when there's more EU money to spend? Following a 130 million PLN investment, Kraków Główny has been moved completely underground in the form of a modern transportation hub connecting the city's train, bus and local tram services. Opened as recently as February 2014, the new train/transportation centre offers even more commercial opportunities and does a great job of making the Galeria Krakowska shopping mall, rather than the square in front of it, the main gateway into the city for new arrivals. Go figure.

And what of the old station building? Now obsolete, it has found a new function a venue for large events, from food and fashion markets to temporary art installations. Currently the old station is home to Historyland - a family-oriented educational attraction that shows the country's history with elaborate Lego displays.