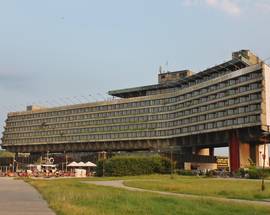 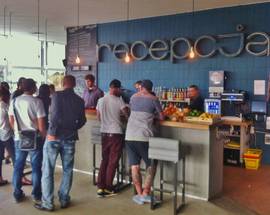 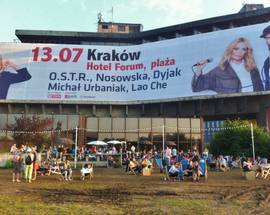 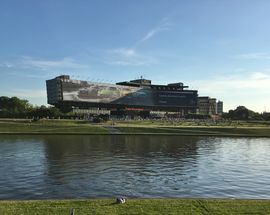 Described in the first issue of Krakow In Your Pocket back in 1999 as ‘a legacy of the era of Soviet hospitality,’ you’ll understand why when you see it. Essentially looking like a cinder block set on top of some Lincoln Logs, construction on this concrete beauty began in 1978 and despite the ribbon cutting not taking place until 11 years later, it was still considered one of the most futuristic buildings in Kraków at the time. Awarded four stars, the hotel featured perks unknown in 1980s Krakow: air-conditioned rooms, an outdoor electronic clock with temperature displays, swimming pool, mini golf and casino. Having passed from the Orbis brand to the Sofitel in 2001 the hotel was closed at the end of 2002, apparently because of a construction fault that led to frequent flooding of the basements. Today the mostly vacant riverside building is owned by the Wawel-Imos group, and though its future is uncertain it presently makes a handsome living as Poland’s longest billboard, while lending its former reception area and ground floor to one of Kraków's trendiest bars (Forum Przestrzenie) and a sauna complex (Termy Krakowskie Forum), while its parking lot is occupied by a go-cart track. Recently, the original basement club Crazy Dragon has been reopened as Klub 89.
Show on map

Went to forum enjoyed my stay !
Take your guide with you Download a pdf