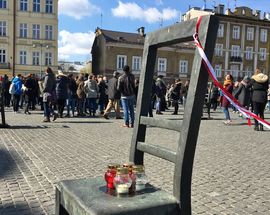 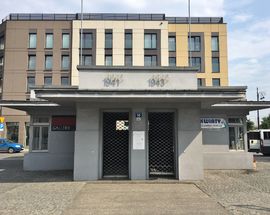 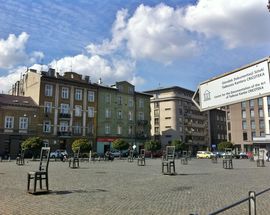 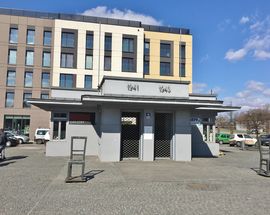 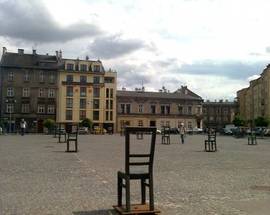 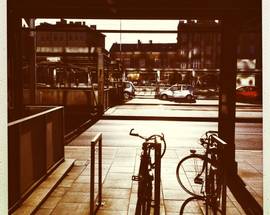 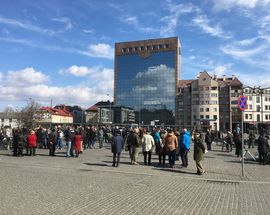 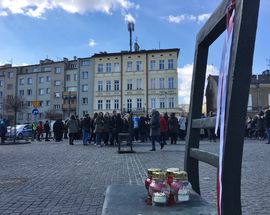 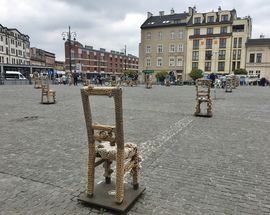 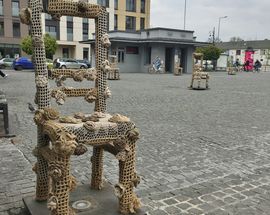 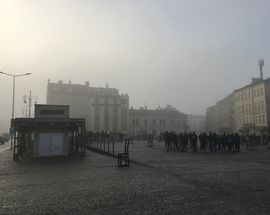 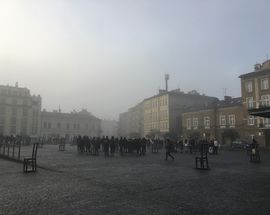 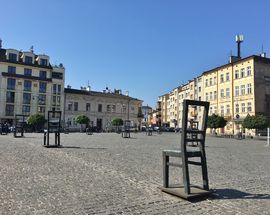 First plotted out in 1836, this public square just across the river from the Powstańców Śląskich bridge has had a turbulent history, with turns as a marketplace, horse stable, execution site, taxi rank and bus terminal over the years. During the time of the Kraków Ghetto it was at once the source of the residents’ greatest relief and also the scene of their greatest horrors and humiliation. As the ghetto’s largest open space, Plac Zgody was a place for people to socialise, relax and escape the oppressive overcrowding of the tenements. It was also the site of families being torn apart, mass deportations to the death camps, beatings and executions. Following deportations and the final liquidation of the ghetto, Plac Zgody was strewn with furniture, clothes, luggage and other belongings that the victims had been forced to abandon - this image would later inspire the redesign of the square. Though after the war the name of Plac Zgody was changed to Plac Bohaterów Getta (Ghetto Heroes Square) and a small monument was erected, the space’s historical significance never felt more pertinent than its post-war use as a public toilet or parking lot. Finally, after decades of neglect, Plac Bohaterów Getta was renovated in 2005, sparking significant controversy over the design. Laid out with 70 large well-spaced metal chairs meant to symbolise departure, as well as subsequent absence, the entire square has essentially been turned into an odd, but iconic memorial to the victims of the Kraków Ghetto. A place for candles and reflection was created in the former German guardhouse at the north end of the square, however the gesture rings hollow considering the space is always locked.

During the war, Plac Bohaterów Getta 6 was the regular meeting point of the Jewish Combat Organisation (ŻOB), as noted by a plaque on the front of the building. Kraków’s Jewish underground resistance orchestrated acts of sabotage outside the ghetto, with their greatest success coming in December 1942 when a grenade detonated inside the Cyganeria Café – a popular meeting place for Nazi officers on ul. Szpitalna - killing and wounding several Germans. Plac Bohaterów Getta 18 - on the south side of the square at the corner of ul. Targowa – was the site of Pankiewicz’s famous Apteka Pod Orłem, now a branch of the Kraków History Museum with exhibits depicting life in the ghetto. Every year on the Sunday following the March 14th liquidation of the ghetto, a remembrance parade honouring the victims sets off from Plac Bohaterów Getta to the Holocaust monument on the site of the former Płaszów camp.

Pl. Bohaterów Getta 18
/krakow/eagle-pharmacy_16498v
When the Nazis created the Jewish ghetto in Podgórze in 1941,
see more