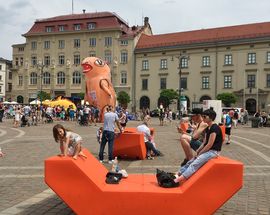 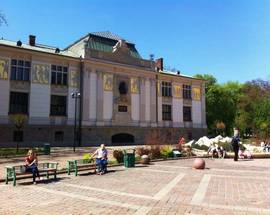 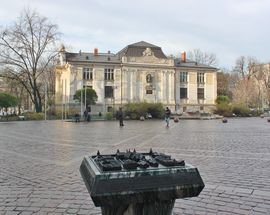 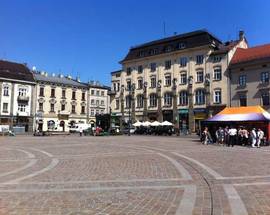 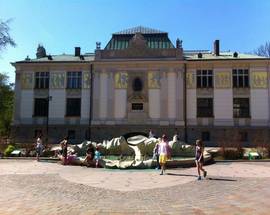 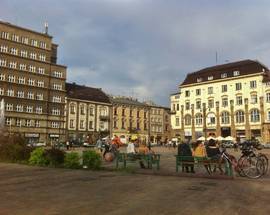 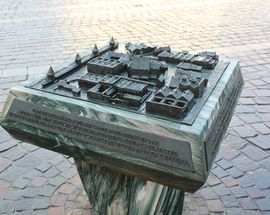 Despite its prime location lined with beautiful Art Nouveau townhouses, it wasn’t long ago that this historical square was an eye-offending car park flanked with taxis and flowerless concrete flowerbeds. Reintroduced to the public in 2010 after two years of work and 13 million PLN spent, Plac Szczepański has been reclaimed as a space for public leisure with benches, plants, and a large multi-media fountain with many jet streams, some of which spring straight out of the ground in front of the main pool. Despite critical grumblings from the city’s conservative architectural and historical community, residents love the fountain, with kids and dogs happily splashing through its waters in the summer. The fountain, which is illuminated by coloured lights in the evening, has quickly become the most popular place to cool off in the city centre during the warmer part of the year, though you'll find it inoperative in winter.

Taking a spade to Plac Szczepański was no easy task, and to no-one’s surprise numerous archaeological discoveries repeatedly delayed the work. Centuries before any pavement was ever laid down, this was the site of the Church of Saint Szczepan (hence the name) and an adjoining cemetery. When the order was disbanded in the early 19th century, the church was levelled and the inconveniently placed gravestones were likewise ripped out. The arrival of Napoleon’s army in the early 19th century breathed a brief flicker of life in Plac Szczepański when it became a parade ground. Plans for a monument glorifying the diminutive general’s achievements went out the window when the Frenchman’s campaign hit the skids on the plains of Russia and Plac Szczepański soon reverted to functioning as a vegetable market, before becoming a parking lot in the 1960s. Today the square is used for public art, concerts, festivals and other events, while the buildings around it showcase some of the city’s finest Art Nouveau architecture. Don’t miss the reliefs on the façades of the historic 1843 Teatr Stary at number 1, the 1909 Secession building of the Agricultural Society at number 8 or the 1901 Palace of the Arts at number 4. Draped in art not only on the exterior, the Szołayski House at number 11 houses a branch of the Kraków National Museum.

ul. Jagiellońska 1
featured
/krakow/stary-teatr_16528v
Indeed the second-oldest theatre in Poland, the 'Old Theatre' has had a complicated history closely intertwined with that of the Słowacki Theatre. Established in
see more
Featured

The Palace of Fine Arts

ul. Jagiellońska 1
/krakow/micet-interactive-theatre-museum_148409v
This new name-challenged museum in the basements of the Stary Teatr (Old Theatre) presents the theatre's achievements through a digital archive, pays homage to theatre
see more

Probably my favourite square in the Old Town. Plenty of space beautiful art nouveau facades and there are some pretty great bars and cafes along ul. Szczepanska.
Take your guide with you Download a pdf