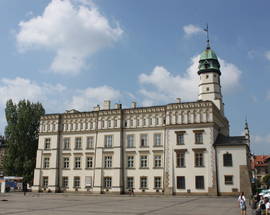 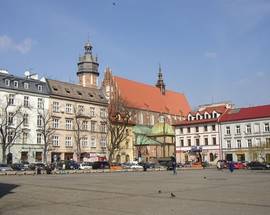 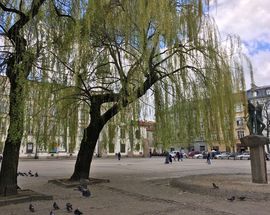 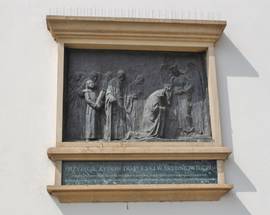 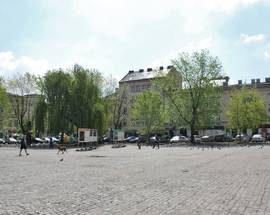 Visiting today, it’s hard to imagine that Plac Wolnica was once equal in size and stature to Kraków’s Rynek Główny. When laid out as the town square of Kazimierz (Rynek Kazimierski) upon the town’s establishment in 1335, this space measured 195m by 195m (only 5m shorter on each side than Rynek Główny) making it the second largest market square in Poland, if not Europe. It was here that all the administrative and judicial authorities of Kazimierz were established, as well as hundreds of market stalls selling everything from fur and tobacco to salt and amber. Hardly the bustling marketplace it once was, today’s Plac Wolnica (named so since the end of the 18th century when it was granted the privilege of free trade) covers only a small fragment of the square’s original size. Fortunately the Town Hall which stood at its very centre has managed to survive. Falling into ruin after Kazimierz’s incorporation into Kraków in 1802, the Town Hall was taken over by local Jewish authorities who renovated it into its present neo-Renaissance style in the late 19th century. A curious plaque on the building commemorates the arrival of the Jews to Poland in the Middle Ages, and since WWII the Town Hall has housed the Ethnographic Museum.

Despite the square's former status, Kazimierz's urban revitalisation over the last two decades was slower to reach Plac Wolnica than Kazimierz's once predominantly Jewish neighbourhoods around Plac Nowy, but the square was making good progress as cafes and restaurants have sprouted up all around its edges - as well as down ul. Mostowa, which leads straight from Plac Wolnica to the pedestrian bridge connecting it to Podgórze. Ironically, after becoming frequent host to a range of cultural events, the renovation of ul. Krakowska begun in summer 2019 has turned Plac Wolnica back into a car park; here's hoping it won't stay that way for long (where are we supposed to play frisbee?).

ul. Krakowska 46
/krakow/dom-esterki_148406v
Just around the corner from the Kraków Ethnographic Museum's main branch, Dom Esterki is a smaller space for the museum's ever-changing temporary exhibits. There
see more

Pl. Wolnica 1
/krakow/ethnographic-museum_17075v
Founded in 1911 by the teacher and folklore enthusiast Seweryn Udziela (1857-1937) and located inside Kazimierz’s former Town Hall, this old school museum features some modern exhibits mixed in with some stuffy ones for a bit of a mixed bag. The groud
see more

ul. Św. Wawrzyńca
/krakow/ul-sw-wawrzynca_155831v
Named after Saint Lawrence, this long street in Kazimierz was one of Kraków's most industrialised streets in the early 1900s, and the city's electrical power plant and gas works both rema
see more