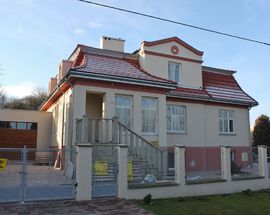 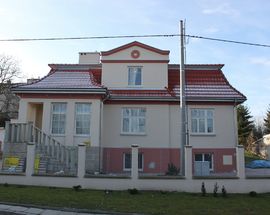 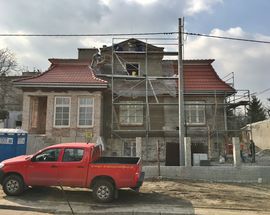 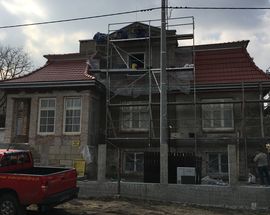 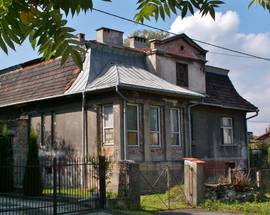 During German occupation Ulica Heltmana, running along the eastern side of the KL Płaszów camp, was known as 'SS-strasse' as it was here that the Nazi officers had their quarters, including camp commandant Amon Goeth's villa at number 22. Known as the 'Red House' due to its paint job at that time, the building was later returned to the family that owned it before the war; in 2015 the property was controversially sold to a private investor and completely renovated for use as a modern family residence, with no acknowledgement of the site's wartime history. It is not open to the public.

Despite being closed to the public, visitors can go around the back on ul. Lecha for a glimpse of the villa's balcony, which overlooked the Płaszów camp. There are archival photographs of Goeth on this balcony with a rifle, and camp survivors have described his sadistic use of random prisoners as 'target practice,' including his own mistress Ruth Irene Kalder, who said she once threatened to stop sleeping with him if he continued to shoot Jewish prisoners from the balcony (a threat she claims was successful). While such testimonies are to be believed, it should be noted that there was a large hill/mound directly behind Goeth's villa, which served as somewhat of a physical barrier between his house/garden and the actual camp. Indeed, Kalder described that she was able to live with Goeth at the villa while being deliberately unaware of what was going on in the camp; the couple spent much of their free time in the backyard and on the balcony, the latter of which was not much higher than the mound behind it, on the other side of which the camp stretched below. As such, Goeth did not have an unobstructed view over the camp, or a clear shot into much of it, as was depicted in one of the most famous scenes of Spielberg's film, Schindler's List. This is not to diminish Goeth's heinous atrocities, but simply clarify a common misconception about one of the film's most remembered scenes.

[This scene of Amon Goeth (played by Ralph Fiennes) shooting prisoners from the balcony of his villa is certainly one of the most disturbing scenes in Schindler's List, and also arguably the most effective at communicating just how much of an inhumane monster Goeth was.]

For anyone who visits Red House, it becomes obvious that Spielberg took liberties with the geography of the camp and Goeth's villa for dramatic effect in his film. In fact, Spielberg used Liban Quarry, 700 metres away from the true territory of KL Płaszów, as the filming location for the concentration camp in Schindler's List. This was done out of respect for the actual site, and for the fact that it was an easier, more self-contained shooting site, and simply looked better on camera. A visit to Liban today actually reveals artefacts both from the historical mining that was done there in the past, and traces of the film set left by Spielberg's crew. In the film the 'Red House' has been moved from its true location on ul. Heltmana to the cliffside overlooking the Liban Quarry.


An organisation should have bought the house and turned it into a museum or at least left it the way it was. Since the house has now been renovated by the new owner all history the house had is now lost.
11.10.2021
Anna
Krakow
There is no plaque, it looks like a luxury house. Still has the same address,that the new owners couldn't change.
31.01.2021
Aly T
Nebraska
I’m currently working on a book about the Holocaust and am trying to find out if the man went through with it or if there’s at least a plaque maybe also the sale price
25.05.2013
ScottsiteS

Yes the house is for sale. I informed a number of Jewish organisations about this via email and through friends, but never heard another back. This site is very disturbing in a unique way I can&#039;t describe. More disturbing than even Auscwitz in many ways. Perhaps it&#039;s the absence of tourists at the site
11.04.2013
Editor IYP

Apparently the house is now for sale. Place your bids...
Take your guide with you Download a pdf