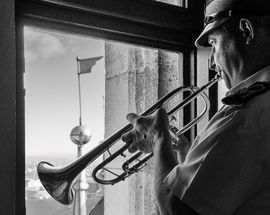 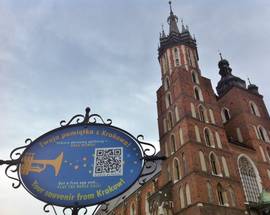 One of the most fascinating traditions for tourists and Cracovians is the hejnał (pronounced "hey-now") – a short, melodious bugle call played every hour from the east, west, north and south sides of St. Mary Basilica's left tower.

Ergo the most fascinating and enviable profession carried out 54m above the city has to be that of the trumpeter who plays it.
Michał Kołton has been responsible for the tradition since 2006 when he took over the role from his father, Jan Kołton, Senior Fire Marshall for the Kraków Fire Brigade. Jan himself had been climbing the 239 steps of St. Mary's tower to carry out the tradition since 1971, keeping the hejnał in the family after his own father’s 35-year stint.

But the job is more than a source of pride and family heritage. The seven firemen chosen to play are on call for a 24-hour rotation then off for 48 hours. While on call, they must be alert every hour to ring the church bell and play precisely on the hour. The seven trumpeters carry out their duty with great discipline, as such a long-lasting tradition cannot be neglected.

And what a tradition it is. The most commonly read legend tracing the hejnał is that one morning in 1241 the Tartars invaded Kraków (as they always do). The warning song was blared to arouse the slumbering city to arms. The man playing was shot in the neck, thus abruptly cutting off the song in mid-melody. To this day, the tune cuts off in mid-recapitulation symbolizing Kraków's vigilance as well as commemorating the lone night guard who aroused the city to defence, thereby saving it. However, Polish journalist Leszek Mazan wrote in Polityka magazine that he believes American journalist John M. Kelly fabricated the 'legend' in 1929.

While little to no documentation regarding the origins of the song has been found, Mr. Kołton and the other players are certain the song's story far precedes John Kelly's writing as a fire warning for the city. The melody came from Hungary and was appropriately used as a warning for fires or invasions as the word 'hejnał' in Hungarian means ‘wake up’. Prior to the 15th century when the tower on St. Mary's was completed, this warning was sounded from the city walls, which is most likely where the legendary trumpeter was shot and killed. While the historical birth and development of Kraków's trademark remains a mystery, any visitor or Cracovian will surely attest that the hejnał's living tradition defines and shapes Kraków. In addition to pleasing visitors able to witness the bugle call live from the church tower every hour, the tune can also be heard all over Poland when it is broadcast live every day at noon on Jedynka Radio, number 89.4 on the radio dial in Małopolska.
Churches

Pl. Mariacki 5
featured
/krakow/st-marys-basilica_17091v
After Tartar raids in the 13th century left the original church in a heap of ruins, St. Mary’s was rebuilt in Gothic style on the existing foundations and …
see more
Featured
Streets & Squares

featured
/krakow/main-market-square_37319v
Kraków’s main market square ('Rynek Główny') serves as the city’s gravitational centre, and is the natural start and finish point for any tour of the city. …
see more
Featured