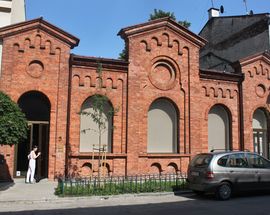 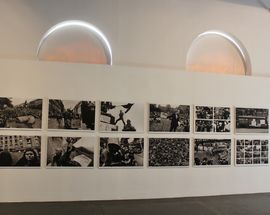 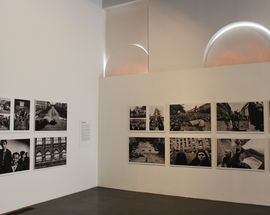 One of the largest private galleries in PL, this renowned exhibition space inside a former Jewish synagogue focuses on the best in Polish post-war art. Built between 1879-1881, this unique brick building was formerly the Zucher Synagogue - one of four Jewish prayer houses within the Kraków Ghetto, the others being located at numbers 6 and 7 on the same street and nearby at ul. Krakusa 7. Practising Judaism was outlawed by the Germans during World War II (though it continued in secret) and the synagogue was converted into a warehouse and then a factory. When the Kraków ghetto was established, many valuable religious artefacts from Kazimierz synagogues were transferred here for protection, however the eventual liquidation of the ghetto guaranteed that they were looted and lost. After the war the building slowly fell into dereliction until Andrzej and Teresa Starmach rescued it in 1996, restoring the facade and turning it into a private art gallery. The exhibitions are always outstanding and a visit is highly recommended.

Definitely worth a visit if you're in Podgórze,  we'd consider this gallery one of the area's prime cultural attractions. Exhibits are top notch.
Take your guide with you Download a pdf