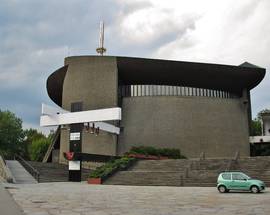 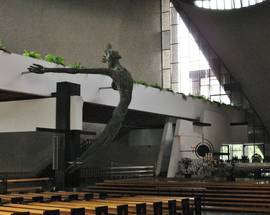 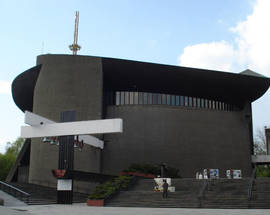 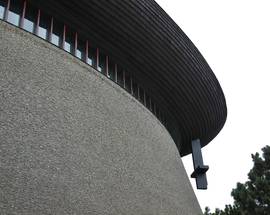 Built between 1967 and 1977, Nowa Huta’s first house of worship was designed by Wojciech Pietrzyk and was pieced together brick by brick by volunteer workers with no assistance from the communist authorities. The complete opposite of what Nowa Huta was meant to stand for, The Lord's Ark (Arka Pana) is a remarkable building, and a true symbol of the Polish belief in Catholicism. With no outside help it was down to the locals to mix cement with spades, and find the two million stones needed for the church’s facade. The first corner stone was laid in 1969 by Cardinal Karol Wojtyła, who would later assume fame as Pope John Paul II, but the discovery of a WWII ammunition dump delayed work, as some 5,000 mines and shells had to be carefully removed. Finally, on May 15th 1977, the church was consecrated. Built to resemble Noah’s Ark, with a 70 metre mast-shaped crucifix rising from the middle, the church houses an array of curious treasures, including a stone from the tomb of St. Peter in the Vatican, a tabernacle containing a fragment of rutile brought back from the moon by the crew of Apollo 11, and a controversial statue of Christ that shows him not on a cross, but about to fly to the heavens. If you think that's odd, check out the statue dedicated to Our Lady the Armoured – a half metre sculpture made from ten kilogrammes of shrapnel removed from Polish soldiers wounded at the Battle of Monte Cassino. In the early 1980s, the church became a focal point during anti-communist protests, not least for the shelter it afforded the locals from the militia. Protesting during the period of Martial Law was dangerous business, as proven by the monument dedicated to Bogdan Włosik opposite the church. Włosik was shot in the chest by security services, and later died of his injuries. His death outraged the people, and his funeral was attended by 20,000 mourners. The monument commemorating the site of his death was erected in 1992 and is a tribute to all those who died during this period. In 2012 Kraków City Council awarded Arka Pana the 'Cracoviae Merenti' silver medallion for its significance to the city's history.

ul. Ludźmierska 2
/krakow/nowa-huta-cross-riots_55753v
Conceived as an ideal socialist city, Nowa Huta was to be atheist by definition and as such its design didn’t designate any urban plots for troublesome churches. As one can imagine, the p
see more