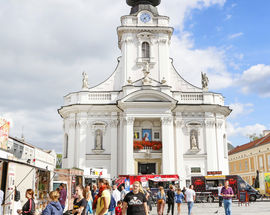 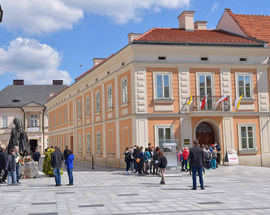 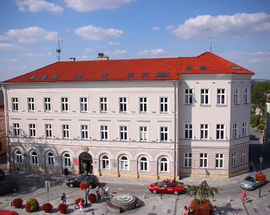 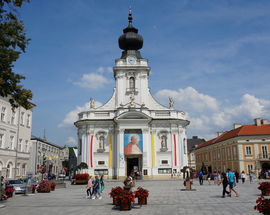 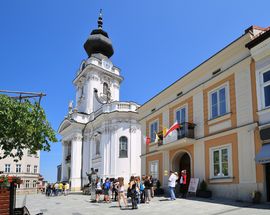 Despite being a typically charming small Polish town with a historical centre organised around a main square and church, Wadowice - with its population of less than 20,000 - would be decidedly unremarkable were it not for the simple fact that it was here on May 18, 1920 that Karol Wojtyła - the future Pope John Paul II - was born. This otherwise sleepy Małopolska municipality has turned into a major place of pilgrimage, and today boasts a state-of-the-art museum dedicated to the former Pope, which makes the easy 50km trip from Kraków well worth considering for Catholics and papal enthusiasts.

What to See in Wadowice

Wadowice’s main points of interest can all be easily seen in an afternoon and revolve around the town’s small central square - now appropriately named 'Plac Jana Pawła II' (John Paul II Square). The main attraction is John Paul II's Family House - a modern, multimedia museum which immerses visitors in the great man's life and accomplishments in the very building he grew up in. Next door on Wadowice's main square stands the Virgin Mary's Offertory Minor Basilica, a rather splendid 15th century structure renovated in the 18th and the site of Karol Wojtyła's baptism on June 20, 1920. Outside the church is a large monument to the man, while inside you'll find a chapel dedicated to him, as well as another likeness in the form of a rather bizarre-looking wooden statue.

Don't make your visit only about sightseeing, however. John Paul II had a remarkably sweet tooth, and during his 1999 return visit to his hometown as Pope he made a passing remark about his fondness for kremówka, a local cream cake he used to buy in Karol Hagenhuber's confectionery shop on the town square. Naturally the locals went wild for his comment and just about every shop in Wadowice, regardless of whether it sells food or not, now sells slices of 'kremówka papieska' (the Pope's cream cake) for visitors to try. Consisting of two thin layers of puff pastry filled with vanilla custard cream and topped with powdered sugar, it's become the town's trademark comestible, so do indulge yourself while in town.

Getting to Wadowice from Kraków


Getting to Wadowice is best done by car or bus. Approximately 50km to the southwest on the way to Bielsko-Biała, the journey takes about 60mins by car and there is free parking less than 500m away from the main square on ul. Sienkiewicza. If you have your own vehicle, you should highly consider taking the route through Kalwaria Zebrzydowska - another fascinating Catholic pilgrimage site, which is registered on the UNESCO World Heritage List. Together, Kalwaria and Wadowice make the perfect day trip from Kraków.

Buses to Wadowice leave frequently (every 15mins on average) from Kraków's main bus station with a journey time of about 80mins. Connections can be checked via e-podroznik.pl or busy-krk.pl/wadowice-krakow, and tickets can be bought from the driver for about 10zł. Bus Janiso runs a frequent route with one stop in Kalwaria; see timetables here. The bus station in Wadowice is only about 10mins on foot (700m) from Plac Jana Pawła II and the JPII Museum.

To save yourself some trouble, there are numerous Kraków-based companies that offers tours and transport to Wadowice, some of which also include other popular pilgrimage sites in the area such as Kalwaria Zebrzydowska and Częstochowa.

What to See & Do in Wadowice

ul. Kościelna 7, Wadowice
featured
/krakow/john-paul-ii-family-home-museum_68122v
Located right on the corner of Wadowice’s main square, it was in this townhouse that the Wojtyła family lived in a small apartment from 1919 to 1938.
see more
Featured
Wadowice

Jaroszowice 234, Wadowice
/krakow/mlyn-jacka-hotel-spa_145082v
Located on the premises of an old brick grain mill, this once-abandoned property has been transformed into a modern four-star hotel, spa and conference centre. …
see more