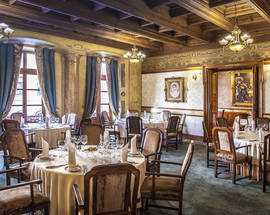 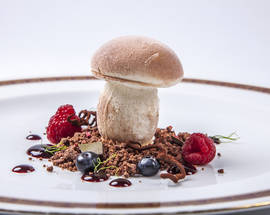 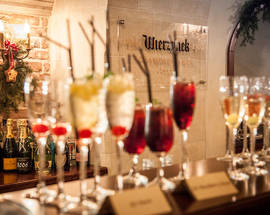 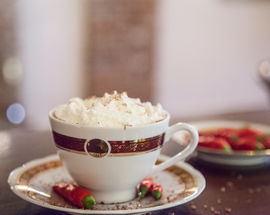 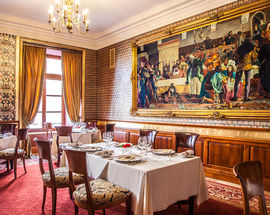 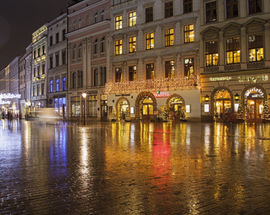 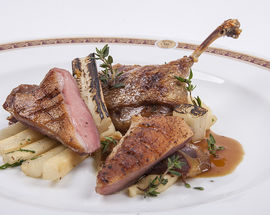 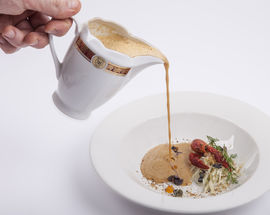 Quite a launch party this place: according to legend the opening night back in 1364 was attended by five kings and nine princes. Since then it’s been one esteemed guest after another, with former diners including De Gaulle, Bush, Castro and other world leaders, as well as starlets like Sophie Marceau and Kate Moss. The immaculate interiors of original period furnishings, tapestries, oil paintings and incredible timber ceilings aren't too dissimilar from a tour of Wawel Castle (making it a perfect backdrop for the frequent Chopin concerts) and you can expect a royal treatment from the staff. The seriously high-end menu is based on the traditional feasting habits of the Polish monarchy, but it hasn't failed to adopt modern influences as well, meaning you'll eat like a king and remember the experience - one you could only have in Kraków - for quite a long time. If you aren't ready for a white glove dinner, you can now visit their champagne bar.

Rynek Główny 15
/krakow/tradycyja_112272v
Though somewhat haunted by the spectres of past incarnations (a pizza oven in the corner goes largely unused), there's no need to mess with this historic market square locale,
see more

It’s history is not reflected in its current service offered. We dined there 2 years ago and enjoyed the experience we flew to Krakow purely to enjoy it again. It could not have been more of a contrast and the waiter called Kamil would have been more at home in macdonalds. There is a fabulous restaurant next door called The Grey Goose which is by far a superior dining experience.
11.11.2013
Lars Helander
Sollentuna / Stockholm
Question: Was there once also a hotel Wierzynek? I think I stayed there in 1964, but maybe I just went to the restaurant? (In that case, the hotel was next door...) I&#39;ve been back to Krak&#243;w a few times since then, on my way now again. &#34;In My Pocket..&#34; is a great publication &#045; I well remember the first Baltic editions from the nineties...
23.05.2011
brian

First time I visited Krakow in December 1939 escaping to Hungary. Could not afford time or money then. Second time in 1989 on June 2 election day with my wife. Had fantastic few meals and afternoon cakes and tea downstairs at Wierzynek. Third time in 1994. Took my son to Wierzynek and he would not go to any other restaurant for the rest of our stay in Krakow. Thank you for the fantastic epicurean experience.Tadeusz November 30,2010
05.01.2010
Letitia

Even in communist times the Wierzynek had professional service, wonderful atmosphere and fine food. The US students in Krakow would have their annual Thanksgiving dinner there every year, and it was always a fantastic evening. The chef has expanded the menu considerably since then, and the ambience is one for a special event. Not cheap, but worth it. Afterward, a walk around the Old Town Square to walk off the dinner and get some fresh air is a great way to finish the evening.
12.12.2007
Joan