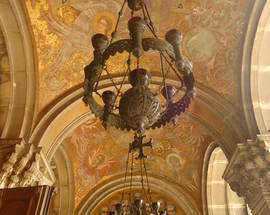 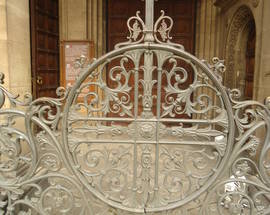 Named after Saint Alexander Nevski, the patron saint of TsarAlexander II, a canonised prince who saved Russia from invading Swedish troops in 1240. Tsar Alexander II, is also referred to as Bulgaria’s Tsar Osvoboditel (Liberator), since it was his troops that finally brought about Bulgaria’s liberation from Ottoman rule. The foundation stone of Sofia’s biggest church was laid in 1882.

Built between 1904-1912 in the Neo Byzantine style, typical for Russian churches in the 19th century, the cathedral is 76 metres long and 53 metres wide and is said to hold up to 7000 people. It covers an area of 2600 square metres. The belfry is 52 metres high and houses 12 bells. Some of Russia and Bulgaria's best artists of the time worked on the interior with its five aisles and three altars. Sienna and Carrera marble in the entrance area, stained glass windows, Venetian mosaics and dramatic murals such as The Lord God Sabbath in the main cupola, and The Day of Judgement above the exit, onyx and alabaster columns on the thrones all add to the richness of the interior without making it in any way gaudy. The spectacular external golden domes were covered in gold leaf, donated by Russia in 1960 and have recently been regilded.The Russian architect A.N.Pomerantsev is also the architect of the famous GUM (State Department Store) in Moscow.

Find time to visit the crypt under the cathedral with its fascinating collection of icons.

I have a small round wooden disc etched or burnt with a picture of the Cathedral and the name of it, do you know what this is?
Take your guide with you Download a pdf