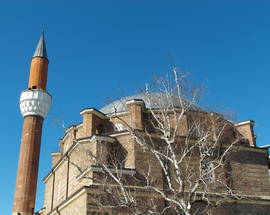 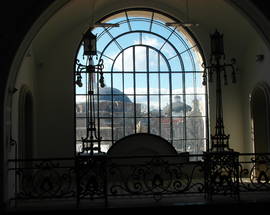 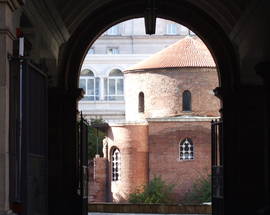 Directly in front of the Sofia Balkan Hotel ( formerly the Sheraton) you will see the St. Nedelya Church, situated on the square of the same name. Its central location makes it the focal point for locals and you may well be able to observe a wedding, christening or funeral.

Making your way to the courtyard area behind the Hotel, you will find the St. George Rotunda set among the excavations of ancient Roman ruins. Flanking the courtyard at the opposite end is the Presidency, the administrative quarters of Bulgaria's president. The beautifully attired guards of honour outside the entrance are well worth a snapshot. Looking diagonally across from the Presidency you will see an imposing white colonnaded building, flanked by major traffic routes either side. This is the former Communist Party House (until August 1990 seat of the Central Committee of the Communist Party) and marks the top end of an area known as the Largo with its unique yellow brick road. The yellow bricks were in fact a present from the Austrian Emperor Franz Joseph to his cousin Prince Ferdinand of Saxe-Coburg in 1907. The column at the top of the building was in it’s hey day adorned with a red star! This was removed after the collapse of the communist era.

Crossing the Largo by means of one of the underpasses, which have recently been renovated and now showcase ancient Serdica's ruins as well as housing souvenir shops and toilets, you will reach TzUM, formerly Sofia's main department store, and now revamped as a retail centre, which somehow fails to attract the foot traffic.

In the underpass directly in front of Tzum, nestled among the souvenir shops and Tourist Information Centre, is the tiny church of Sveta Petka Samardzhiiska, built in the 14th century. Behind Tzum at the beginning of Maria Luisa Blvd is Sofia's only mosque, the Banya Bashi mosque, built in 1576. Banya, the Bulgarian word for bath, refers to the adjacent magnificent Baths that were completely derelict and have been painstakingly restored to become the Museum of Sofia. The area in front of the baths has been turned into a pleasant park area with a large fountain at its centre. Locals form long queues to collect the hot mineral water at the tapped springs in the park area. Take care as the water is very hot!

Crossing over Maria Luisa Blvd you will see the beautifully restored Halite, the former food market built in 1909.The main focus of the stalls inside continues to be food From the Halite you have two options. To the south side you can take a stroll along Sofia's only pedestrianised area, Pirotska Street, with its cafes and shops, or on the north side you can walk along Ekzarh Josif Street to Sofia's synagogue another beautiful building recently renovated.

From the synagogue, if you still feel you have the energy, you might like to take a stroll through the backstreets to the Zhenski Pazaar (Ladies Market). This is Sofia's biggest and cheapest market where you can find everything from fruit and vegetables to household products, including Bulgarian ceramics. It is always busy and extra caution is advised regarding your valuables.It recently received a facelift and with that lost some of its curiosity for tourists.

If you make your way through the market you will come out at Lions Bridge. From here you can walk up Maria Luisa Blvd. back to your starting point or take the underground for one stop as Lions Bridge is one of the most attractive underground stations.
Religious Buildings in Sofia

bul. Maria Luiza
/sofia/banya-bashi-mosque_77185v
Ideally located in the centre of Sofia close to the old (and still partially dilapidated) mineral baths, this brick building was built in 1576 and named after …
see more
Museums & Galleries in Sofia

pl. Banski 1, Old Baths
featured
/sofia/sofia-history-museum_139084v
This museum dedicated to the 'History of Sofia' is housed in the magnificent former baths building behind the mosque. It finally opened to the public on 17th …
see more
Featured
Religious Buildings in Sofia

pl. Sveta Nedelya
/sofia/sveta-nedelya-church_77189v
Built at the end of the 19th century, this church is the direct successor of several smaller churches from medieval times and is said to lie directly above the …
see more
Religious Buildings in Sofia

bul. Dondukov 2
/sofia/st-george-rotunda_77190v
This charming round red brick church dates back to the 4th century, although it did not become a church till the 6th century. It is Sofia's oldest preserved …
see more