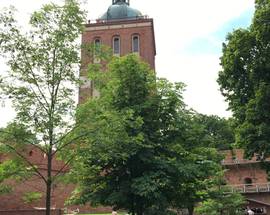 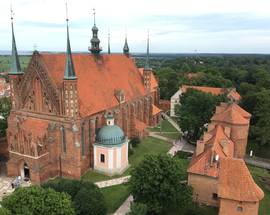 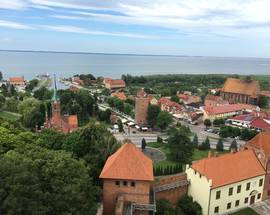 This being a castle fortress, there are a few towers and it's important that you note which is interesting and which is important. The one in the south-west corner is the more interesting and is known as the Radziejowski Tower in honour of the Bishop who restored it in the late 17th century. Originally built at the end of the 16th century, the tower was destroyed in WWII and rebuilt in the early 1970s. Over the centuries the tower has served as a bell tower; observation tower and lighthouse. What it did not serve as though was as an observation platform or workshop for Copernicus. That is believed to be the tower in the north-west corner of the complex.

Inside is a small but rather good planetarium equipped with precise Carl Zeiss machinery that projects images of the sky onto the eight-metre domed ceiling. There are shows during the day, for which you will need to buy a ticket, and although these were only with Polish commentary, we found the experience of sitting gazing at the stars rather interesting. Above the planetarium you’ll find a replica of Foucault's pendulum from 1851, a large ball swinging from the ceiling which demonstrates that the earth is in a state of permanent rotation.

On these lower levels of the tower you’ll also find a rather peculiar collection of modern art on the walls. Skip past these and up the steps to the 70m viewing platform which provides wonderful views of the town below and the Vistula Lagoon (German Frisches Haff), a 90km long lagoon which separates the Polish coastline here and the Russian coastline a little further north from the Bay of Gdansk. Look to the north-east and you’ll just about see the Kaliningrad Oblast, the Russian territory formerly part of East Prussia which had Koenigsburg as its capital. Koenigsburg is just 80km away by road while the border is a mere 20km.

ul. Katedralna 6, Frombork
EDITOR'S PICK
/gdansk/copernicus-grave_146054v
The key sight in the cathedral is the grave of Nicolaus Copernicus, which can be found in the South Nave. Located in the spot where the remains were discovered that were finally proved to be those of Copernicus, the grave features a black granite tombsto
see more
Editor's pick

ul. Katedralna 8, Frombork
EDITOR'S PICK
/gdansk/copernicus-museum_134244v
Housed in the former Palace of the Warmia Bishops on the eastern side of the complex originally dates to the 14th century. The remains of what was by then an 18th century building, were badly damaged by fire in 1945 and it wasn't until the years 1965-
see more
Editor's pick

ul. Katedralna, Frombork
/gdansk/copernicus-tower_134277v
The oldest remaining part of the ensemble is believed to be where Copernicus worked and studied the stars. It was the first place to be opened as a museum to him in 1912 and these days it contains a small exhibition showing how it might have looked in
see more