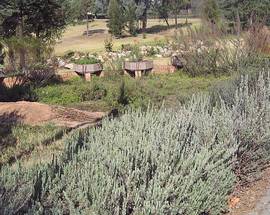 One of the biggest green lungs in the city Delta Park, home to the Delta Environmental Centre, (bordered by the suburbs of Blairgowrie, Victory Park and Craighall Park) offers large stretches of grassland, woodland and wetland dams, a sensory trail for the sight-impaired and even bird-viewing hides. It's also extremely popular with dog walkers.

An entire circular walk around this park is a good 5km trek with plenty of places to stop and admire the great views of the Joburg skyline. In autumn (March, April) don't miss the beautiful blossoming of thousands of pink, purple and white cosmos flowers. The lawns on the southern part of the park are the best spots for a picnic (close to Craighall Road).

For lunch before or a visit after your walk the delightful Delta Cafe, which looks onto the park at the REEA Foundation Urban Farm (on Marlborough Avenue) is recommended. Next door is Gerakaris, Joburg's only winery, where you can organise a wine tasting and buy wines to take home. A Delta Cafe there's a huge covered terrace with a casual breakfast and lunch menu (including a kids menu), as well as the adjoining lively Don Quixote pizzeria and bar. Families will love it as there is a kid's playground and space to park prams. It's also a favourite pit stop for cyclists along the 37km JoziTrails track which traverses the length Braamfontein Spruit. For more ideas on where to grab lunch in neighbourhing Craighall Park, see our Craighall Park dining guide.

The Braamfontein Spruit has been taken under the wing of Hollard Insurance Company, who, together with the city and Jozi Trails are involved in a renewal project of Spruit.

The 37km JoziTrails cycle path runs through Delta park for several kilometres, following the Braamfontein Spruit all the way from Emmarentia and Alberts Farm in the west, and to Rivonia in the north. Horse riders occasionally also make use of this path, with stables located at the REEA Foundation.

If you feel like extending your walk, we recommend taking a stroll north along the JoziTrails cycle path from Delta Park to the Delta Central centre in Blairgowrie (about 20 minutes walk). There are lots of options for dining and drinking here including the Fresh Earth cafe and health food shop, the Mad Giant craft beer taproom and Coalition for excellent Neapolitan-style pizzas.

In the western side of the park (closest to the Victory Park entrance on Craighall Road) is the Delta Environmental Centre, a perfectly preserved three-storey Art Deco building that was originally built as part of a sewage works plant (closed in 1963). The building is now used as an educational centre running officially accredited courses in environmental protection.

Entrance and parking: Delta Park has multiple entrance points and car parks. In Blairgowrie, park at the car park at Pitcairn Road or Bantam Road. In Victory Park follow Craighall Road all the way into the park to park next to the Delta Environmental Centre. If you arrive early you can also usually find parking spots on the street at Marlborough Drive next to the REEA Foundation (from where you can cross the bridge to enter the park).

Houghton Drive, Houghton
EDITOR'S PICK
/johannesburg/the-wilds_150684v
This magnificent historic park with its stone-cut paths and water features, and awe-inspiring city views has in the past decade been brought back to life as a public space by the efforts of artist James Delaney and his team of assistants and volunteers.
see more
Editor's pick

Entrances at 45 Thomas Bowler St and on Olifants Rd, Emmarentia
featured
/johannesburg/johannesburg-botanical-gardens-and-emmarentia-dam_122907v
Founded in 1969 this sprawling green oasis set across more than 80 hectares was once part of a large farm owned by the Geldenhuys family. The park contains both extensive parkland, including a dam and wetlands, as well as more formally planted botanic
see more
Featured

20 Marlborough Rd (entrance via garden centre), Craighall Park
/johannesburg/delta-cafe_133085v
Much as we love Joburg's hustle and bustle, the colour and excitement of its city streets, sometimes you need to break away for a while and sit on the stoep (veranda), look out over the green hills and listen to the horses bray... at Delta Ca
see more

Cnr Westwood Ave and North St, Melrose
/johannesburg/James-and-Ethel-Gray-Park_123636v
The 36-hectare James and Ethel Gray Park is a well-maintained and hilly park that is particularly popular with dog walkers and weekend strollers. From the main parking entrance on North Street you can stand and admire the view of the famous Johannesburg
see more