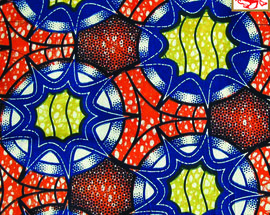 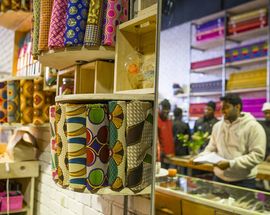 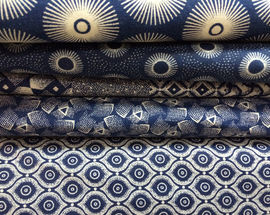 From shweshwe to Basotho blankets, here is our guide to shopping for beautifully patterned African fabrics in Joburg.
​
Many of the brightly coloured and patterned fabrics used in traditional and contemporary African attire actually originated in Asia, France and Scotland before being culturally appropriated. In South Africa, shweshwe, the ubiquitous colourful geometrically patterned wax-printed fabric, was first integrated into the traditional dress of Xhosa women after being imported by European settlers in the 1840s. Meanwhile the thick woolly blankets worn by the Basotho people of Lesotho were originally brought to the region by the Victorians.

Similarly in Senegal the bright and shiny bazin fabric used to make the traditional boubou, originally came to the country from Italy and in Nigeria, the batik-style adire fabrics, traditionally worn sarong-style, are commonly thought to have originated in Japan. The way in which adire fabrics are handmade however is distinctly west African- using cassava starch, patterns are then added to the fabric by using instruments such as chicken feathers before the material is dyed indigo with natural vegetable dyes made from cocoa pods.

The patterns and colours used in these fabrics are often richly symbolic and distinctly. For example the pattern of the Basotho blanket recently referenced by Louis Vuitton in their 2017 men’s catalogue shows cobs of corn representing the harvest, fertility and wealth. Another popular pattern is inspired by a spiral aloe plant found only in Lesotho’s Maluti Mountains.

In Ghana, the Ashanti people’s kente cloth is traditionally made from the black and white fibres of the raffia tree, before being dyed by natural dyes made from seeds and tree bark. The colours used are significant - for example black signifies the African continent while red represents the blood of the forefathers. To become a recognised Master Weaver, a Ghanaian artist must also learn all the meanings of the many different geometric patterns used in kente cloths such as the afa pattern which means “I have taken it” or the ohene anewa which means “The king’s eye, the king sees everything”.

The ubiquitous wax-printed kanga or kitenge cloth (traditionally worn sarong-style or as a headwrap and popular across eastern and southern Africa) is as commonly found printed with colourful patterns as with portraits of political leaders. The kanga cloth (from the old swahili word ‘to wrap') is thought to have originated on the coast of East Africa in the 19th century. Kitenge (also known as chitenge or maphae) is very similar to the kanga cloth and is worn across central and southern Africa. The combinations of patterns and colours is seemingly endless and along with thw wax printed shweshwe fabrics, kitenge fabrics are what you will most commonly find used in local fashion in Joburg.

While cheap Chinese imports abound, there are just as many authentic African fabrics available in Joburg, made using traditional techniques. Authentic fabric labels to look out for include Da Gama’s Three Cats Original Shweshwe and the Basotho blankets made by Aranda Textile Mills.

WHERE TO SHOP FOR FABRICS

BRYANSTON ORGANIC AND NATURAL MARKET
This the best market to visit if you are looking for high quality fabrics made according to traditional methods and organically and ethically sourced. For handmade ready-to-wear clothing that meshes cultures from around Africa check out African Renaissance and also look out for the stall specialising in beautiful woven Ethiopian shawls. The market’s free shuttle picks up visitors at all the major Sandton hotels at 09:00, 10:00 and 13:00, with a return trip via Liliesleaf museum.
40 Culross Rd, Bryanston. Open Thu and Sat 09:00–15:00.

ORIENTAL PLAZA
Visit Fordsburg's famous Oriental Plaza, one of the city’s most famous fabric shopping destinations with more than 350 stores selling everything from homeware and shoes to jewellery and clothing. There are fabric shops galore, fast fashion, and haberdashery from around Africa and Asia including hand-stitched Indian cotton quilts, a wide range of kanga cloths and even Swazi ilihhiya fabrics printed with the images of the Swazi royal family.
38-60 Lilian Ngoyi St, Fordsburg. Closed Sun.

ROSEBANK ART AND CRAFT MARKET
Barter for bright ready-to-wear Afro-chic fashion and fabrics at this huge African art and craft market that is easily one of Joburg’s biggest. This is a one-stop spot for all your African souvenir needs with traders from across the continent selling the widest range of hand-crafted items. Also look out for the weekly Rosebank Sunday Market on the Rosebank Mall rooftop.
Rosebank Mall, Craddock Ave (next to Europa Cafe), Rosebank.

WORK SHOP NEW TOWN
This stylish shopping emporium is housed in the historic Potato Sheds first built in 1911 as part of Joburg's original fruit and vegetable market in Newtown. There are dozens of small stores to choose from showcasing local designers and crafters. For fabrics head to Ndlovukazi where there's a carefully curated selection of fabrics from across the continent, neatly arranged by country.
Cnr Miriam Makeba St and Gwigwi Mrwebi St, Newtown

DIAGONAL STREET
Busy Diagonal Street in the city centre was at the heart of Joburg’s early gold rush and developed into a racially mixed area where trading continued despite the proscriptive laws later introduced. Today a mix of old-fashioned low rise architectural styles characterises the area. The street is lined by traders and shops selling a wide selection of goods including traditional Basotho blankets, kanga cloths, brightly striped Venda nwenda cloths with their distinctive luminous colours and traditional accessories like canes and beaded jewellery. Dress for the city in this area and leave your valuables at the hotel.
Runs diagonally between Sauer St and Ntemi Piliso St, City Centre.

FASHION KAPITOL
The heart of Joburg’s original clothing manufacturing district, this rejuvenated city square is a hub for fashion talent with a nearby fashion college. Fashion Kapitol has an outdoor catwalk to showcase the latest designs from students and designers who have shops there. Check out the massive Studio 109 opposite the square for the biggest selection of wax-print fabrics and Three Cats shweshwe (the brand that first made shweshwe material in South Africa).
130 Pritchard St, City Centre. Closed Sun.

MAKOTIS
Makotis (meaning ‘bride’ in Zulu) is run by the Wadee family who have been selling traditional fabrics and bespoke garments, including clothing for traditional weddings, since 1961. Browse for unique shweshwe fabrics in the biggest range of colours and prints, and then arrange a fitting with the tailor.
112 Helen Joseph St, City Centre. Closed Sun.

40 Culross Rd, Bryanston
EDITOR'S PICK
/johannesburg/bryanston-organic-and-natural-market_62273v
This is the original outdoor market, in existence for 40 years and still offering a superb range of organic goods and products in a relaxed environment. From …
see more
Editor's pick
Food, fashion and craft markets

Runs diagonally between Sauer St and Ntemi Piliso St, City Centre
/johannesburg/diagonal-street_123505v
On busy Diagonal Street with its traders and blanket shops, colour and bustle you can get a rare sense of an earlier Johannesburg. At 11 Diagonal Street is a …
see more
Malls

38-60 Lilian Ngoyi St, Fordsburg
EDITOR'S PICK
/johannesburg/oriental-plaza_123896v
For a different pace to the malls of the Northern Suburbs, head to Fordsburg's historic Oriental Plaza. Boasting more than 350 stores the plaza today is a …
see more
Editor's pick
Fashion and accessories