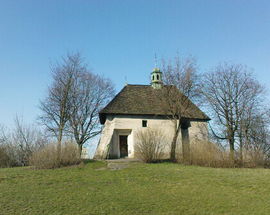 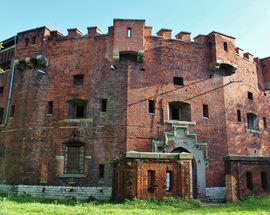 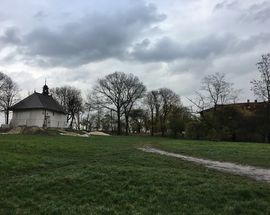 Located above Old Podgórze, Lasota Hill refers to the section of Krzemionki east of Bednarski Park, and home to Podgórze’s richest residences along the picturesque villa-lined lanes of ul. Parkowa, Plac Lasota and ul. Stawarza. But follow ul. Stawarza to its end - or alternatively venture up any of the slightly foreboding wooded trails off of ul. Rękawka (our preferred route) - and you’ll soon end up in an inexplicable meadow in the midst of some of the city’s strangest territory. Once a popular site for pagan worship, the ancient and miniscule St. Benedict’s Church was built here in the 11th century specifically to put a frowny face on such practices. One of the city’s oldest churches, it is certainly the smallest, and after years of restorations it is finally possible to get inside (on Saturdays from July to September only, 11:00-13:00).

The other primary point of interest here is Fort Benedict, the only surviving fortress of three that were built in Podgórze in the mid-19th century; in fact this is one of the few citadels of the ‘Maximillion Tower’ type surviving anywhere. An imposing brick monolith in the shape of a 16-sided polygon, today the fort stands abandoned with the city unable to decide what to do with it. Though you can certainly scramble through the fence to explore it up close, we’re sure you’ll find (like we did) that this fort is indeed impenetrable.

It was upon this meadow on Lasota Hill that one of the most powerful scenes from Schindler’s List was filmed, in which Schindler (played by Liam Neeson) and his wife are on horseback when they stop on Lasota Hill and witness the horror taking place during a Nazi round-up in the Jewish Ghetto below. This scene serves as a turning point in the film for Schindler’s character as he focuses in on the ‘girl in the red coat’ - the otherwise black and white film’s most powerful visual device.

Though in summer the trees are a bit too lush, in winter Lasota Hill indeed offers views of Podgórze, Kazimierz and the Old Town from its ridge. Look away from the centre and you’ll see Krakus Mound looming in the distance; actually closer than it looks, you’re only about a 20min walk away and the effort is worth it. Alternatively, follow the trail east between the church and fortress and you’ll find the Old Podgórze Cemetery across from the playground of a public school on whose property a segment of the original Ghetto Wall still stands.

Lasota Hill
/krakow/st-benedicts-church_49801v
Take any of the dark, daunting trails off ul. Rękawka into the wooded limestone cliffs of Krzemionki to discover one of Kraków's oldest, smallest and most mysterious churches in the clearing next to
see more