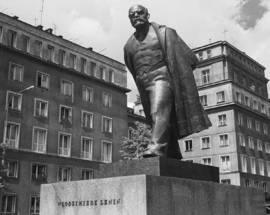 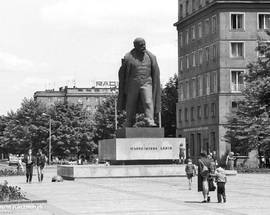 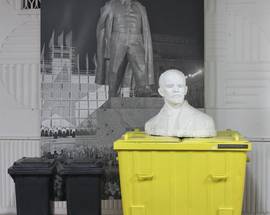 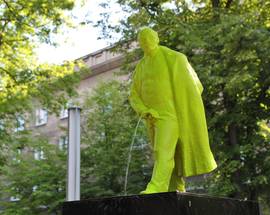 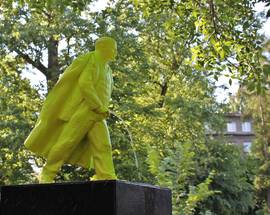 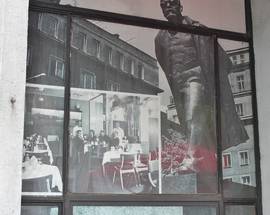 While Kraków’s regal associations are common knowledge, it’s easy to remain ignorant of its connections with communism, and specifically Vladimir Lenin (or Włodimierz Lenin, as he was known locally), who called the city home for two years before leaping to international notoriety.

Comrade Lenin arrived in Kraków on June 22, 1912 on the overnight train from Vienna, with his wife and mother-in-law in tow. Working as a freelance journalist for Russian papers like Pravda he took rented lodgings first on Krolowej Jadwigi, behind the Salwator tram terminus, and then at ul. Lubomirskiego 47. His favoured hangout was apparently the Noworolski Café in Kraków's Cloth Hall - a spot he often used to entertain both his wife and lover (egalitarian, but rather reckless in our opinion). One of Lenin’s great passions was ice skating, and he’d often be seen spinning deft moves on an ice rink which once stood close to the Botanical Gardens. In the warmer months he passed time cycling in Wolski Forest as well as taking romantic walks through the Błonia Meadow.

Summers were spent in Poronin, just outside Zakopane, where he would play chess and hang out with Polish heavyweight writers like Stanisław Witkiewicz and Stefan Żeromski. His reputation as a good-for-nothing finally caught up with him however, and on August 8th, 1914 he was arrested as an enemy of the state and imprisoned in Nowy Targ. Released days later he returned to Kraków to pack his bags and fled to Switzerland. Within years the show-off ice skater would become one of the most famous names in world history.

Memories of Lenin in Kraków

As an avid cyclist it is distinctly possible that during his two year sojourn in Kraków Lenin may have visited the area upon which Nowa Huta would later be built. He would make a high-profile postmortem return in 1954 when the Steelworks were named after him, and a year later his statue was unveiled in Strzelecki Park. The figure was moved to the Lenin Museum soon after, and later mysteriously disappeared. In 1970 the decision was taken to construct a new one on Al. Róż in the centre of Nowa Huta, with Marian Konieczny winning the commission.

Strangely, the artist was at that time actually living in Lenin’s former flat on ul. Lubomirskiego. Perhaps inspired by this freaky turn of fate Konieczny took three years to create the stunning seven tonne statue of Lenin striding purposefully forward down the district's main road with his raincoat open and brow furrowed. With the bloom well off the rose of socialism by that time and PL mired in an economic crisis, the citizens of Nowa Huta were unimpressed by Lenin's imposing statue, which soon became the focus of creative vandals. In one famous case a rusty old bicycle, battered pair of boots and a handwritten note were left below the statue which read, "Take these old boots, get on the bike and get the hell out of Nowa Huta." In 1979 a bomb was planted at his feet, though the only casualty proved to be a local man who died of shock after being awoken by the blast. During the Martial Law era more attempts to destroy Lenin's statue were thwarted, and it even survived an effort to pull it down, as well as an arson attack. Finally, on December 10, 1989, Lenin was picked up by a giant crane, boxed up and left to rot in a disused fort, until a Swedish philanthropist bought the monument for 100,000 Swedish crowns, and had it shipped to a museum outside of Stockholm.

In 2014, as part of the ArtBoom festival, a mock-up of the striding Lenin monument (created by Małgorzata and Bartosz Szydłowski) was again erected on Roses Avenue, with a few key differences: this one was a miniature neon yellow fountain of Lenin urinating. Many locals were outraged and it soon got moved to the Łaźnia Nowa Theatre, before disappearing completely.

For an overall look at life in Kraków under Lenin's gaze, visit the Nowa Huta Museum.