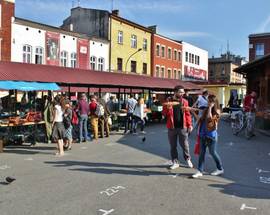 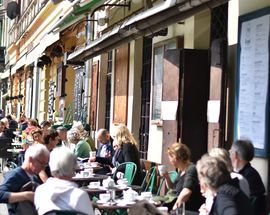 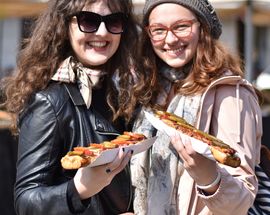 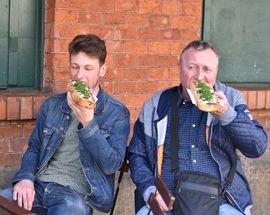 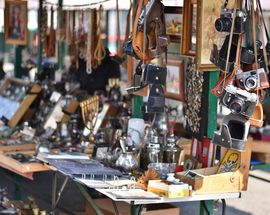 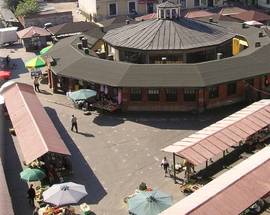 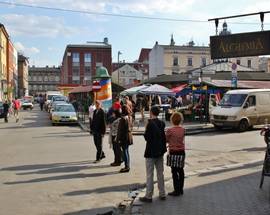 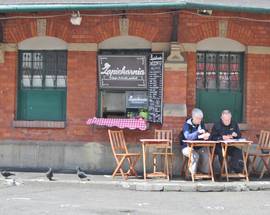 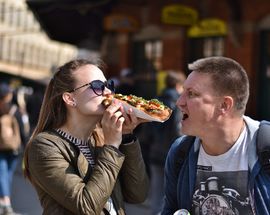 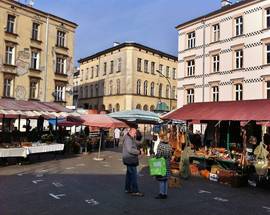 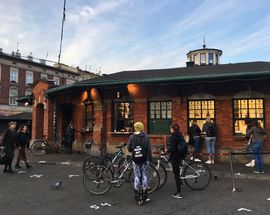 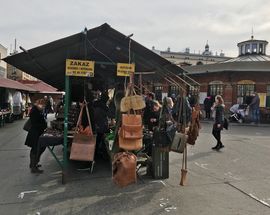 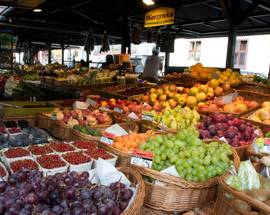 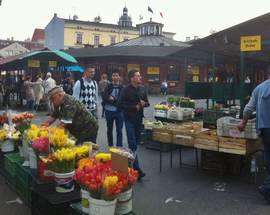 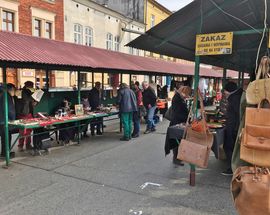 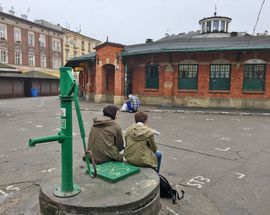 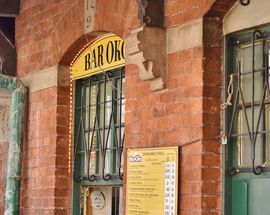 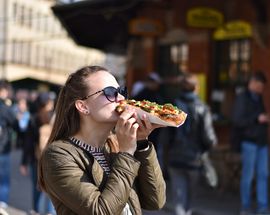 While Kraków’s main square, Rynek Główny, makes all the postcards and photographs, Plac Nowy has established itself as the spiritual centre of Cracovian subculture. Lacking the splendour of the Old Town, Plac Nowy is actually something of an eyesore – a concrete square filled with fast food hatches, metal market stalls and rat-like pigeons. If you want something completely different from the Old Town, however, here it is.


Incorporated into the Jewish quarter in the late 17th century, Plac Nowy (New Square) didn't really begin assuming its shape until the early 19th century, with its circular central landmark, the Okrąglak (rotunda), added as late as 1900. For generations this square was referred to by locals as Plac Żydowski (Jewish Square); not only was it the primary marketplace of the Jewish quarter, but the rotunda served as a ritual slaughterhouse for poultry right up until Nazi occupation. Outside, hungry locals line-up in front of the dozen or so hole-in-the-wall food hatches that operate around the rotunda late into the night (generally until 02:00), eager to taste arguably the best 'zapiekanki' in Poland. Essentially a French bread pizza with the toppings of your choice, you’ll find everyone from police blokes ignoring emergency calls on their walkie-talkies to stick-thin party girls getting their week's worth of calories waiting outside the rotunda for this legendary Cracovian street food. Visiting Kraków without eating a Plac Nowy zapiekanka would be like visiting Dublin without having a Guinness.
Merchant stalls surround the rotunda, and you’ll find somekind of open-air trade happening here daily from about 8:00 in the morning until as late as 20:00. Fresh produce, sweets and random rubbish are constant guarantees but weekly highlights include junk/antique sale Saturdays, Sunday's clothing market, and Friday morning's bewildering small critter expo/pigeon fair. A photo essay waiting to happen, arrive between 05:30 and 07:00 to the latter to learn the answer to the riddle, 'How many rabbits fit in a suitcase?'
As trade dries up for the day the area takes on a new guise: Kraków’s premier pub crawl circuit. Full of shambolic charm, veteran boozers Singer and Alchemia put Plac Nowy on the map for punters, and remain two of the square's best bets for candlelit, pre-war mystique, while the similarly dark and arty Mleczarnia down the road (ul. Meiselsa) boasts the city's best beer garden during the warm months. In more recent years the area has begun to diversify with glammy pre-club places like Le Scandale, but the fact of the matter remains that this bohemian outpost is one of Kraków's most interesting and exciting nightlife destinations.

Plans have been afoot to renovate this historic square for over a decade, with the controversial winning design long ago receiving a rubber-stamp. Shockingly, the numerous market stalls which have been a part of Plac Nowy since its beginnings would disappear, and a permanent stage would be installed. While the city has scored successes with similar revitalisation projects, there's nothing flaccid about the fizz of Plac Nowy and we're encouraged to hear that a lack of funds has delayed the start of the project indefinitely, while local resident initiatives have added potted trees and eliminated parking. As the square's future is still a bit up in the air, now is the time to soak up the bohemian atmosphere of the area, before it's all swanky cocktail bars and stupefying street performers.

ul. Estery 5
/krakow/alchemia_16640v
One of Kraków's most evocative bars, the aptly-named Alchemia perfectly captures the sepia candlelight, forgotten photographs and antique intrigues of the former Jewish district. A dim bohemian cafe by day, in the evenings Alchemia's murky mystique me
see more

ul. Meiselsa 24
/krakow/bistro-bazaar_155923v
Designed with a warm, vaguely industrial aesthetic, this bistro & bar à vin is one of the smartest locales on Plac Nowy. The focus is on the drink of the gods and everything that goes
see more

ul. Estery 14
/krakow/Krolicze-Oczy_16670v
Combining that quintessential Kazimierz aesthetic of tarnished beauty with a strange sense of sinister absurdity, spending too much time in this veteran boozer might have you feeling like you inhaled too much of the Joker's goofy gas. Creepy sepia portra
see more

Pl. Nowy 9
/krakow/le-scandale_20284v
Right on Plac Nowy (and outclassing most of the neighbourhood), Le Scandale unfolds over a series of sleek rooms draped with sultry ladies and sharp-dressed business sharks, before rev
see more

ul. Estery 8
/krakow/Mechanoff_16644v
Behind the copper-plated bar are any number of once cutting-edge, weird and wonderful contraptions which will have you guessing long into the night as to their original purpose. Not that you will mind spending time here: the music is the right side of le
see more

Pl. Nowy 4b/14
/krakow/Mini-Bar-Endzior_19875v
A zapiekanka from the roundhouse at Plac Nowy is a must for any visitor to Kraków and the patient cheapskates, tramps and drunks that make Endzior the longest queue in town would suggest that this is the best place to experience Poland's novelty stre
see more

Plac Nowy 8
/krakow/nowy-kraftowy_155914v
Walk though a completely unassuming doorway hidden in a corner of Plac Nowy (next to a strip club), and find yourself teleported to
see more

Pl. Nowy 1
/krakow/plac-nowy-1_128125v
Located in a new building buttressing Plac Nowy, we'll admit we initially disapproved of this project, but we never imagined it would be pulled off with this much elan. Adapted to its surroundings while subtly outclassing them, Plac Nowy 1 features a
see more

ul. Izaaka 1
/krakow/singer_16667v
One of the first bars in Kazimierz, Singer set the table for all that was to come, essentially inventing the evocative aesthetic of cracked mirrors, dusky paintings, rickety antiques and candlelight associated with the district today. Despite its long
see more

True the disappointment is abysmal just a shitty flea market with 5 stalls selling fake WWII stuff. Run away if looking for a flea market
12.09.2017
Paul
Reading, England
12/09/17 - A wonderful area for socialising and eating local cuisine after all the drinking!
30.10.2015
Lukas
Wadowice
One of the more underrated places in Krakow. The wonderful architecture and strategic location. In addition, the mass of clubs and pubs for everyone.
22.05.2012
Jim and Eve

Having visited Plac Nowy on numerous occasions im horrified to learn of the proposed renovation of this unique area hears hoping the lack of funds continues for some time to come.
Take your guide with you Download a pdf