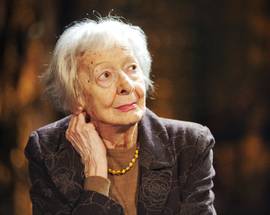 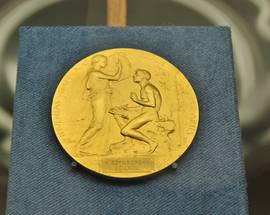 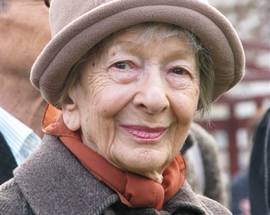 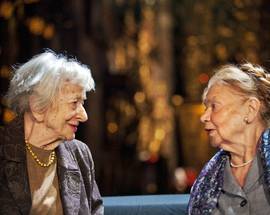 To borrow from the lady herself, “they say the first sentence…is always the hardest. Well, that one’s behind me, anyway.” So Wisława Szymborska began the most important speech of her life when she accepted the Nobel Prize for Literature in 1996. It was light-hearted moments like these that perhaps endeared the humble Polish poet to noted fans like Woody Allen. Although often playful and imaginative, Szymborska’s poetry is hardly light verse. Recurring themes of her work include war, torture, death and the passage of time, and though highly contemplative, she never manoeuvred away from the subject at hand.

Born outside Poznań in 1923, her family soon moved to Kraków where she would quietly spend the rest of her life. During Nazi occupation Szymborska secretly attended an underground secondary school and after the war studied literature and sociology at Jagiellonian University, dropping out before getting a degree due to financial problems. It was during this time that she first began publishing her poetry and had a short-lived six-year marriage with fellow poet Adam Włodek. Like many of her contemporaries, Szymborska’s early work adhered to official Soviet ideology and her first two collections – 1952’s Dlatego Żyjemy (What We Live For) and 1954’s Pytanie Zadawanie Sobie (Questions I Ask Myself) – later became known as her Stalinist period. By 1957 she had denounced her early work, and was later involved in the Solidarity movement to overthrow Poland’s communist government, writing under a pseudonym in the underground and foreign presses during martial law.


Throughout her modest career she worked for various Cracovian literary periodicals, publishing a regular column of book reviews and a slim volume of poetry every few years. It was enough to earn her acclaim and recognition in Poland, however she was virtually unknown abroad until 1996 when she was unexpectedly pulled from her shy, solitary life and awarded the Nobel Prize in Literature “for poetry that with ironic precision allows the historical and biological context to come to light in fragments of human reality.”

A perfect example of the inaccessible, esoteric and ambiguous language that turns the general public away from poetry, this explanatory commendation from the Nobel Board stands in contrast to Szymborska’s actual writing, which is known for its simple, straight-forward language. Her work quickly engages the reader, typically drawing them into an encounter with familiar, seemingly insignificant objects and events, but from a new perspective which reveals their harsh hidden truths or celebrates their unseen miraculous qualities. With trademark wit, wisdom and irony, her lyrical joy over life’s astonishing potential is tempered by strong skepticism in easy answers and an acute awareness of suffering. After its frivolous start, Szymborska’s Nobel acceptance speech went on to be considered one of the greats for its humourous description of the poet’s creative process and its earnest identification of that process’s responsibility to restlessly render every aspect of the world around us as nothing less than what Szymborska believed it to be: extraordinary. Despite almost universal critical acclaim and a surge in popularity, Szymborska was disturbed and embarrassed by her Nobel acknowledgement, and it apparently took her years to begin writing again. Today her reputation rests on a surprisingly small body of work comprising less than 250 poems. When asked why she had published so few poems she once retorted, “I have a trash can in my home.” A heavy smoker throughout her life, Wisława Szymborska died of lung cancer in that home on February 1st, 2012 at the age of 88. She is buried in Kraków’s Rakowicki Cemetery.

Poetry is notoriously difficult to translate, but translators Stanisław Barańczak and Clare Cavanagh did Wisława justice with their splendid work on View with a Grain of Sand and Here, winning a PEN Translation Prize in the process. Pick up View... to immerse yourself in the poet's lyrical and profound world, and keep an eye out for our favourite poem, Birthday.

If you're looking to connect with the lady through more than her words while in town, MOCAK currently has an exhibit in honour of the 10-year anniversary of her death (ongoing from Feb. 1, 2022), which reveals the writers artistic side via her collages, as well as a collection of  her personal effects since shortly after she passed away in 2012. The exhibit also includes her Nobel Prize medal, which is typically on display during the tour of Collegium Maius (where we assume it will eventually return).

If you're a total lovestruck admirer, lay some flowers on her rather modest grave in Rakowicki Cemetery; buried in her family plot, you can try to find it in section 'Gd' to the right of the main entrance between the main alley leading to the cemetery chapel and the 'Alley of the Distinguished' ('Aleja Zasłużonych').

Szymborska's connections to Kraków and literary legacy played a large role in the city being recognised as a UNESCO City of Literature. Follow the link to read more about Literary Kraków.

ul. Jagiellońska 15
featured
/krakow/collegium-maius_17110v
Jagiellonian University’s oldest building (and one of the oldest in Kraków), Collegium Maius was built as the university’s main campus in the l
see more
Featured
Cemeteries

ul. Rakowicka 26
/krakow/rakowicki-cemetery_57337v
Up until the end of the 18th century, all of Kraków's churches had their own cemeteries - a rather unsanitary situation which didn't change until the opening …
see more