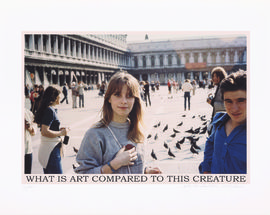 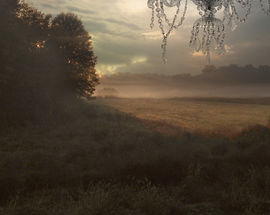 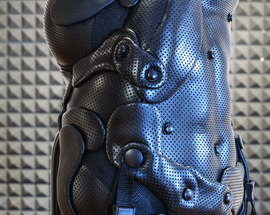 Contemporary art in Croatia is varied, challenging, and rests on deep avant-garde foundations.  Here are three artists who are particularly visible in 2019 and whose work can be seen in major museum collections.

Vlado Martek
One of the most mercurial and enigmatic figures in Croatian art, Martek (born 1951) is also one of the most iconic. He first started exhibiting in the 1970s, and ha exerted a powerful yet discreet influence over the art world ever since. Martekhas frequently used irony and mischief as a way of critically addressing the world around him, drawing attention to the absurdities of society through simple combinations of words and pictures. Often thought of as a visual poet, Martek was a literature graduate rather than a product of the art academy, and even today has a full-time job as a librarian. Most of is works involve written text – whether a fragment of poetry or a pithy saying. Many of the latter incorporate slogans and exhortations into pictures that look like childlike attempts to draw advertising billboards or propaganda posters. In the Seventies he was a member of the legendary Group of Six (Martek, MlaenStilinović, Sven Stilinović, FedorVučemilović, Boris Demur and ŽeljkoJerman) who were almost the guerilla artists of their day, exhibiting work in the streets, organizing public happenings, and producing works with the most simple of tools – a piece of paper and a crayon was more than enough.
Martekhas always been heavily influenced by the traditional 20th-century avant-garde: his work ČitajteMaljeviča (Read Malevich) is a reference to the famous Russian abstract painter of black squares and red circles.  Many Martek works deconstruct the world of graphic design, logos, commercial advertising and political messaging – one of the most famous examples is a map of the United States painted red and with the word ‘Balkan’ scrawled across it. The endlessly mercurial Martek is one of the most collectable Croatian artists in international circles. Summer 2019 sees a large retrospective of his work just an hour or so’s drive from Zagreb at Rijeka’s Museum of Modern and Contemporary Art (MMSU; www.mmsu.hr)

Mirjana Vodopija
Vodopija has been one of the most active and widely exhibited Croatian artists since graduating from Zagreb’s Academy of Fine Arts in 1987. She is also one of the most versatile, embracing painting, graphic art, installation, sound art and photography – a true multimedia artist who really is proficient in all media, and who frequently embraces the challenge of how to creatively mash them up. Her works reveal several enduring obsessions;movement, stillness, the natural environment and the natural rhythms of human life. Her 2013 video work Possibility was about walking off into a snowy landscape with no clear destination; while the 2017 installation Transition involved a toy car moving along a bendy-looking plank of wood between wall-mounted potted plants. Arguably her most talked-about show was 2013’s /Non-returnable/ in the HDLU, involving films of leaves, bits of paper and feathers from a torn pillow being picked up by the wind and re-deposited in a series of different patterns. Her exhibition this summer in Zagreb’sMuseum of Contemporary Art (www.msu.hr) is entitledWandering Landscape (Lutajućikrajolik) and presents a mixture of new and existing works examining the experience of space as something both liberating and confining. Images of plains, mountains and lakes are juxtaposed with those of building interiors in an attempt to question our perceptions of freedom and its limits.These surreal superimpositions are in part based on Vodopija’s childhood, and the fantastical stories told by her grandmother.

Kristian Kožul
There’s something distinctly unsettling about KristianKožul. His latest show at Zagreb’s Richter Pavilion (enigmatically entitled Sisyphus Exalted: Exercising Repetitions) looks likea cross between an operating theatre and an exercise gym. Incorporating metal, rubber and plastic, the ensemble of abstract sculptural forms seems to include bits of machinery and bits of human bodies, with no clear lines as to where the organic ends and the mechanical begins.
Born in 1975 and educated in the academies of Zagreb and Düsseldorf, Kožul’s early works were full of glitz and glam, his sculptural objects surfaced with shiny spangles, mirrors and beads. This dazzling flash of kitsch came with a disturbing undertow: what looked like a decorative take on folk art turned out to be a military helmet, or a human skull.
If the young Kožul’s work was loud and impossible to ignore, it was partly because it incorporated the high production values and showmanship of western art.Kožul’s work also shows the tireless attention to detail of the obsessive: for the 2012 exhibition Misinterpretations Kožulspent weeks constructing complex installations in his flat in southern Zagreb, rendering it totally uninhabitable in the process.He then photographed the results to create a series of enigmatic tableaux, illustrating the religious, political and consumerist obsessions of our times. After a relatively quiet period Kožul has returned to his horror-noir this-is-not-what-it-seems, best. His big 2018 show Forensic Folklore: The Archipelago created a highly decorative but also highly disconcerting garden of body parts and strange machines; something of a foretaste of this summer’s exhibition at the Richter Pavilion. What does it all add up to, you may ask? A deliciously dark and critical look at Croatia, the universe, and everything about the epoch in which we currently live.