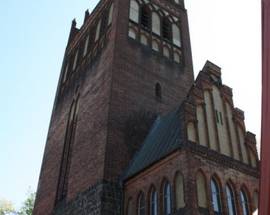 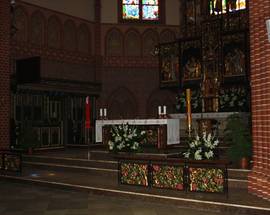 Built following a petition raised by the residents of Danzig-Langfuhr (Gdańsk Wrzeszcz) requesting the building of a Catholic church in the area. It was consecrated in April 1911 having taken under 2 years to build and was designed as a basilica with a rib-like structure over the naves and with a steeple reaching 66 metres. Günter Grass pilgrims will be interested to know that the author and his younger sister Waltraut were christened here.

Alas, within years all the original metal elements – bells and all - were commandeered by the military to produce things that go boom, and the church fared no better in the following war when it was smashed to bits by the advancing Soviets, which resulted in many of its records being destroyed (a problem for those searching for their roots in the neighbourhood). It has a rich, if tragic, ecclesiastical history; two consecutive parish priests from the 1920’s (Franciszek Rogaczewski and Bronisław Komorowski) perished in Stutthof Labour Camp and were later beatified, and the church also had the honour of being visited by Cardinal Wojtyła – you’ll know him better as Pope John Paul II.