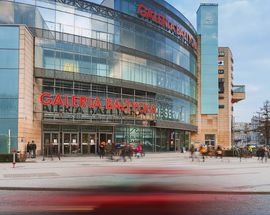 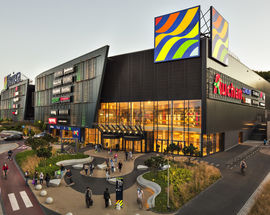 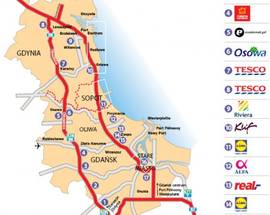 For most outsiders, Poland has long been associated with the stereotype of former Soviet-Bloc countries: a grey and miserable place with people queuing for basic goods. For sure, shopping options in the Tri-city have changed beyond recognition since the days in the late 1990s that Gdańsk In Your Pocket first rode into town. When the Tri-city's original 'western' mall, Klif, opened in Gdynia in 1996, Poles would more often visit to view than to buy – a reflection of the general lack of disposable income available at the time and the novelty value of huge shopping malls or superstores like IKEA or Carrefour. Like the rest of Poland, healing since the collapse of Communism in 1989 and embracing the EU in 2004, Klif has now evolved into the most upmarket shopping centre in the whole of Northern Poland! Over the last 30 years, countless international brands have made their way into the Polish food technology, food and fashion market and their outlets can be found all the major centres, includng the Tri-city. As tourism increases in the Baltic region of Europe, so too does the interest in Amber, a material of which Gdańsk is, by far, the biggest trading centre.

Shops have traditionally had more limited hours on weekends, but since 2018 government regulations have increasingly restricted Sunday trading in Poland to the point that there are now only 7 Sundays in the entire year when shops are allowed to be open. There are some exemptions from the ban, namely pharmacies, gas stations, kiosks, bakeries, open-air markets, Żabka convenience stores (most of which close at 23:00) and souvenir shops (oh thank god). Note that the Sunday hours we list for venues are the hours they keep only on those Sundays when trade is allowed.

If you're staying in the Old Town, your closest shopping centre is Galeria Madison, which you probably saw if you arrived via Gdańsk Główny train station. While this is the most central in Gdańsk and certainly has a huge amount of variety, by far the biggest in Tr-city is Galeria Bałtycka 4km north in Wrzeszcz. We would be hugely surprised if you couldn't find what you need there!

While Sopot's commercial scope does not reach the same heights as its neighbours do, Sopot Centrum is a decent little commercial centre with enough outlets to cover the bases. By now, we would've expected Sopot to have caved in to the pressures of its tourism market! On Plac Zdrojowy, however, you will find a sample of commercialism from a bygone era: a 3-storey, art-deco, mini department store called Walter. A tour around the Obwodnica (Tri-city Ring Road) will bring in the huge discount park which is Fashion House Outlet Centre as well as the huge hypermarkets of Carrefour, Auchan and Real.

Competing with Klif in Gdynia is the more-recent Centrum Riviera development, offering more to the middle-class residential area of Tri-city. In the very centre, on 10 Lutego, you will find the ship-shaped Batory Centre, which has a food court, coffee, some clothes shops, a book store and a pharmacy.

While you can find more information on them and how to get to them in our shopping section, we have put together a list of gift and souvenir suggestions, which might take a little more searching in order to find. Generally-speaking, however, shopping chains like Folkstar and Gdańsk's Galeria Sztuki Kaszubskiej are great for finding souvenir items with traditional Polish and Kashubian patterns.

Gdańsk is synonymous with Amber (also known as 'Baltic Gold') and, whilst you can find stalls all over Tri-city, your best bet is to head to ul. Mariacka in Gdańsk Old Town. Make sure you read up on how to make the best purchase!

Al. Zwycięstwa 256, Gdynia
featured
/gdansk/klif_20166v
Klif can be described as the Tri-city’s original shopping mall and continues to offer a choice of some of the highest quality brands in Poland. Covering over …
see more
Featured
Shopping Malls

Al. Grunwaldzka 141, Gdańsk
featured
/gdansk/galeria-baltycka_34572v
Gdańsk's most popular shopping mall can be found in the district of Wrzeszcz at the junction of the main Tri-city road (al. Grunwaldzka) and the main road t
see more
Featured
Shopping Malls

ul. Rajska 10, Gdańsk
featured
/gdansk/galeria-handlowa-madison_19631v
The Madison Shopping Gallery is found close to the main train station in the heart of Gdańsk and is the most centrally-located of all of Gdańsk's malls. …
see more
Featured
Shopping Malls

ul. Kołobrzeska 41C, Gdańsk (Przymorze)
/gdansk/alfa-centrum_18666v
Over eighty shops squeezed into 15,550m2 of retail space. Operating since 2000 they double as an impressive entertainment complex with multiplex cinema and a …
see more
Fashion & Accessories

ul. 10 Lutego 11, Gdynia
/gdansk/batory-shopping-centre_16285v
It should be no surprise that ship-shaped Batory centre is named after and inspired by the passenger ship that transported Poles to and from New York, USA from …
see more