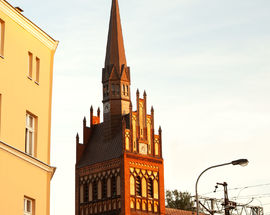 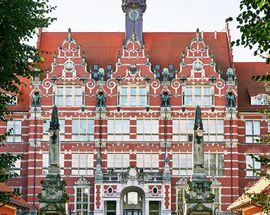 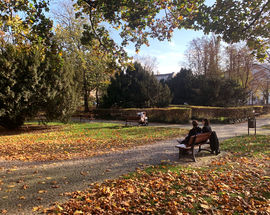 Arriving to discover that you have three cities to visit instead of the one written on your air ticket might be daunting enough. But for the intrepid among you who like to get out and really see the city off the typical tourist trail, Gdańsk has a few districts which are worth further exploration. Around 4km north of Gdańsk's Old Town, straight along al. Zwycięstwa (Victory Avenue), you’ll find yourself in the heart of Wrzeszcz. After decades of neglect Wrzeszcz is truly on the up and is these days far more of a commercial centre than the centre of Gdańsk itself. This is where you’ll find the biggest shopping mall in Gdańsk (found in a 'Wrzeszcz Triangle' with two other smaller nearby shopping malls), a rapidly expanding, modern, business district, the home of Gdańsk University, the city’s newest large concert venue as well as 50,000 residents. While nowhere near as picturesque as Gdańsk old town, the area is not without its attractions and points of interest. Impossible to escape in this area are the students - it’s their youthful presence that can be thanked for the growing number of cafes, bars and restaurants. This is an area worth exploring if you feel like getting away from the madding crowds of the historic centre.

The first thing that stands out about Wrzeszcz (pronounced v-zeh-sh-ch) is the name – surely a word with that many ‘z’s and so few vowels can’t be spelt correctly? Granted it was easier to pronounce when it was known by the German Langfuhr, but the name actually comes from the Polish word ‘wrzos’ meaning heather.
First written mention of the area dates to 1261 when a settlement known as Vrieszt was to be found here. In 1412 the district was awarded to Gerd von der Beke, an ally of the Teutonic Knights, before moving into the hands of the Bischof family in the second half of the 16th century. By the 17th century local tycoon Zachariasz Zappio had acquired much of the property between what is today ul. Do Studzienki and ul. Słowackiego, building a palace there that proved grand enough for Polish king Jan III Sobieski to stay in back in 1677. It’s for this reason you’ll find nearby streets with regal connotations (Dolina Królewska - Royal Valley, and Królewski Potok - Royal Brook). You won’t find remains of the residence anymore, though one legacy of the past that survives to this day is the profusion of linden trees. It was the Bürgermeister Daniel Gralath who can claim credit for this, having commissioned the planting of four lanes of linden trees over a two-kilometre stretch flanking the main high-street. The project, which was realized between 1767 and 1770, set him back 100,000 guldens, which we can assume is a very large amount of money! But the glory days were yet to come. The 18th century saw intense construction occur, most notably the Kuźnicki Manor House, complete with rooftop gardens touting footbridges, ponds and exotic plants. Wrzeszcz was becoming a fashionable area for those with cash to spare. In 1872, a tramline connecting the district to Gdańsk was added, while the early 20th century saw the construction of the Technische Hochschule (today Gdańsk Polytechnic) and the municipal hospital (now the medical academy).

During the Free City of Danzig days Wrzeszcz’s population soared to 40,000 and it continued to serve as a home to the middle-classes, as well as unit of Prussian ‘Hussars of Death’. It was during this period that Nobel-prize winning writer Günter Grass was born here. His work was often based on the Langfuhr and Danzig of his childhood and his most famous work, The Tin Drum, is set in the district around the time he was growing up.

The outbreak of WWII saw the main thoroughfare, today al. Grunwaldzka, re-christened to Adolf Hitlerstrasse, and while central Gdańsk was flattened by the end of the war, Wrzeszcz escaped lightly in comparison.

The post-war years, however, saw Wrzeszcz gradually slip into obscurity, its once-grand houses left to rot. Today, while you'll see many neglected older buildings, there are streets such as ul. Wajdeloty that are being returned to their former glories thanks to public investment and the arrival of a younger, professional class attracted by the area's increasingly-trendy reputation.

What to see in Wrzeszcz

Modern day Wrzeszcz is effectively split into two by the main Gdansk-Gdynia railtrack and road. To the south you have old Wrzeszcz, birthplace of Günter Grass, and now an upcoming residential district with some cool bars and eateries. We'd recommend starting your visit by following in the footsteps of Günter Grass, which will give you the opportunity to see some of the old streets and get a sense of the pre-war Langfuhr. One key point of interest, not just for fans of the author, is the Sacred Heart of Jesus Church (on ul. Księdza Zator-Przytockiego), while staying with the religious theme there’s also the New Synagogue, one of the few remaining signs of Jewish history in the city. There is also Kuźnicki Park, which has beneftited greatly from the area's transformation. To the north you have Galeria Baltycka shopping mall with its comprehensive range of big-name stores. The crowning glory of the area, however, is the revamped early 20th-century garrison buildings, which formerly belonged to the German Leibhusaren Brigade (Hussars). Today, it is aptly called 'Garnizon', consisting of modernised brick buildings now used for cafes, bars, restaurants and concert venues, making this a fairly lively part of the area. The flow of students around Wrzeszcz is fairly steady, therefore, for cut-price alcoholic adventures, we suggest readers hit one of the student clubs situated on the end of ul. Do Studzienki.

What to See & Do in Gdańsk Wrzeszcz

ul. Słowackiego 23, Gdańsk
EDITOR'S PICK
/gdansk/stary-manez-browar-vrest_148252v
While your main reason for visiting Stary Maneż in the Garnizon complex will be to see a performance in the main hall, it doesn't ha
see more
Editor's pick
Operas

Al. Zwycięstwa 15, Gdańsk
featured
/gdansk/baltic-opera-in-gdansk_20099v
The Baltic Opera in Gdańsk is the largest local cultural institution in Pomeranian, presenting outstanding works of opera and the art of ballet to the city …
see more
Featured
Shopping Malls

Al. Grunwaldzka 141, Gdańsk
featured
/gdansk/galeria-baltycka_34572v
Gdańsk's most popular shopping gallery can be found in the district of Wrzeszcz at the junction of the main Tri-city road (al. Grunwaldzka) and the main roa
see more
Featured
Wrzeszcz

/gdansk/getting-to-wrzeszcz_161563v
Getting to Wrzeszcz is very straightforward. It is found 4km north along the main Gdańsk – Sopot – Gdynia road (known at the Gdańsk end as Al. Zwycięstwa or …
see more
Places of Interest

ul. Partyzantów 7, Gdańsk
/gdansk/new-synagogue_31982v
Built in 1927 by the Berlin architects Imberg and Friedman and opened formally with the bringing in of the Torah on September 25 of the same year, Gdańsk's New …
see more
Asian Restaurants in Gdańsk

ul. Słowackiego 21, Gdańsk
/gdansk/ping-pong_148246v
Another reason to stop by the Garnizon development is this cool Asian venue which offers a selection of well-prepared and tasty Far Eastern favourites such as …
see more
Pizza

ul. Dmowskiego 15, Gdańsk
/gdansk/tutam_163623v
Centred around their pride-and-joy, a fantastic, white-mosaïc, woodfire pizza oven, Tutam is by far the best pizzeria in Wrzeszcz. Each pizza is a prepared …
see more
Churches

Church of the Sacred Heart of Jesus

ul. ks. Józefa Zator Przytockiego 3, Gdańsk Wrzeszcz
/gdansk/church-of-the-sacred-heart-of-jesus_39944v
Built following a petition raised by the residents of Danzig-Langfuhr (Gdańsk Wrzeszcz) requesting the building of a Catholic church in the area. It was …
see more
Ice Cream

ul. Stanisława Wyspiańskiego 22, Gdańsk
/gdansk/eskimo_127354v
Probably the only real 'old-school' ice cream place in town. Using a serving system and in surroundings that will give you a picture of the communist People’s …
see more
Monuments

ul. Jaśkowa Dolina, Gdańsk
/gdansk/johannes-gutenberg-statue_127386v
In addition to the Günter Grass tour, and the various sights we’ve listed, one complete oddity to view can be found up the hill in the forest just across from …
see more
Monuments

Skwer Anny Walentynowicz
/gdansk/anna-walentynowicz-monument_138468v
This monument to the Solidarity activist whose dismissal from the Lenin Shipyards on August 8, 1980 sparked the
see more
Vegetarian Restaurants Gdańsk

ul. Wajdeloty 25/1, Gdańsk
/gdansk/avocado-vegan-bistro_138478v
A highly-recommended vegan restaurant on ul. Wajdeloty, which serves up dishes which are not only healthy and wholesome but also look and taste great. You …
see more
Monuments

Al. Zwycięstwa, Gdansk
/gdansk/daniel-gralath-monument_148263v
Connecting the main town of Gdansk and the district of Wrzeszcz to the north is the handsome Al. Zwycięstwa (Victory Avenue). Lined with hundreds of linden …
see more
Places of Interest

Szubieniczna Góra
/gdansk/szubieniczna-gora_161763v
The hill directly behind the Gdańsk University of Technology is rather ominously named, the English translation being 'Gallows Hill
see more
International

ul. Hemara 1, Gdańsk
/gdansk/eliksir_144440v
This is visually very impressive, set as it is in the re-modelled 19th-century building, which formerly housed the Garrison Commandant, and there’s clearly …
see more
International

ul. Słowackiego 21, Gdańsk
/gdansk/pobite-gary_149635v
There are certain things which get the alarm bells ringing whenever we visit a new place yet while Pobite Gary checked off three of these, we were pretty …
see more
Cafes

ul. Wajdeloty 22, Gdańsk
/gdansk/fukafe_163600v
There are many great options for coffee, cake and even a beer on ul. Wajdeloty. However, we and many other people tend to rave the loudest about all the …
see more
Places of Interest

ul. Narutowicza 11/12, Gdańsk
/gdansk/gdansk-university-of-technology_40065v
This impressive building was built as a technical university (German: Technische Hochschule) by the Germans between 1900 and 1904 as Danzig was an important …
see more
Streets & Squares

ul. Wajdeloty, Gdańsk
/gdansk/ul-wajdeloty_127347v
For many years the district of Wrzeszcz remained rather rundown with families having to live in poor conditions with shared toilet facilities, a fact which …
see more
Cafes

ul. J. Słowackiego 19, Gdańsk
/gdansk/sztuka-wyboru_144433v
Translating as 'The Art of Choice' in English, Sztuka Wyboru is more than just a great café - it's a cultural institution! Found in the main building at the …
see more