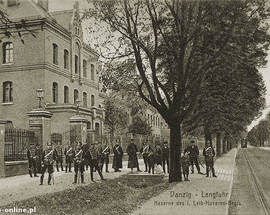 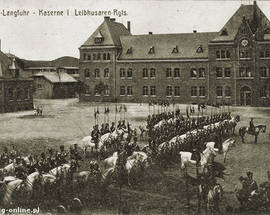 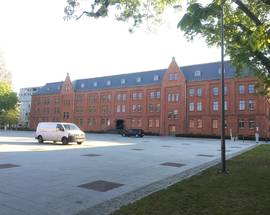 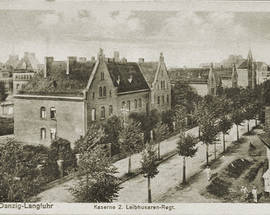 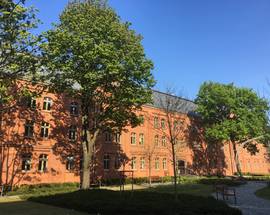 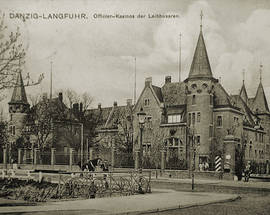 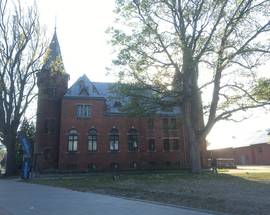 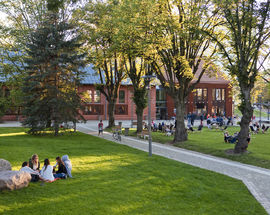 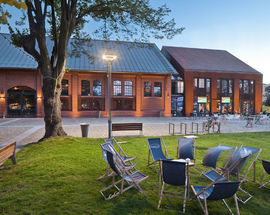 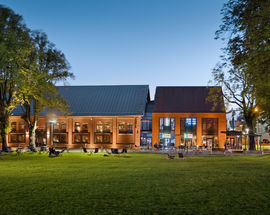 In another example of the continuing revitalization of the Gdańsk district of Wrzeszcz, what for many years was a closed military zone is being redeveloped for public use. The Garnizon (Garrison) district, close to the main road between the airport and the city, is gradually being turned into a residential and entertainment district.

The area was originally developed at the beginning of the 20th century as a home for the German Leibhusaren Brigade (Hussar Brigade), which included the 2nd Hussar Regiment Queen Victoria of Prussia, notable for being named in honour of the daughter of Britain’s Queen Victoria, wife of German Kaiser Friedrich III and whose emblem was the skull and crossbones which gained them the popular name of the ‘Death’s Head Hussars’. Home at one stage to nearly 2,000 men, the garrison (then on what was called Hochstrieß in Langfuhr) was taken over by the Free City of Danzig police force following Germany’s defeat in WWI and then in turn by the Polish army following WWII (Hochstrieß is now Al. Żołnierzy Wyklętych).

The area had fallen into decline until the ambitious re-development began which has seen 10 of the old red brick buildings modernised and gradually being turned over to new uses such as cafes and restaurants, a concert venue, offices, hotel and eventually a cinema and theatre. The bulk of the development consists of modern offices and apartments, the whole area being a blend of old red brick buildings and modern architecture to raise an eyebrow, and it has done well with its initial promises to breathe new life into a square of land that has lain empty for years. Definitely worth checking out.

Your main reasons to visit are the Stary Maneż, a great concert venue which attracts some top international names; the Browar Spółdzielczy (Cooperative Brewery), a Multi-tap bar; the Blok Fit climbing walls or any of the new restaurants and cafes which have sprung up, of which Sztuka Wyboru, Lula, Eliksir, Kucharia, Ping Pong and Pobite Gary and have already all impressed.

The old buildings particularly worth looking out for are the former officers’ mess at the Galeria Bałtycka end of Al. Żołnierzy Wyklętych (set to become a theatre); the Stary Maneż restaurant and concert venue, which was formerly the Manège (French for riding academy, apparently) and the beautifully modernised building which today houses the Elixir bar/restaurant, the building which formerly was home to the garrison's commanding officer.

Places to check out in Garnizon area of Wrzeszcz

ul. Słowackiego 23, Gdańsk
EDITOR'S PICK
/gdansk/stary-manez-browar-vrest_148252v
While your main reason for visiting Stary Maneż in the Garnizon complex will be to see a performance in the main hall, it doesn't ha
see more
Editor's pick
Shopping Malls

Al. Grunwaldzka 141, Gdańsk
featured
/gdansk/galeria-baltycka_34572v
Gdańsk's most popular shopping mall can be found in the district of Wrzeszcz at the junction of the main Tri-city road (al. Grunwaldzka) and the main road t
see more
Featured
Asian Restaurants in Gdańsk

ul. Słowackiego 21, Gdańsk
/gdansk/ping-pong_148246v
Another reason to stop by the Garnizon development is this cool Asian venue which offers a selection of well-prepared and tasty Far Eastern favourites such as …
see more
Cafes

ul. J. Słowackiego 19, Gdańsk
/gdansk/sztuka-wyboru_144433v
Translating as 'The Art of Choice' in English, Sztuka Wyboru is more than just a great café - it's a cultural institution! Found in the main building at the …
see more
Polish Restaurants in Gdańsk

ul. Słowackiego 21, Gdańsk
/gdansk/pobite-gary_149635v
There are certain things which get the alarm bells ringing whenever we visit a new place; though Pobite Gary checked off three of these, we were pretty …
see more
Wrzeszcz

/gdansk/getting-to-wrzeszcz_161563v
Getting to Wrzeszcz is very straightforward. It is found 4km north along the main Gdańsk – Sopot – Gdynia road (known at the Gdańsk end as Al. Zwycięstwa or …
see more
Bars & Pubs

Al. Grunwaldzka 190, Gdańsk
/gdansk/browar-spoldzielczy_144439v
A hard to find multi-tap pub found in the cellar of the old buildings tucked away on the far side of the Garnizon development, this is well-worth a stop on a …
see more
International

ul. Hemara 1, Gdańsk
/gdansk/eliksir_144440v
This is visually very impressive, set as it is in the re-modelled 19th-century building, which formerly housed the Garrison Commandant, and there’s clearly …
see more