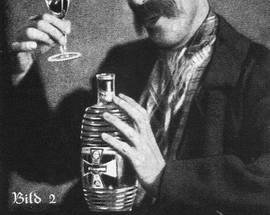 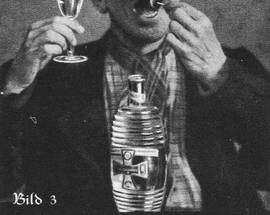 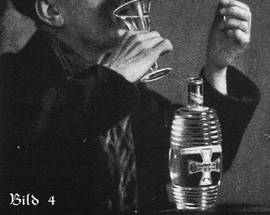 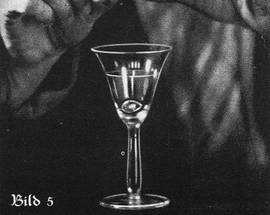 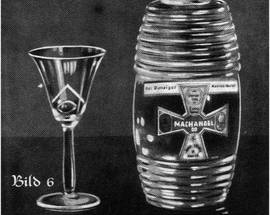 A German restaurateur living in Gdańsk has revived a bygone local brew and by doing so has recovered one of the many lost cultural traditions of Gdańsk/Danzig.

Machandel, once described as the State Drink of Danzig, is a juniper based alcoholic drink with a smooth taste and firm kick.

Originally produced by the Stobbe family in the nearby town of Tiegenhof (now Nowy Dwór Gdański, just west of Elbląg) Machandel had been out of production since the distillery stopped working towards the end of WWII. Now produced by a distillery in Germany and available in Gdańsk in the Goldwasser restaurant, Bistro Goldwasser, Targ Rybny and Gdanski Bowke restaurants, part of the pleasure of drinking Machandel is the ritualistic way in which it’s done. As well as being enjoyed neat, the typical way Machandel was drunk was with the aid of a dried plum.

The accompanying pictures explaining the dried plum ritual are from a series of humorous pre-war postcards featuring a much-loved actor from the National State Theatre of Danzig, Gustav Nord. The main points are that a dried plum should be placed in a chilled glass, equally cold Machandel poured over it, the dried plum removed with the stick and eaten and the Machandel knocked back in one. Finally the stick is snapped in two and placed inside the glass. Failure to do this carries a fine of buying the next round. Other variations on this theme exist, all of them coming with their own penalty.

The other Machandel talking point is the bottle it comes in. Reminiscent of the little wooden barrels local farm workers used to take to the fields with them along with their usual quota of cheese, bread and ham.
Fish

ul. Targ Rybny 6C, Gdańsk
/gdansk/targ-rybny-fishmarkt_19775v
Without a doubt, one of the best restaurants in Old Town. Targ Rybny Fishmarkt is a visual delight from the moment you enter, with cosy sailboat interio
see more
International

ul. Długie Pobrzeże 22, Gdańsk
/gdansk/goldwasser-restaurant_15965v
Still one of our favourite places and one of the best places to take guests in Gdansk, this atmospheric riverside restaurant features dishes like duck, fresh …
see more
Cafes

Al. Niepodległości 737, Sopot
featured
/gdansk/sopot-737-lentre-villes-restaurant_132565v
A truly stunning venue with a menu and service to match. Found in an early 20th-century villa, the place oozes class with a modern look that embraces the …
see more
Featured
Mid-range

ul. Długie Pobrzeże 22, Gdańsk
featured
/gdansk/kamienica-goldwasser_15858v
A series of modernised suites overlooking the river, feet from Żuraw (The Crane), the city’s landmark. Most come with a bedroom, living room and bathroom which …
see more
Featured
Polish

ul. Długie Pobrzeże 11, Gdańsk
/gdansk/gdanski-bowke_104966v
First off – Gdanski Bowke? What is it? Well, there’s a dummy outside showing a typical ‘Bówka’ (singular) who could be found cruising the waterfront before the …
see more