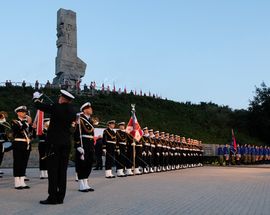 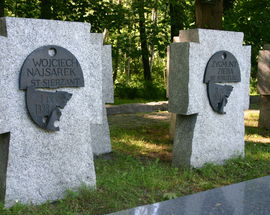 A large protective peninsula shielding Gdańsk's Nowy Port to its south, Westerplatte achieved infamy as the military zone where the opening shots of WWII were exchanged and would begin the conflict that would claim an estimated 70 to 85 million lives and profoundly shaped the world as we see it today. Today, Westerplatte is one of the most popular tourist sites in Gdańsk and Poland and an essential visit for those with that eternal fascination with World War Two.

Prior to 1939, however, most people who knew the name Westerplatte had a very different association with the area. In 1830, much like neighbouring Sopot, the peninsula was developed as a health resort in the mid-19th century and was a popular spot for Danziger beachgoers. On March 14, 1924 Poland was awarded Westerplatte as a location for bringing in military equipment and ammunition from abroad (Polish Military Transit Depot). Inaugurated on November 11, 1925 over the next 14 years Westerplatte grew from a depot with an 88-man attachment into a huge defensive fort and was considered so strategically important to Hitler that his invasion of Poland effectively started here.

The Polish troops on Westerplatte were in effect a crack unit, by now numbering around 200 troops, whose orders were to hold for 24 hours in the event of an attack to give air, ground and sea forces the opportunity to support them from mainland Poland. The speed and strength of the German attack put paid to that plan almost immediately with the Polish navy caught out in the Bay of Gdańsk and the bulk of the air support from Puck destroyed on the ground.

Yet the troops on Westerplatte continued to hold out despite coming under intense bombardment by air, sea and 3,500 troops on the ground. The hope was that France and Great Britain, who joined the war on September 3, would provide support but this never materialised.

Eventually, on September 7, lack of water, ammunition and medical supplies convinced the commanding officer, Major Henryk Sucharski, to surrender the Poles’ heavily damaged stronghold. He and his troops left Westerplatte to salutes from their captors in recognition of their bravery in a battle that had cost just 15 Polish lives.

The battle, while of little strategic importance to the outcome of the battle for the city, still represents a source of immense pride for many Poles who recognise the bravery of their countrymen in their resistance to one of the country's traditional foes.

What to see on Westerplatte?

Today, Westerplatte is a historical park and memorial site featuring a scattering of shelled bunkers, burnt-out ruins, snack bars, souvenir stalls and a small seasonal museum in the pivotal Guardhouse Number 1. There is also a permanent outdoor exhibition entitled 'Westerplatte: Spa-Bastion-Symbol' on display. Note: Many of these museums are closed in the off-season.

How to get to Westerplatte?

To get to Westerplatte on public transport from the main train station in Gdańsk, catch bus 106 from outside of the station. During the summer months, the easiest way to get out there is to take the Water Tram F5 which stops outside the Hilton Hotel at Targ Rybny and goes directly to Westerplatte and back.

Places to See on Westerplatte

ul. Sucharskiego 70, Gdańsk
EDITOR'S PICK
/gdansk/gdansk-westerplatte-ferry-port_39489v
Polferries from Nynashamn, 60km south of Stockholm, arrive at Gdansk's Westerplatte (after years of docking on the opposite side of the waterway at Gdańsk’s …
see more
Editor's pick
Monuments

Statue to the Defenders of Westerplatte

ul. Sucharskiego, Gdańsk
featured
/gdansk/statue-to-the-defenders-of-westerplatte_39528v
In the southwest corner of the peninsula is a huge, 25-metre monument made of 236 granite blocks. The work of the architect Adam Haupt and sculptor Franciszek …
see more
Featured
Places of Interest

Majora Henryka Sucharskiego 70, Gdańsk
/gdansk/guardhouse-number-1_31811v
A small museum on Westerplatte adding further colour to the events of September 1939, housed inside the former Guardhouse from which the strategic defence of …
see more
Places of Interest

ul. Przemysłowa 6A, Gdańsk
/gdansk/nowy-port-lighthouse_54585v
A fascinating delve into Gdańsk‘s maritime history, the city‘s Nowy Port Lighthouse was inspired by a long-lost lighthouse built in 1871 in Cleveland, Ohio, in …
see more
Museums

Westerplatte, Gdańsk
/gdansk/westerplatte-spa-bastion-symbol-exhibition_111495v
This is a permanent outdoor exhibition located on the Westerplatte, where World War II broke out. Split into four parts, the first shows the life of the …
see more