The Marc, Sandton Central Photo by Rich T / Shutterstock
share post a comment
Midway between Pretoria and Johannesburg, the steadily expanding area of Midrand is a relatively new addition to Gauteng’s landscape. In this edition of our series of guides to exploring Gauteng with the Gautrain, we take a look at the myriad attractions that you can easily reach from the Midrand Gautrain station.

Most famous for having one of the biggest malls on the continent, the epic Mall of Africa, there’s more to Midrand than just shopping. From the Sunday farmer’s market and a wealth of dining destinations, to the biggest mosque in the southern hemisphere, here’s a look at some major attractions to plan a day trip around.

Making the most of Midrand


Only a few decades ago Midrand was all farmland. The first office blocks and residential properties were only built here in 1981. The region has steadily grown since, particularly over the last decade with the huge expansion of the Waterfall development which encompases residential estates complemented by new malls, flashy corporate headquarters and conference centres, schools, hotels and even a hospital.

The Midrand station is on Pretoria Main Road in close striking distance of key business destinations such as the Gallagher Convention Centre. As the train draws into the station you can’t miss the immense Turkish Nizamiye mosque complex, a beautiful sight to behold both inside and out.

While the shops of Mall of Africa are for many Gautengers Midrand’s biggest attraction, it’s extremely easy to get here with the Gautrain and take in some other pastimes beyond shopping too.

Getting around from Midrand station

As the Mall of Africa and the Waterfall business district that surrounds it is one of the biggest and busiest retail and business centres in this part of Gauteng, unlike other weekday-only Gautrain bus routes, the M4 Mall of Africa Gautrain bus runs every day from the station to Mall of Africa, passing by the Nizamiye mosque on the way. Another key bus route is the M3 Sunninghill Gautrain bus (weekdays only) which stops at other popular new lifestyle centres such as Waterfall Corner. 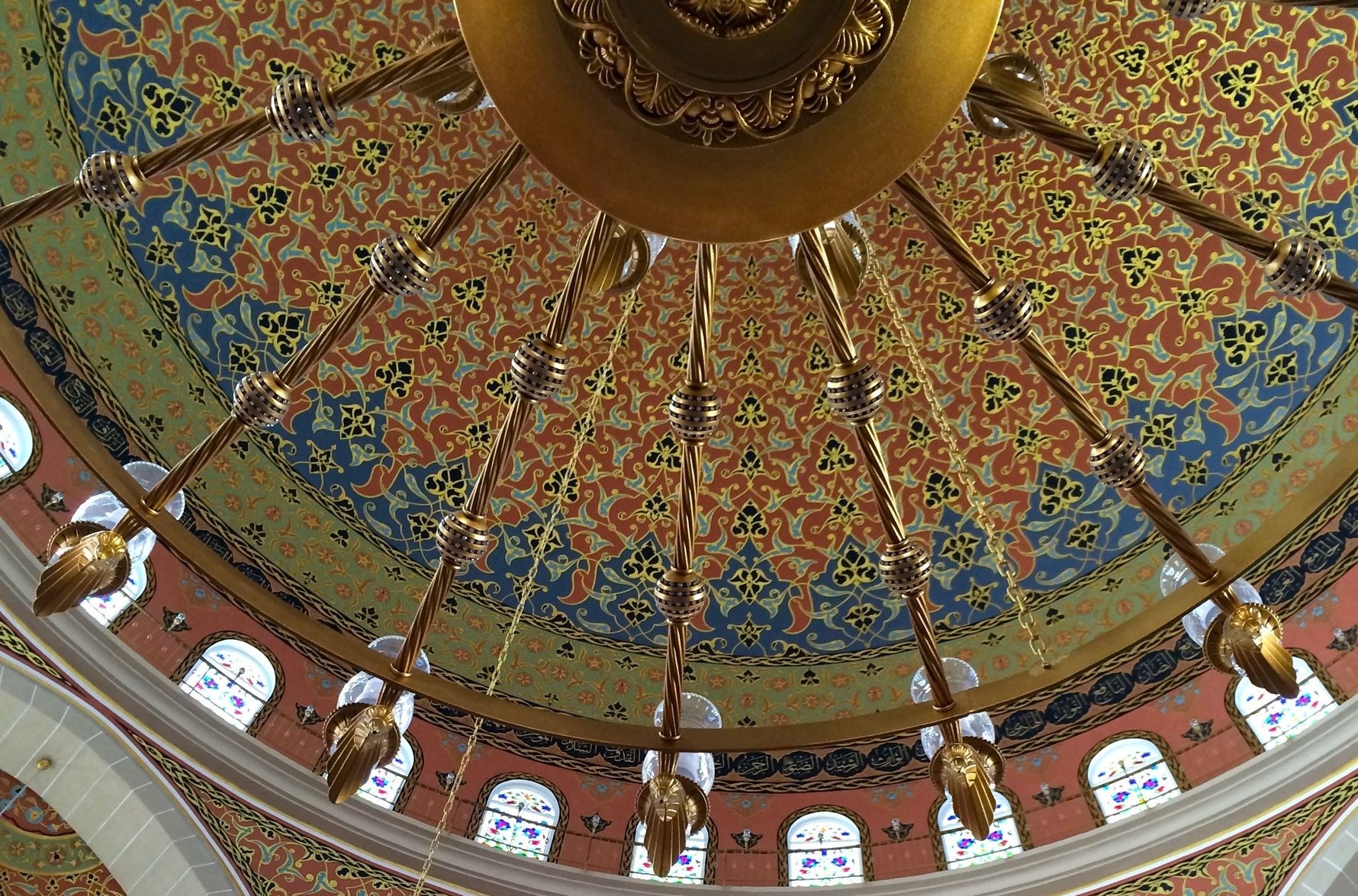 Modelled on the 16th-Century Ottoman Selimiye Camii mosque in Edirne, Turkey, the Nizamiye mosque is a most impressive place with an astonishing 21 domes, the insides of which were hand-painted in intricate detail by Turkish artisans, four soaring minarets and over 200 stained glass windows. Everywhere you look an incredible attention to detail is evident, whether it’s in the traditional hand-glazed Turkish tiles or the perfect symmetry of the grand main prayer hall with its beautiful chandeliers.

Within the Nizamiye mosque complex there is also a Turkish supermarket, bakery, bookshop and a carpet and ceramics store. After taking a tour of the mosque make sure to plan to leave time for Turkish delight and a traditional Turkish coffee at the Turkish bakery or a full lunch of sizzling kebabs, salads and the best hot breads at the Ottoman Palace restaurant.
From the Midrand station you can reach the mosque by taking the daily Mall of Africa Gautrain bus and getting off at the Dischem / Le Roux Avenue stop from where it’s about a 10-minute walk.

Shopping at Mall of Africa 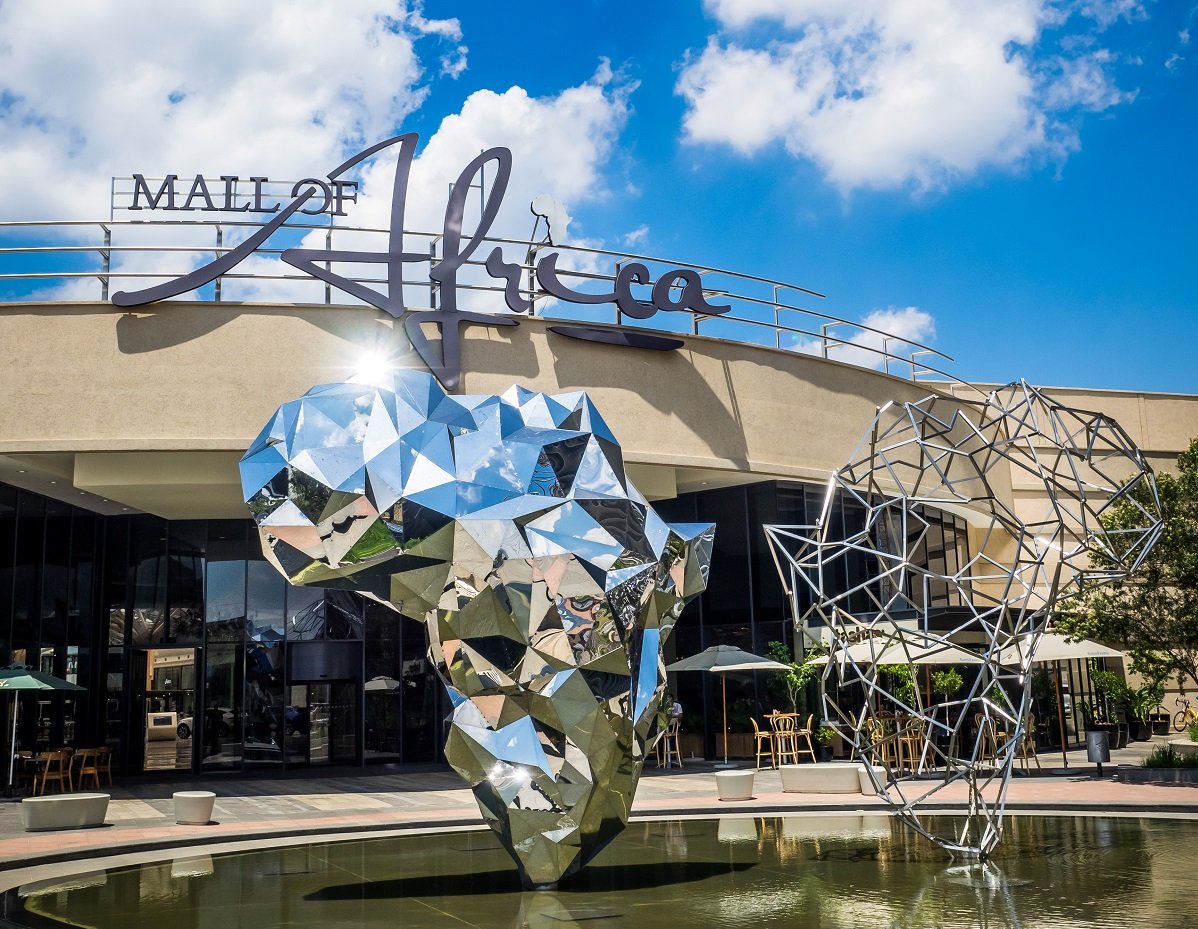 The immense Mall of Africa (which can be reached directly from the station on the Mall of Africa Gautrain bus) is home to more than 300 local and international brand-name stores and is a top shopping destination. You can find the impressive flagship stores of all the biggest brands, including top international designer labels like Versace and Armani, as well as some must-visit local designer brands such as Maxhosa by Laduma, a favourite of local and international celebrities.

There’s also an IMAX cinema, kids play areas and plenty of places to eat out on the attractive ‘Town Square’ piazza. Making this an especially popular attraction the park in front of the mall also hosts a regular programme of events such as concerts, festivals and antiques fairs.
From Midrand Gautrain station take the M4 Mall of Africa Gautrain bus directly to the mall (runs every day). 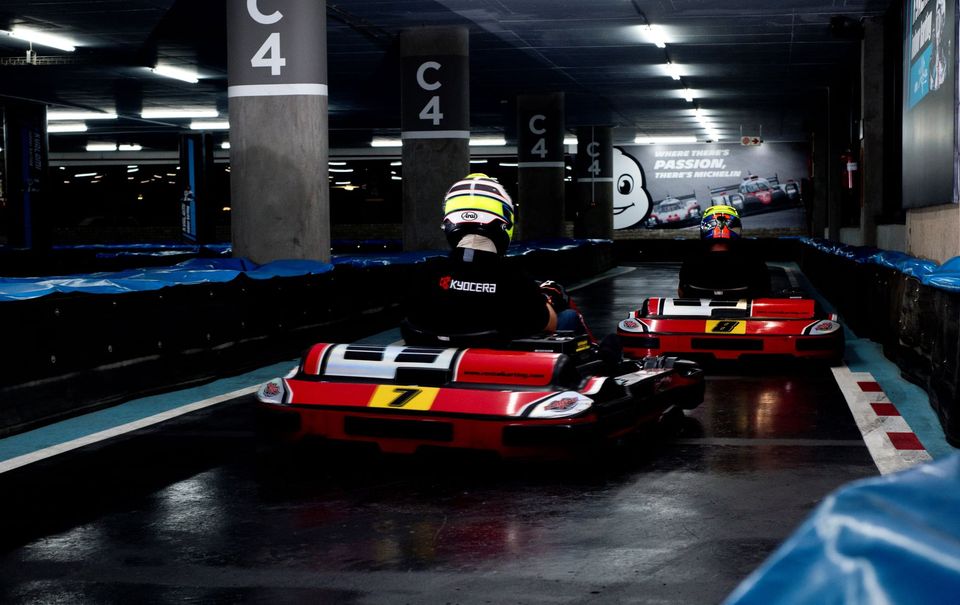 One of the most exciting attractions for anybody who loves racing is the Kyalami Indoor Karting track, also part of Mall of Africa. Designed by professional motorsports drivers it has real chicanes and pit stops and is perfect for teens who are bursting to get behind the wheel (strictly for over 12s only) or adults who want to let off some steam with a thrilling Grand Prix race around the track.

Waterfall Park and the Waterfall Market 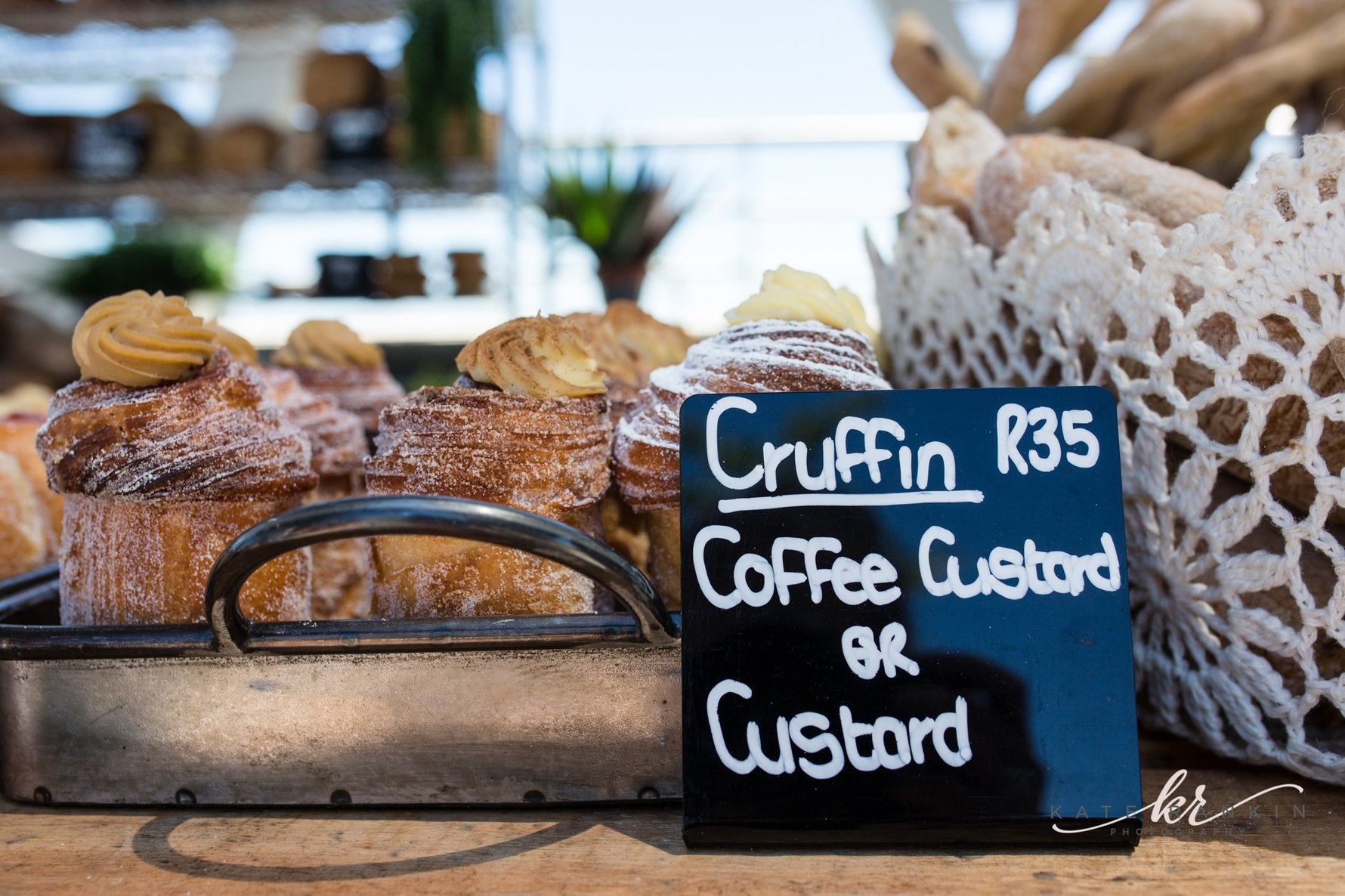 Adjacent to Mall of Africa is Waterfall Park, a large purpose-built park which has wide lawns, play areas and picnic benches for enjoying lunch in the sun. Every Sunday the park hosts the Waterfall Market, one of the most popular attractions in Midrand, known for its excellent collection of artisanal food stalls and family-friendly atmosphere.

Where to get lunch 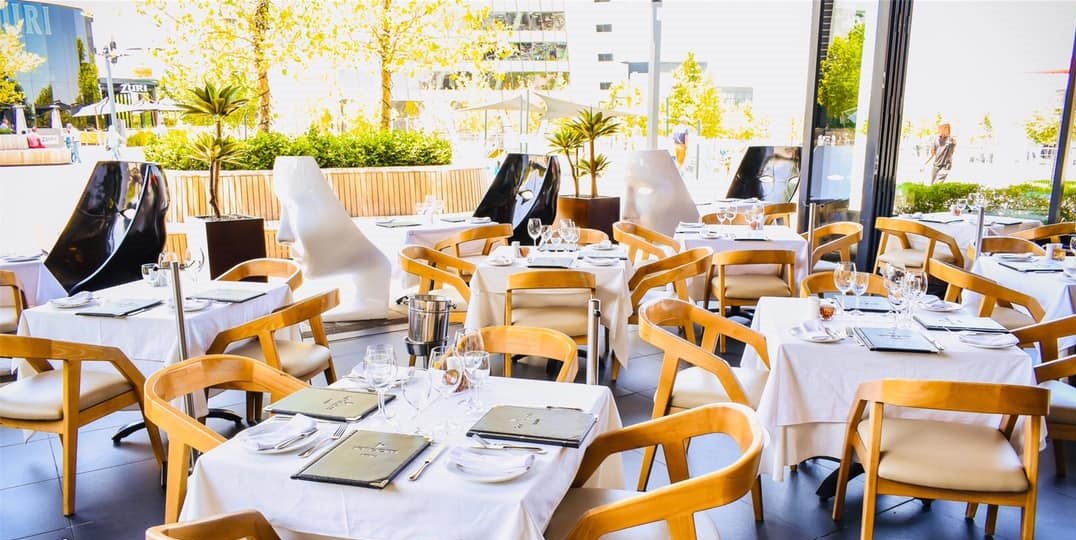 For breakfast, lunch or dinner outdoors the Mall of Africa has a large open-air piazza (called Town Square) lined with popular restaurants perfect for al fresco bistro dining including Life Grand Cafe, Kream, Casa Bella and sushi and grill restaurant Wasabi. On Sundays the Waterfall Market is a favourite lunch spot, especially if you bring a picnic blanket along and find a nice spot to relax in the park.

Alternatively for something different the Ottoman Palace restaurant at Nizamiye mosque is always memorable, especially for its grand interiors.

How to use the Gautrain

You can now pay for all your Gautrain trips using a contactless bank card by simply swiping in and out of the turnstiles at stations and tapping the contactless touchpoint on the bus when you enter. Alternatively, buy a Swift Card at the station and top it up to pay for your trips.

Download the Gautrain app for real-time updates on when the next Gautrain and Gautrain bus is due or check online at gautrain.co.za.