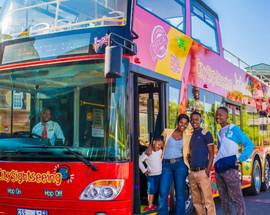 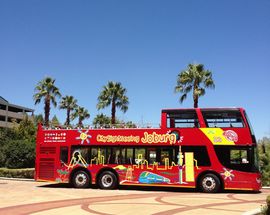 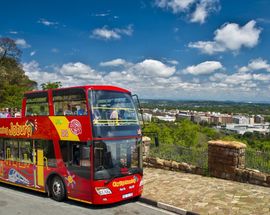 The open-top, hop-on hop-off red bus is a great way to zoom around many of the city's biggest sights in one day. You'll be accompanied by an insightful audio guide on the two-hour journey (the route without stops).

The Red Route takes a circular route around downtown Johannesburg and the south of the city starting at Constitution Hill and stopping at Gold Reef City theme park and Apartheid Museum in south Joburg. Helpful information and self-guided walking tour maps are available to help you make the most of your time at the different stops and many museums also offer discounted entry to City Sightseeing bus riders.

The Green Route which starts near The Zone@Rosebank winds its way through Joburg's historic leafy suburbs finishing at Constitution Hill (from where you can join the Red Route).

The Green Route stops along the way include the Joburg Zoo and Zoo Lake, and one at the extensive Ditsong Museum of Military History. Have your cameras ready for when the bus makes its way to the top of the ridge on Houghton's Munro Drive – the bus makes a brief stop at the most scenic viewpoint from where on a clear day you can see all the way out to the Magaliesberg mountains.

Guides will lead you to the Green Route bus stop from the City Sightseeing ticket office in Rosebank at The Zone@Rosebank and in peak seasons there are shuttle buses that connect with the major hotels in Sandton and Melrose Arch from the Rosebank stop.

Tickets are valid for both the routes and you can hop on and off as many times as you like. Make sure to bring sunscreen with you, and water to keep hydrated along the way.

TIMETABLE
On Mondays and Tuesdays the bus operates a limited service with a non-stop 'Scenic Tour' that takes in all the main sights combining the red and green routes (the tour last approximately two and a half hours starting and ending in Rosebank). From Wednesday to Sunday the full hop-on hop-off service operates.

1-day ticket from R239, kids from R145. Make sure to buy your tickets online to take advantage of seasonal discounts

Cnr Joubert St and Kotze St, Braamfontein
EDITOR'S PICK
/johannesburg/constitution-hill_122823v
The buildings of Constitution Hill in Braamfontein reveal the horrors of some of the darkest hours of 20th Century South Africa, while also showcasing the bright, optimistic future of the country enshrined in the modern Constitutional Court. The large
see more
Editor's pick

Cnr Northern Parkway and Data Crescent, Ormonde
/johannesburg/gold-reef-city-theme-park_123210v
The theme park is open Thu–Sun from 09:30 and on extended dates during school holidays. Tickets must be booked online in advance and cost R250 per person. Note that tickets are limited and can sell out,
see more

Jan Smuts Ave, Saxonwold
/johannesburg/johannesburg-zoo_123205v
Walk on the wild side on close to 54 hectares of protected land to view nearly 2000 animals at Johannesburg Zoo. Founded in 1904 in the pretty suburb of Saxonwold, the zoo offers plenty of picnic spots and the opportunity to see an impressive collecti
see more

120 De Korte St, Braamfontein
/johannesburg/protea-hotel-parktonian-all-suite_123262v
Once of the best kept secrets in the city is this hotel's rooftop (for guests only), offering breathtaking 360-degree views of the skyline from the pool deck and gym. The lobby is vast and the 300 suites are all one bedroom units. The buzzy Orchards Rest
see more

177 Oxford Rd, Rosebank
/johannesburg/the-zone-rosebank_123895v
With a Gautrain Station on its doorstep, Rosebank and its cluster of indoor and outdoor mall spaces is a popular weekend destination, especially with younger crowds, offering an African market, a choice of local fashion and international fashion labels,
see more