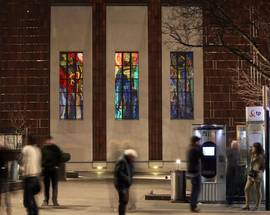 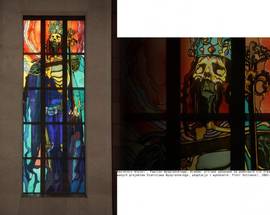 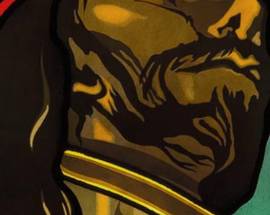 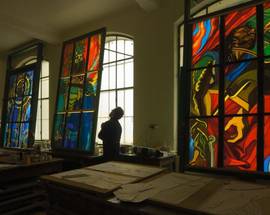 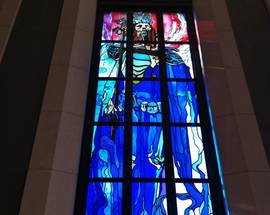 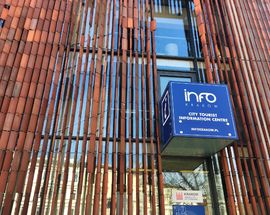 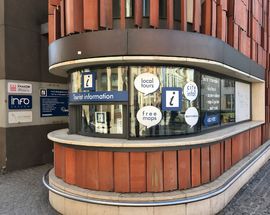 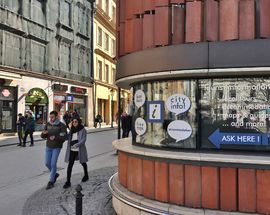 Following his work on St. Francis Basilica, Wyspiański was commissioned to design a triptych of windows for Wawel Cathedral. At the time, however, the artist's haunting portrayals of St. Stanisław, Kazimierz the Great and Henryk Pobożny were deemed too grotesque and controversial to instal, and the project was shelved until director Andrzej Wajda resurrected the idea of producing them 100 years later. Using Wyspiański's designs, the work was carried out by Piotr Ostrowski of the Stained Glass Museum and a building designed by Krzysztof Ingarden specifically for displaying them was erected near St. Francis Basilica in 2007. Curious for its facade of rotating brick panels and the fact that it is not suited for displaying stained glass at all (facepalm), the tiny building is too narrow to view the windows from inside, and natural light is not even able to pass through it. As a result, the out-facing windows are lit from inside and best viewed at night. Martyred Polish heroes St. Stanisław (on the left) and Henryk Pobożny (on the right) are shown Christ-like at the moment of their deaths, while Kazimierz the Great's bare skull bears the royal crown between them. The building also serves as a tourist information point.

'God in the Act of Creation'

Pl. Wszystkich Świętych 5
featured
/krakow/god-in-the-act-of-creation_131292v
If you only visit one church in Kraków, make it St. Francis Basilica. Built in the 13th century, St. Francis' was the first brick building in Kra
see more
Featured