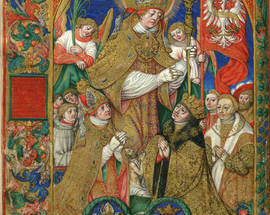 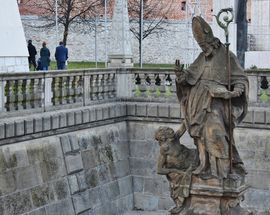 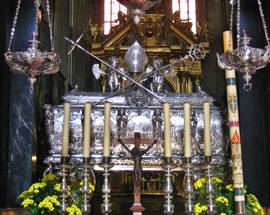 One of the main patron saints of Poland, St. Stanisław of Szczepanów served as the Bishop of Kraków between 1030 and 1079, under the reign of King Bolesław II the Bold (also known in turns as ‘the Generous’ and ‘the Cruel’). His successes included bringing papal legates to Poland and reestablishing the Gniezno metropolitan see, but his power and influence soon lead to direct conflict with the monarch. The first issue was a dispute over a piece of land which Stanisław purchased from a fellow named Piotr, who died soon thereafter; Piotr’s family then claimed the land for themselves, and the King ruled in their favour. There was only one thing to do - in a spectacularly self-serving display of supernatural power, Stanisław resurrected Piotr so that he could confirm that he had sold the land to the Bishop, after which he was graciously returned to the ground. The second, more serious feud involved the Bishop criticising the King’s sexual promiscuity and brashly excommunicating him from the Church. There were also rumours that Stanisław was involved in an opposition movement intent on overthrowing the king; needless to say, he was living dangerously. In response, the enraged king accused him of treason and - when he failed to show up to court - had him assassinated while he was celebrating mass at Skałka; in some accounts the King even stabbed the Bishop himself. According to legend, Stanisław was dismembered and thrown into the pool in front of the Skałka Church, where - as four eagles appeared to watch over the process - his mutilated parts then proceeded to miraculously reassemble themselves, but surprisingly stopped short of reanimation; presumably he thought he could accomplish more as a martyr. And he did, posthumously winning his spat with the King when outrage over his death lead directly to Bolesław’s dethronement and banishment.

Aside from his gruesome death and the shady resurrection tale of Piotr, Stanisław had few other claims to sainthood as far as mystic visions, healing powers, and gory stigmata are concerned. What precipitated his canonisation process was an analogous case occurring in England, where Thomas Becket was granted the status of martyr-saint. Becket was the Archbishop of Canterbury, murdered in 1170 by followers of King Henry II due to going excommunication-happy on Church members who exceeded their privileges and pissing off the monarch - something that rang a bell with Stan’s followers. Stanisław’s cult began to grow immediately after his death, and he became an even more important figure when Poland’s period of feudal fragmentation began in 1138, which was viewed by many - including the monarchy - as punishment for the martyr’s death; it was hoped, however, that Poland would reintegrate much like his mutilated body - he even became known as the patron of unification due to this post-mortem stunt. To this day, yearly processions commemorating Stanisław’s assassination on May 8th march from Wawel Cathedral, where his relics were moved in the 13th century, to the Skałka Church in Kazimierz.
Churches

ul. Skałeczna 15
/krakow/skalka-the-pauline-monastery_17087v
Also know as the 'Church on the Rock,' this gorgeous riverside sanctuary is one of the most important religious sites in Poland. It was here - or rather at the …
see more
Wawel

Wawel 3
/krakow/wawel-cathedral_17085v
The scene of the crowning of almost every Polish king and queen throughout history, the current Wawel Cathedral is the third to be built on the site. The first …
see more