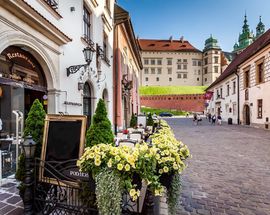 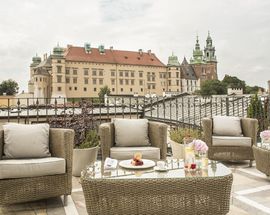 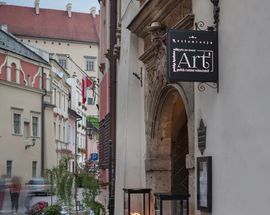 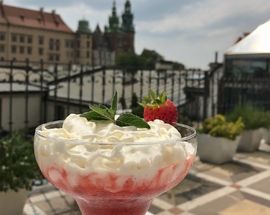 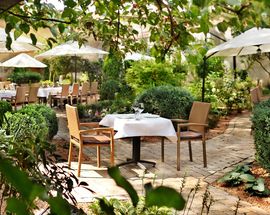 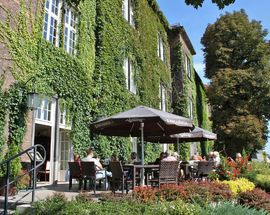 You've just finished an engrossing, but exhausting tour of Kraków's Wawel Royal Castle, and no amount of chakra vibes will soothe the grumbling of your tummy. It's time to find some food - fast - and refuel for the evening ahead. So what are the best restaurants near Wawel?

Well for starters, it's worth noting there are a couple of cafes with limited food options directly inside Wawel itself; that said, the city has been wise to keep Wawel a cultural and historical destination, rather than a commercial or even culinary one. None of the options inside Wawel are particularly worth considering for a proper meal unless your kid is already on the brink of a crisis, or you have time to kill before or between timed tours.

While there are an endless number of restaurants within walking distance in both the Old Town and Kazimierz, we've limited ourselves here to those options that are literally only a few minutes walk from one of the Wawel exits. You might be surprised to discover that there aren't dozens of restaurants right on the ramparts of Wawel; indeed the entire area around the castle complex is far less commercial than it might be if located in...say...well, anywhere in the US. For the highest volume of eating and drinking options after exploring Wawel, head back towards the market square via ul. Grodzka.

Below we list our top recommendations; follow the links for GPS locations, opening hours and other details.

COPERNICUS RESTAURANT
exclusive | tasting menu | views
Exiting Wawel to the north (onto ul. Podzamcze) in the direction of the market square, deposits you right at the top of ul. Kanonicza, which is home to some of Kraków's most exclusive and exquisite restaurants. Chief among them is Copernicus, located inside the 5-star hotel of the same name. Consistently rated as one of the best restaurants in Kraków for the past ten years, Copernicus hasn't lost a step on the competition. If your aim is unforgettable elegance, this is it: dine in the beautiful Gothic cellars or on the summer terrace, with views of Wawel that will make you feel like you haven't even left the castle complex. When it comes to Copernicus' modern European cuisine, you'll want to try as much of it as possible, and you can thanks to 5- to 12-course seasonal tasting menus.

ART RESTAURANT
tasting menu | wine pairing | garden
Located in another gorgeous medieval townhouse on ul. Kanonicza, Art restaurant opened in 2018 and immediately won a World Luxury Restaurant Award for 'Best Restaurant serving Polish Cuisine' in the world. Whether it's better than its neighbours is grounds for debate, but there's no doubt that Art is among the city's top restaurants in terms of location and taste. To wit, Art only offers tasting menus, and boasts a peerless wine cellar, as well as signature cocktails. Again, you're in exclusive territory here, but if you arrive before 16:00 you can enjoy a 5-course lunch for only 84zł. Make sure you have a reservation in the evenings.

THE OLIVE
modern | Polish | piano recitals
The flagship fine dining restaurant of the Kraków Sheraton, The Olive has won its fair share of awards while inviting guests to dine on Polish and Mediterranean dishes in their airy, glass-ceilinged atrium, accompanied by live piano recitals.

FIORENTINA DOM POLSKI
design | garden | steak
Located in one of the last locales on Grodzka before Wawel, Fioretina offers contemporary European cuisine in a gorgeous interior that balances rustic touches with gleaming fixtures. As such it feels both refined and relaxed simultaneously. Large enough for groups, you should be able to score a table in the afternoons, but it's always wise to reserve in evenings.

LA CAMPANA TRATTORIA
garden | italian | romantic
With spot-on decor, quality Italian food, and romantic medieval cellars, La Campana falls firmly into Kraków's upper middle-class category of restaurants that are highly competent and very worthwhile. But in the summer it boasts one of the very best gardens in the city, making it one of Kraków's most profound eating experiences. Full of singing birds and creeping ivy, this is one better suited for couples than kids.

METAFORMA DESIGN CAFE
coffee | vegan/vegetarian | patio
If you've exited Wawel via Dragon's Den, there's no place closer than Metaforma, which is located right on the river. Offering everything you could possibly want, including a large sunny patio, this multi-faceted cafe also functions as a bar (with craft beer and wine), bistro (cheap vegetarian and vegan eats), art gallery and shop selling Polish design. If you're crashing and need a place to pitstop, you couldn't hope for better.

BROPUB CRAFT BEER & BURGERS
multi-tap | pub grub | outside seating
Maybe after a trip around Wawel, the main thing you want is a beer? Though it's a tiny bit further than the other places listed here, head to the garden of BroPub - the flagship brewpub of Brokreacja, a local microbrewery based just outside Kraków. Kraków has a few breweries, but Brokreacja is one of the best, with a wide range of their delicious ales on draught. They also offer burgers and other pub food, and most of the space is outside in their courtyard garden.

POD WAWELEM
beer hall | play area | polish
Perfect for families and large groups, this Austrian-style beer hall boasts huge portions of cheap local food, litre beers, and a fantastic indoor playground for kids. Despite plenty of space inside and out, it's still popular enough to create queues at the door, and the staff seem to use the endless bustle and racket inside the restaurant as an excuse for not being particularly attentive or accommodating. Still, it's cheap, kids will love the play area and even probably eat the food.

ul. Stradomska 11
/krakow/bropub-craft-beer-burgers_151312v
The flagship bar of Brokreacja - a mad decent microbrewery in Szczyrzyc, about 45km away. BroPub offers 16 taps, almost exclusively of their own stuff, with …
see more
International

Pl. Na Groblach 22
/krakow/malecon_162949v
When it comes to real estate, this is some of the best in Kraków, and it's been used to great effect. Just metres from Wawel Castle in Hotel Pod Wawelem, …
see more
Polish

ul. Kanonicza 15
/krakow/art-restaurant_145079v
This newcomer to one of Kraków's most ancient, romantic and exclusive streets has wasted no time in establishing itself among the city's finest restaurants, …
see more
Polish

Bulwar Czerwieński (near Wawel)
/krakow/cc-stefan-batory_133449v
Poland has a history of semi-famous vessels named after semi-famous 16th-century king Stefan Batory, and this modern, multifunctional riverboat carries on that …
see more
Polish

ul. Św. Gertrudy 26-29
/krakow/pod-wawelem_33621v
The place to visit if you’re looking to hit your daily calorie quota in one meal. Huge portions of standard Polish fare cascade off the steel pans and wooden …
see more
Cafes

Wawel 9 (in the courtyard next to Wawel Visitor Centre)
/krakow/slodki-wawel_112452v
As well it should be, the flagship sweets shop of this well-known and well-loved local chocolatier and confectionery is located in the courtyard of Wawel …
see more
International

ul. Kanonicza 16 (Copernicus Hotel)
/krakow/copernicus_16799v
Inside one of Kraków's most exclusive hotels you'll find one of its most exclusive restaurants, with high-class service inside an elegant gothic interior that …
see more
Polish

ul. Kanonicza 22
/krakow/pod-nosem_131037v
An elegant upscale dining experience on Kraków's oldest street, 'under the nose' (as the name translates) of
see more
International